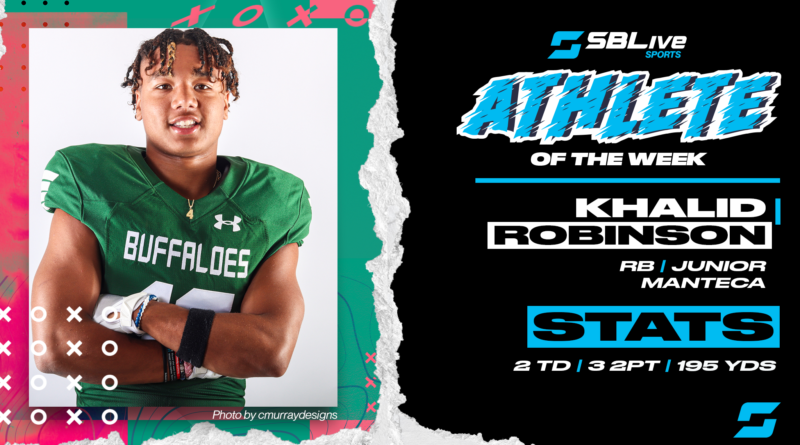 Congratulations to Manteca running back Khalid Robinson for being voted SBLive’s Northern California High School Athlete of the Week for March 22-28!

The junior rushed for two touchdowns, three two-point conversions, and 112 yards for the Buffaloes while adding 83 receiving yards in their win over Ripon.

Robinson ran away with this week’s honor, receiving 75.87% of the total vote.

Jayden Mandal, Buchanan QB: Mandal led Buchanan to a 31-28 win over Central with three touchdown passes and a rushing touchdown.

Jonah Coleman, Lincoln (Stockton) RB: The Arizona commit ran for three touchdowns and caught for another in a 71-6 domination of Tokay.

Will Cuddie, Valley Christian LB/K: Cuddie made seven tackles on defense and went two for two kicking field goals (43 yards and 34 yards) in a 19-10 win over Archbishop Mitty.

Jorge Gonzalez, Tulare Union QB: Gonzalez led the Tribe to a 53-7 rout Wasco with five touchdowns passing and one more on the ground.

Aydan Edwards, Vista Del Lago (Folsom) QB:Edwards threw for four touchdowns and ran for a fifth in a 40-31 upset win over Folsom.