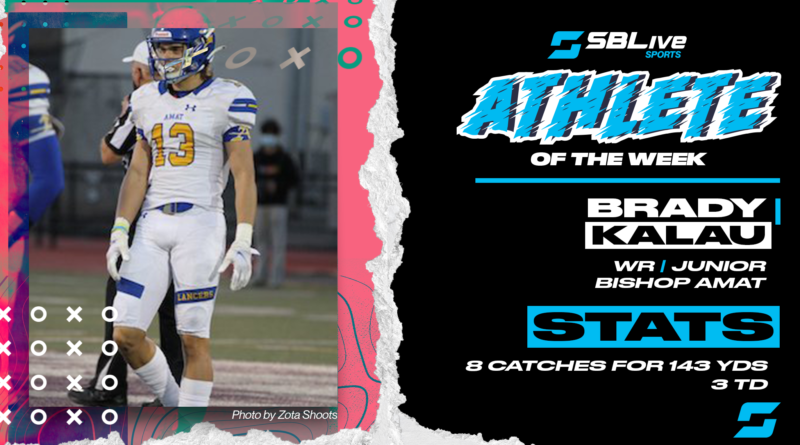 The junior had eight catches for 143 yards and three touchdowns in a loss to Alemany on Friday.

Kalau received 50.57% of the vote, beating out La Habra’s Craig Zackery who finished second with 46.4%. There were over 55,000 votes tallied this week!

DJ Harvey, Sierra Canyon WR/DB: Harvey had a huge performance on both sides of the ball on Friday night. The Virginia Tech-signee caught six passes for 137 yards and two touchdowns while also making three tackles, grabbing an interception, and collecting a sack.

Colt Fulton, Santa Margarita QB: Fulton threw for 403 yards and had four touchdown passes to lead the Eagles to a 42-0 win over JSerra.

Eric Denham, Corona Centennial WR: The sophomore caught four passes for 126 yards and three touchdowns in the win over Santiago.

Drew Faulkner, Western WR/DB: Faulker caught three passes for 52 yards and two touchdowns on Friday night and also returned an interception 102 yards for a touchdown in the win over Savanna.

JJ Conrad, Yorba Linda WR: Conrad reeled in six passes for 123 yards and three touchdowns to help the Mustangs in their shutout win against Canyon.

Larry Turner, St. Bernard WR: The Arizona State commit had seven receptions for 111 yards and a touchdown against Loyola on Friday.

Richie Munoz, La Salle QB: Munoz showed off his dual-threat ability on Friday night, passing for 200 yards and three touchdowns while also rushing for 82 yards and an additional touchdown.

Donovan Harvey, Elsinore RB: Harvey only carried 11 times on Friday night, but finished with 172 yards and three touchdowns in the win over Hemet.

Freddy Fletcher, Cajon RB: Fletcher is following up his strong sophomore season with a fast start in 2021. He finished with 182 rushing yards and four touchdowns in Friday’s win over Beaumont.

Rodrigo Aguilar, Century RB: Aguilar made a huge impact in Friday’s 33-28 win over Santa Ana Valley. He had 293 total yards and four touchdowns while also grabbing an interception and forcing a fumble.

Lucas Pesak, Tesoro RB: Pesak had 189 rushing yards and two touchdowns to help the Titans to a big second half and a victory over Trabuco Hills.

Vance Johnson, California RB: Johnson had 19 carries for 168 yards and two touchdowns to help the Condors to a seven-point win over Santa Fe.

Vance Jefferson, Poway DB: Jefferson caught two touchdown passes and had an interception to help the Titans take down Westview in week three.

Craig Zackery, La Habra: The sophomore rushed for 126 yards on 24 carries with three touchdowns in the Highlanders’ win over Sonora.

Daniel Rosenberg, La Jolla Country Day WR/DB: Rosenberg caught seven passes for 102 yards and a touchdown to help take down Mountain Empire. He also had four tackles and a forced fumble on defense.

Mark Sladack, Rancho Bernardo QB: Sladack was six of nine passing for 134 yards and three touchdowns to help lead the Broncos to a 43-13 win over Del Norte.