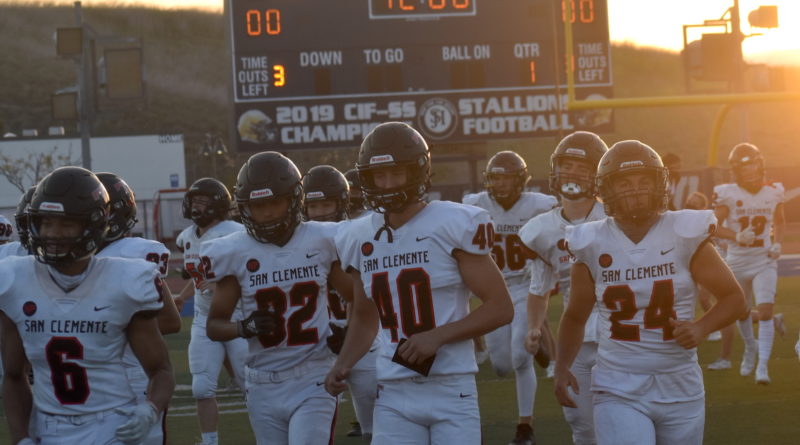 SAN JUAN CAPISTRANO– San Clemente showed why it’s a perennial South Coast League titan on Friday night, storming to a 21-0 halftime lead and never looking back in a 35-7 victory against San Juan Hills. The Tritons clicked on all cylinders, scoring on three of their first four drives and nearly shutting out an outstanding – albeit injury-plagued – SJH offense. Here are three takeaways from the game:

Bohls, a 3-star Arizona signee, was dominant running the ball, finishing with 176 yards and three touchdowns on over 10 yards per carry. Most of that production came in the first half, and he was on pace to push 300 yards had he needed to carry a heavy load in the second half. His 176 yards were a career-high mark.

3-star TE/WR Bentley Redden caught for a touchdown and nearly 100 receiving yards on offense, and was also a major factor at DE for a front seven that dominated for most of the game. San Clemente’s biggest contribution up front came from DE Kanious Vaughn, who registered three sacks and helped quell any sense of a late SJH comeback. Lachlan Van Rosmalen threw for 169 yards and a TD in an efficient, consistent manner, and the Tritons really didn’t have any weak links across the board.

“You guys did everything we asked of you,” San Clemente head coach Jaime Ortiz told his team after the game. “We executed, we stayed together… and we took it to ’em.”

After a strong defensive stand in the third quarter, the Stallions had their best drive of the game. RB Nathan Grande made consistent gains for first downs, and Hudson Jones found Dashiel Ross to make it 28-7 with 10:32 left in the game. SJH successfully retrieved an onside kick in the ensuing kickoff, and finally had some momentum.

But San Clemente’s defense quickly recovered to force a turnover on downs with 7:23 left in the game, punctuated by a sack from Vaughn. Another highlight touchdown run from Bohls with 3:39 left in the game was merely icing on the cake.

SAN JUAN HILLS IMPACTED BY INJURIES, BUT SHOW RESILIENCE IN SECOND HALF

While this was a well-deserved wire-to-wire victory for SC, the injury situation for San Juan Hills made this a particularly challenging week for the Stallions. They were missing 3-star WR Braden Pegan and their second-leading receiver, Cole Monach, plus QB Hudson Jones was banged up. To make matters worse, one of their defensive focal points, NG Elliot DeGroote, exited the game in the first half with an injury and did not return. It would already be an understatement to say there’s no room for error against San Clemente, but the presences of the injured players were missed on every drive.

With the offense nearly dead in the water, and the defense struggling to stop SC’s relentless combination of short passes and Bohls runs, this game was at risk of getting ugly by halftime. Instead, San Juan Hills came into the second half with much more energy and physicality all over the field, even against a strong, physical opponent, and had a very respectable second half effort. A three-score game in the fourth quarter was the closest it got, but it was not the type of loss that saps a good team of all its moment.