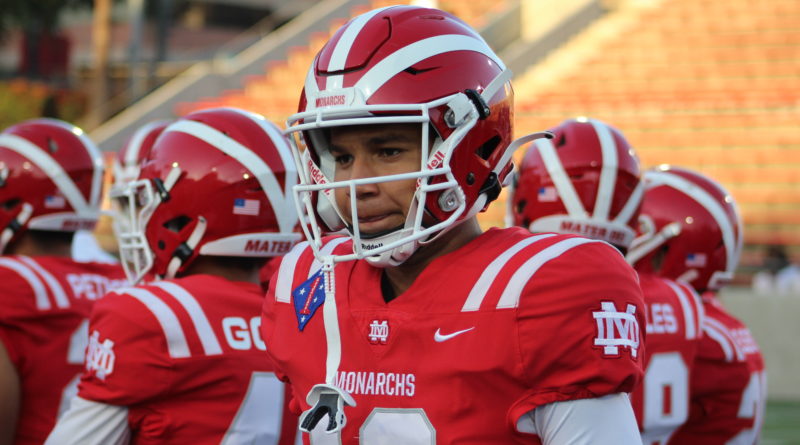 “The penalties, what can you say? I think we might have set a world record tonight,” he said.

Saturday’s game was ugly, especially thanks to seven Mater Dei defensive pass interference penalties. But it was equal parts gritty and the Monarchs, although they never trailed in the game, needed to make a play in the final seconds to ensure victory. Servite quarterback Noah Fifita wound up to throw a Hail Mary with four seconds to play but was strip sacked and the clock ran out.

“What you saw tonight was a classic Mater Dei Servite game,” Rollinson said. “They gave us everything we could handle.”

Below are three takeaways.

On Servite’s first play from scrimmage, Noah Fifita threw a screen pass that Tetairoa McMillan wasn’t expecting and Mater Dei defensive back Cameron Sidney caught it and ran untouched into the end zone for a 22-yard touchdown. It was a major error in what ended up being a seven point game.

Following the pick-six, Yetts busted free for a 77-yard touchdown that put Mater Dei ahead 14-3. The Friars responded with a Fifita to McMillan 32-yard touchdown connection, but after that Mater Dei answered with its best drive of the game.

Elijah Brown ran for a first down on third down and 17 and then hit CJ Williams for a big-gainer on a fourth down and three to set up a Raleek Brown two yard TD, which made the score 21-10 Mater Dei.

Servite outscored Mater Dei 7-3 in the second half, but it wasn’t enough. That late second quarter touchdown drive ended up being the difference.

“Think about the pressure he was under,” Rollinson said. “He had some key throws, some of those first downs were all on Elijah.”

THIS GAME WAS ‘THE WAY THE TRINITY LEAGUE SHOULD BE’

“This is how it should be,” Servite head coach Troy Thomas said postgame. “It should come down to the end. That’s what’s fun about this league.”

Mater Dei and St. John Bosco have dominated the Trinity League for the last decade and this spring Servite was hoping to win its first Trinity League title since 2011. It won’t happen this year following Saturday’s defeat, but for the first time in years the Friars are close to the top and they’ll keep pushing next season with Fifita and McMillan returning.

“We’re a few plays away,” Thomas said. “And it was the same thing at Bosco, it’s those fourth down stops, those are plays you gotta make.”

MCMILLAN VS. JACKSON LARGELY A FLAG-FEST

Jackson did have a key stop on McMillan on Servite’s last drive of the game though.

For all of the flags, Rollinson enjoyed the matchup.

“I thought the battle between Domani Jackson and T-Mac is why people come to high school football games,” Rollinson said.