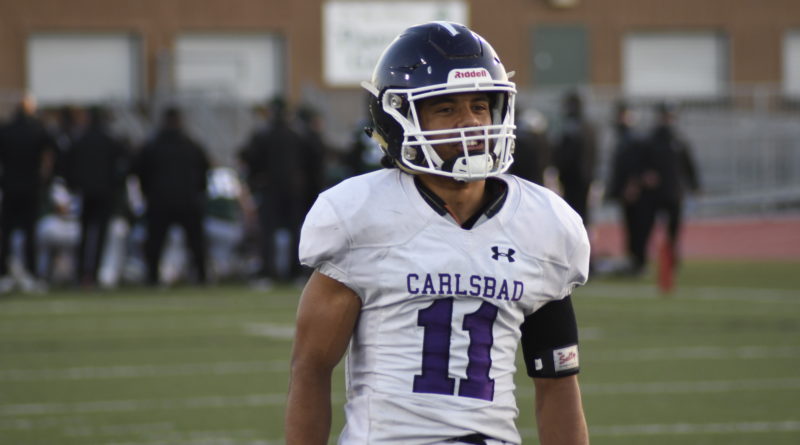 OCEANSIDE — After holding a one-point lead at halftime, Carlsbad scored 16 unanswered points in the third quarter to grab a comfortable lead on Oceanside and coast to a 30-12 victory at Simcox Field on Friday. Below are three takeaways from the game.

Carlsbad entered Friday’s game having only surrendered nine points over two games so far and continued their strong play on the defensive side against Oceanside, allowing the Pirates a touchdown at the start of the second and fourth quarters.

Carlsbad got the scoring started on Friday when their offense was put into position thanks to an interception from senior Tyler Nolte.

“The quarterback was looking at the receiver most of the time so I ran over there and got the tip luckily,” Nolte said of his play that set up a Mazlo Norwood nine-yard touchdown run for the game’s first score.

“We’ve been game planning all week and just getting prepared, we knew some of their plays,” Nolte said.

In addition to rushing for 137 yards and two touchdowns, the five-foot-nine Norwood was tasked at times with defending Oceanside’s six-foot-five receiver Kamron Beachem.

“I don’t know, you just gotta play,” Norwood said with a chuckle after the game. “They really didn’t throw the ball to him much.”

Oceanside found themselves only trailing by a point at halftime despite only significant offensive drive in the first half. They were able force Carlsbad into a punt to begin the second half but immediately snapped the ball over the head of quarterback Jakob Harris and go into the end zone. Harris was able to dive on it to make it a safety, but the ensuing kickoff gave Carlsbad great field position and lead to a Lancer touchdown exactly one minute later.

Despite not having the opportunity for playoffs to finish out the season, Carlsbad has looked motivated this season coming off of an Open Division Championship appearance to finish the 2019 campaign.

“Well, this is our last season as seniors, so we go out there with everything we’ve got and try to put it on for the city,” Nolte said.

The Lancers entered the season ninth in SBLive’s San Diego Section Top 10 and have vaulted to third, outscoring their opponents by 100 points (121-21) in just three games.

“Like it’s our last, just keep playing,” Norwood said of how he’s approaching the season. “We came into the season working and we were really working all offseason, we were just getting ready.”