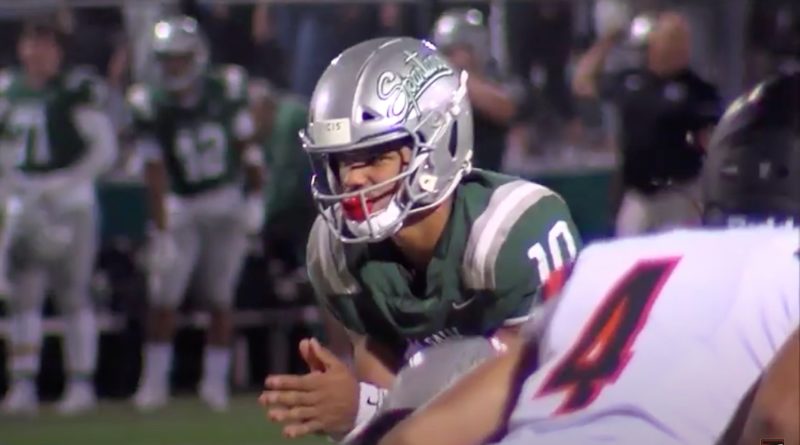 With every high school football team now playing in the Bay Area, here’s a look at our Top 10 teams as of March 31.

The Spartans battled to get a win against St. Mary’s in their opener. Since then it’s been smooth sailing for the Bay Area’s perennial best team. The Spartans always use a crew of running backs in their offense, fleet of foot senior Makhi Norfleet leads that group this season with senior quarterback Dorian Hale doing a great job making the offense run perfectly. The Spartans come off a 49-6 win over league rival San Ramon Valley heading into this week’s game with Jesuit of Carmichael.

The Pirates are undefeated at 2-0 and looking at their biggest test of the year this week against Liberty. Senior quarterback Eli Brickhandler is doing a great job with 264 yards passing, four touchdowns and no interceptions for the Pirates. A win this Friday at home against Liberty would likely mean a perfect 5-0 season for Pitt.

An opening week win for Serra over Valley Christian makes the Padres the team to beat in the CCS. Hassan Mahasin calls himself the missile, but he should be called the assassin Mahasin the way he has destroyed defenses this season. The Padres will be tested again this week against Saint Francis and on the final game of the season against St. Ingatius.

The Cardinals picked up a huge win in a Tuesday night game this week against Rancho Cotate 24-6. The win shows the Cardinals deserve to be in the top 5. The Newman defense came up huge in this game with seven sacks and two fumble recoveries.

After the close loss to Serra the Warriors were impressive in a win against a strong Mitty squad. The Warriors defense played very well in a sloppy game with lots of fumbles. The defense is definitely ahead of the VC offense right now. Senior Chase Laubach is a fiery leader on both sides of the ball.

The Lions roll into this week’s game with Pittsburg 2-0, but the level of competition is much tougher against the Pirates. Sophomore Nate Bell replaces Jay Butterfield who is now at Oregon. Bell has thrown for 210 yards in the first two games.

The 3-0 Cougars are an offensive powerhouse. Senior quarterback Jacob Griessel has thrown for 526 yards in the three games. Senior running back Dillon Thoms has rushed for 380 yards. Thoms is the grandson of former Oakland Raiders great Art Thoms.

The 2-0 Wildcats will get their first test this season this week against Mountain View. The Cats feature outstanding senior running back Adam Garwood who is the nephew of Pat Tillman. Garwood has run for 301 yards in the Cats’ two wins.

The Chargers will meet Los Gatos next Thursday in what will be the game of the season in the De Anza division. Junior Luther Glenn is a strong, speedy back for the Chargers. Glenn has rushed for 215 yards so far this season.

The Wildcats are led by outstanding senior running back Matteo Perez. Perez ran for 116 yards in the Wildcats most recent win over Windsor. The UC Davis commit leads a solid WIldcats offense including impressive Junior quarterback Michael Ingrassia.