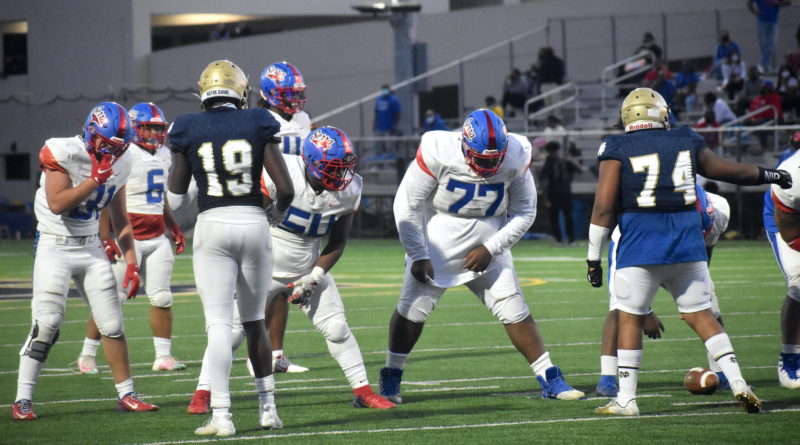 SHERMAN OAKS – Serra moved to 3-0 in Mission League play on Thursday in a 29-14 win against Notre Dame. Texas commit Maalik Murphy threw for three touchdowns, two of which were caught by Devin Ford, and the Cavaliers’ defense held Notre Dame to one score until the waning minutes of the game.

While the Cavaliers’ offense hasn’t been as explosive as some expected this season, it has come up clutch and gotten the job done in all three Mission League games. And more clicks on that end for the Cavs in every game they play, with Thursday’s 29 points being a season-high.

The bigger story so far for Serra this season has been its outstanding defense, which has only allowed 34 points in three Mission League contests, led by a particularly athletic front seven.

Led by 3-star seniors Lando Brown and Tyray O’Dell and supplemented by Jeramie Jones and D’Angelo Davis, the Cavaliers’ linebacking unit is not massive in terms of physical measurables. But that group is one of the best pass-rushing forces in SoCal, and it’s also very adept at swarming rushers or receivers of short passes who come into the box. Brown came into this game with 36 tackles, 10 tackles for loss, and six sacks already in just three games, and he, O’Dell, and an energetic defensive line led the charge in keeping Notre Dame QB Javance Tupouata-Johnson from feeling any security in the pocket.

The Cavaliers’ defense held Notre Dame scoreless through one half, and the offense had already pulled away by the time Serra allowed a second touchdown.

Serra entered the season a favorite to win the Mission League, and the Cavaliers are only two weeks away from potentially finishing their quest. With their defense delivering on high expectations and a talented offensive group finding its footing, they are still in position to potentially pull it off.

With Murphy, Ford, WR Darrian Anderson, and RB Elijah Davis at the skill position spots, plus one of Serra’s biggest offensive lines in years led by AJ Nkele (6-8, 330) and Marion Miller (6-5, 350), all the tools are there to make this their year to emerge atop the Mission League. The Cavaliers have another gear or two in them on offense, and now is the time to reach it with Bishop Amat and Alemany remaining.

It’s been a challenging season so far for Notre Dame, which entered the season with aspirations and potential to compete for a high finish in the Mission League. Throw in some untimely injuries and no preseason, and it doesn’t take much for any team in one of the West Coast’s most competitive leagues to skid, even with a lot of senior impact players on the team.

That said, the Knights were both highly competitive and graceful in defeat, pushing a team with more established (and healthy) D-1 talent for 3.5 quarters via a gritty defensive effort. Late in the game, the Cavaliers began racking up penalties once they started pulling away, and Notre Dame kept its composure while still showing plenty of fight. That’s the sign of a football program in great shape even in the face of adversity.

Also, Notre Dame has some promising young talent emerging, and high 3-star sophomore QB Javance Tupouata-Johnson displayed some of his massive upside in this match. Johnson already stands nearly 6-5 with a strong build and very good athleticism for a pro-style QB. Facing a dominant pass-rush, he was still able to extend plays and get off some great passes. While those moments of development didn’t translate into major offensive production in this one, it shows that the Knights’ offense is in very good hands for the next couple of seasons.