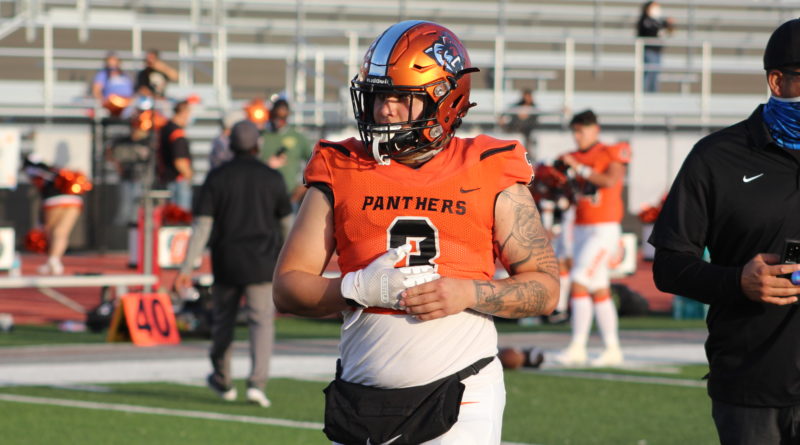 ORANGE — Following Orange’s 73-20 blowout win over Long Beach Millikan on Thursday night, Panthers head coach Robert Pedroza couldn’t bring himself to say if this was the best team he’s had in his six years at the school.

“There’d be a lot of disappointed people if I said that,” he said postgame.

But then he continued, “this is a very, very good football team we have here.”

It’s true. Orange has been one of the surprise teams of the spring football season. Led by senior quarterback/linebacker Daylen Pedroza, Orange has the makings of a contender, which is why for as good as the team has looked through their 4-0 start, the lack of a postseason this spring hurts.

“It’s sad that we don’t have playoffs to see exactly how good we really are,” Pedroza said. “It’s tough. COVID hit and there’s nothing we can do about it.”

Under Pedroza’s leadership, Orange advanced to the Division 9 Southern Section semifinals in 2019 and won Division 13 in 2017. It’s impossible to say what division Orange would have been in this season due to the Southern Section not grouping teams until after the regular season is over, but this year’s Panthers squad looks like a team that could make noise in the Division 4-6 range.

“We just have a bunch of kids that love to play football,” Pedroza said. “They enjoy the process and enjoy the work. We’ve got great senior leaders and great underclassmen.”

With no playoffs, Orange’s biggest game of the year comes April 16th on the road against Orange Coast League rival Santa Ana.

For this season, that will serve as a championship game for a team that would have had championship aspirations in a normal year.