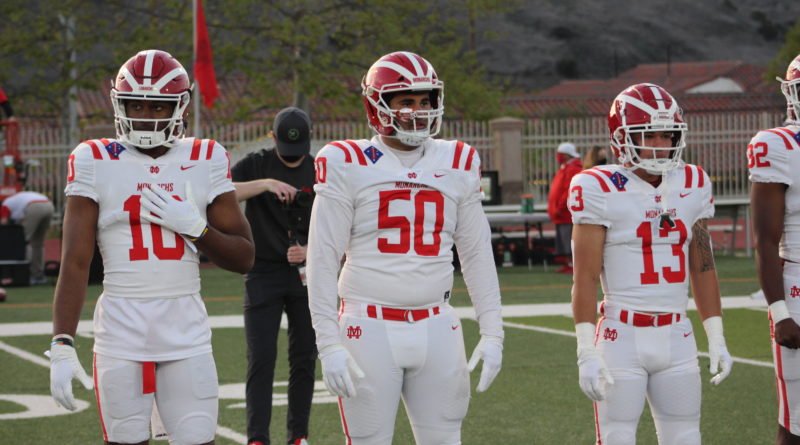 Here are the Top 10 Southern California high school football games to watch in Week 4 of the 2021 spring season (April 1-3).

The newest version of the Angelus League kicks off this week with an exciting pair of games. Reigning CIFSS Division 5 finalist St. Paul won the Del Rey League last season and has now swapped leagues with Salesian, but doesn’t return much of its 2019 core. Crespi is led by a pair of talented QBs in Sloan Senofsky and Zachary Siskowic, RB Khallid Calhoun, and DB Robert Rosebaugh. The Celts are the favorite to win this game after starting the season off with major statement wins over Calabasas and Westlake, but all four teams in the Angelus League are threats to win the title.

After dropping a league game for the first team in years against Los Alamitos, CdM rebounded forcefully to beat Huntington Beach 49-6 last week. The Sea Kings might not be able to attain a Sunset League title this season, but are still the favorite to land a silver medal. Newport Harbor is out of the league race after losing against Edison, but the Sailors have a strong squad with high aspirations. Neither of these teams need any extra motivation in this major rivalry match.

While Serra is still yet to reach peak form on offense, the Cavaliers are still alive and well in their Mission League title hunt. With 0-2 Notre Dame struggling, it would be the perfect time for a statement win, but the Knights could also have a bounce-back game in store. Serra’s defense, led by LBs Lando Brown and Tyray Odell, has only allowed 20 total points the last two games, and Notre Dame has only scored 11, so it would likely take a significant offensive breakthrough for the Knights to come out on top.

Speaking of the Angelus League, every one of its games is a potential league championship match and potential instant classic. Loyola is the league’s other newcomer, coming over from the Mission League in a swap with Cathedral.

Coming off a Southern Section Division 4 finals appearance, the Cubs are arguably the favorite to win the title after a very impressive non-league win over St. Bernard. They have the most established Division 1 talent in the league, and are led by outstanding tandems at CB and RB in Ceyair Wright and Zakhari Spears, and Tahj Owens and Harrison Allen, respectively. However, they face a real test by a St. Francis squad that has already picked up impressive wins over Mira Costa and Garces Memorial, with a talented roster including 3-star APBs Bryson Reeves and Max Garrison, TE/DL Evan Jernegan, and QB Jack Jacobs.

Riding what has been an outstanding defense through two games, Ventura might be on the verge of pulling off a huge underdog Pacific View League title run. The Cougars defeated Rio Mesa to start the season and stunned reigning league champion Oxnard 18-13 last week. This week will likely be what decides the race as Ventura now has to go through reigning Southern Section Division 6 and CIF 2-A state champion Pacifica.

The Tritons return next to none of their championship core, but they’re still a force. They won this battle 49-7 last season, but whoever wins this time, it’s guaranteed to be much more evenly matched.

One of the best football players in the state, 3-star Fresno State commit QB Jaylen Henderson, has made a late return to the Eagles after initially opting out of his senior season. And Chaminade hit its stride offensively in his second game back last week in a 27-2 win over Notre Dame (Sherman Oaks), which also featured a big performance from breakout RB Paul Holyfield Jr. Now the Eagles take aim at reigning Mission League champion Bishop Amat, which Alemany just handed its first loss in league play since Chaminade won it in 2017. The Lancers have few returners from last season, but do have a very good QB themselves in Tobin O’Dell, giving this the makings of a high-level quarterback duel.

Torrey Pines started the season in brutal fashion, losing a combined 83-0 against powerhouses Cathedral Catholic and Carlsbad, so beating a very good El Camino team 24-13 was a heck of a bounce-back showing. Now the Falcons have to deal with another Avocado League contender, Mission Hills, which has beaten Oceanside and Temecula Valley by a combined 66-14. Mission Hills won’t face Carlsbad this season because there were too many league games to play in the shortened season, so a tie atop the league is possible between them. That means Torrey Pines might have a silver medal at stake this week, and for the Grizzlies, something more like a gold.

San Juan Hills continues its debut in the South Coast League with a home game against incumbent second dog San Clemente. San Clemente is led by RB James Bohls, LB Caiden Robertson, and TE/LE Bentley Redden, and SJH features the QB/WR tandem of Hudson Jones and Braden Pegan. Both teams are 2-0 this season and have impressive 11-point wins over a very strong Capo Valley squad, so this should be a great game if that’s any indication.

Coming off a 42-0 domination of JSerra, the Eagles are on a tour de force this season, and OLu is next up – but the Lancers are a force as well, despite being 0-2 on the season. Orange Lutheran won this 28-14 in a defensive battle last season, a game that was up for grabs until its waning minutes. Both teams’ offenses feature talented D-1 prospects at QB, with Colt Fulton having a monster season for Santa Margarita and Logan Gonzalez leading the way at OLu.

And if you like battles in the trenches, this is the game for you. Santa Margarita has arguably the best D-line in the state in Derek Wilkins, Hero Kanu, Maurice Heims, and Matthew Auriemma. OLu’s offensive line, led by OT Jason White, is not only of California’s best, but probably its very biggest – at 6-5, 295, White is one of its “smallest” members. Additionally, SM’s O-line has been one of SoCal’s best this season too, and the Lancers are no slouch in the front seven.

Two-time reigning Trinity League champion Mater Dei has two blowout victories under its belt this season, but it might face a test this Saturday. “Might”, in the sense that Servite is a juggernaut, but one might say Mater Dei has a knack for beating juggernauts, and the Monarchs always bring their A-game against Servite. That said, this might be the best Servite team they’ve faced in recent years, a Friars squad that played St. John Bosco down to 10 points on Friday and wasn’t even playing the very best ball it can play – an upset is far from impossible here.

If Servite pulls it off, the Trinity League will officially be in unusual form – a three-dog race for a change. If Mater Dei maintains the status quo, and holds off Santa Margarita next week, then it will be a familiar scene on Saturday, April 17th, the last night of the 2020-21 football season: Mater Dei against St. John Bosco for all the marbles. We’ll find out on Saturday.