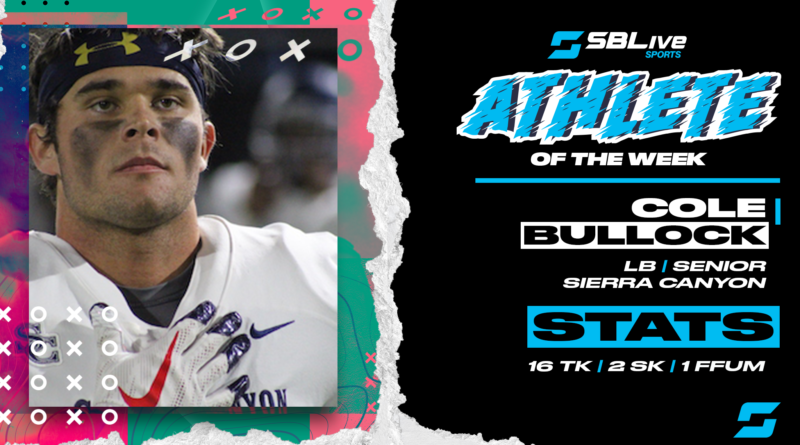 The senior had 16 tackles, two sacks, and a forced fumble against St. Bernard on Friday night.

Bullock received 46.14% of the vote, beating out Ayala QB Bryan Wilson who finished second with 26.47%. Saugus WR Hunter Girch finished third with 10.72% and Cathedral Catholic WR Rex Haynes finished fourth with 8.39%. There were over 29,000 votes tallied this week!

Kyle Crum, Norco QB: Crum was 15 of 19 passing for 227 yards and three touchdowns to help lead to the Cougars to a 51-6 win over Santiago.

Noah Aragon, South Pasadena QB: Aragon had 298 passing yards and one passing touchdown on Friday night, but did most of his damage on the ground with three rushing touchdowns.

Elijah Brown, Mater Dei QB: Brown was 14 of 18 passing for 165 yards and had three touchdown passes in his debut for the Monarchs.

Tyler Voss, Valencia QB: Voss passed for 435 yard and three touchdowns to lead the Vikings to a 63-20 win over West Ranch.

Braden Pegan, San Juan Hills WR: Pegan had five catches for 188 yards and a touchdown in the opener against El Toro on Friday.

Kaleb Most, Apple Valley RB: Most rushed for 139 yards and three touchdowns in Friday’s win over Serrano.

Jayden Denegal, Apple Valley QB: Denegal passed for 163 yards and a touchdown and added two more touchdowns on the ground.

Jason Oliveira, Patrick Henry RB: Oliveira rushed for 199 yards and a touchdown to help the Patriots take down Scripps Ranch, 34-14.

Joseph Denton, Central (El Centro) DL: Denton made his precense known on Friday night by make six tackles, four of which ended up as sacks.