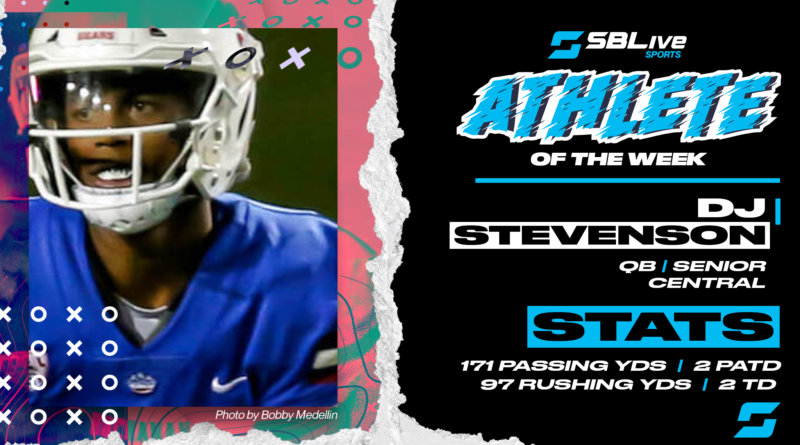 Stevenson ran away with this week’s honor, receiving 67.97% of the total vote.

Darian Leon-Guerrero, Vacaville RB: Leon-Guerrero ran for 171 yards and all four of Vacaville’s touchdowns in a 28-21 win over Davis.

Tyler Tremain, Folsom QB: Tremain threw for four touchdowns and ran for another in a 35-25 win over Granite Bay.

Ethan Menezes, Vista Del Lago RB: Menezes erupted for five touchdowns and 228 yards on the ground in a 63-6 blowout over El Camino.

Michael Ingrassia, Marin Catholic QB: Ingrassia led MC to a 35-0 rout of San Marin with 374 yards and three touchdowns in the air.

Isaiah Hidalgo, Central Valley QB: Hidalgo ran for three touchdowns and had a passing touchdown in a 42-6 win over Johansen.

Jackson Holt, Oakdale QB: Holt threw for 263 yards and a touchdown in a 38-35 win over Escalon.

Mason Davies, Mountain View RB: Davies ran for three touchdowns including a 75-yard dash in a 40-7 win over Santa Clara.

Mikey Ficher, Tulare Western RB/FS: Ficher ran for 178 yards and a touchdown on offense. He also led the Mustangs on defense with an interception and a deflection that another Mustang caught for an interception.

Michael Iriye, Mission Oak QB: Iriye threw for 133 yards and three touchdowns, and ran for 156 yards and another TD.

Nicholas Coronado, Kimball QB: Kimball nearly knocked off Manteca in a 44-38 loss, as Coronado completed 29 of 47 passes for 335 yards and four touchdowns. He also had 56 rushing yards.

Dylan Smith, Vintage RB: Smith ran for 196 yards and two touchdowns on just seven carries in a 57-0 blowout of Petaluma.

Shavon Gramps-Green, Biggs RB/DB: Green ran for 105 yards and two touchdowns in 52-8 win over Los Molinos, and also recovered a fumble on defense. Parker Finley also ran for two touchdowns for the Wolverines.

Max Rascon, St. Mary’s (Stockton) LB: Rascon recovered two fumbles, one of which he returned 76 yards for a touchdown.