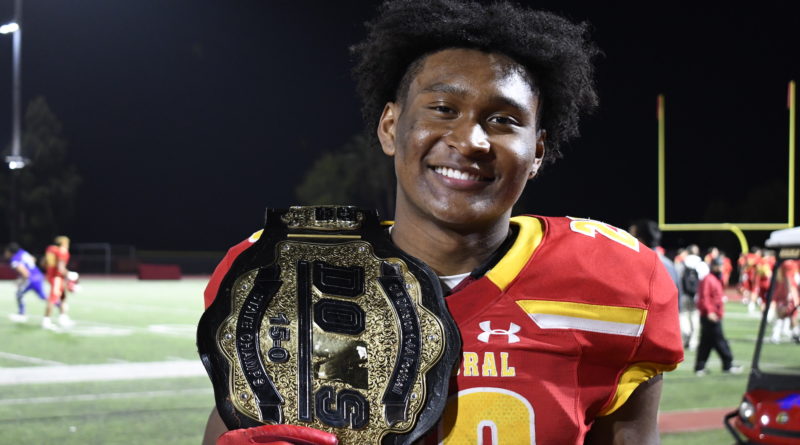 CARMEL VALLEY — After nine shutout quarters to start the season, Cathedral Catholic surrendered its first points of the season and found themselves trailing for the first time this season on Friday night. But the Dons rebounded quickly and stepped on the gas in the second half on their way to a 41-14 win over rivals St. Augustine in the 59th edition of the Holy Bowl.

Cathedral Catholic came into the game ranked No. 1 in the San Diego Section and No. 10 in the state.

Cathedral Catholic has had their fair share of top-tier running backs over time and may just have found the next one in line in junior Lucky Sutton. He carried 19 times for 191 yards on Friday night, giving him 462 yards through three games to go along with seven rushing touchdowns.

Cathedral Catholic Defensive Coordinator John Montali told SBLive in the offseason, “I don’t even know if he’s a sleeper anymore, but Lucky Sutton probably should have gotten some more carries last year, but is next in line for a Dons future star running back.”

Sutton carried 32 times last season in a backup role but was impressive enough to garner offers from four Mountain West schools including San Diego State. With the way the first half of his junior season has gone, many more schools are certainly on the way.

“I think that’s a great thing, thank you to him for saying that,” Sutton said of Montali’s comments, “but I don’t think about that too much, I just want to play my own game and ball out.”

Known for their outstanding rushing attack over the past few decades, Cathedral Catholic’s offense has reached the 40-point mark in all three games this season and has added a passing element not often utilized in years past.

Junior quarterback Charlie Mirer has now thrown for seven touchdowns over the Dons’ first three games, and is averaging nearly 30 yards per completion.

The junior duo of Mirer and receiver Rex Haynes had connected for three touchdowns coming into Friday night and added another one in the win against St. Augustine. Haynes entered the night averaging 39 yards per reception and has already surpassed his sophomore season totals in catches, yards, and touchdowns.

“Charlie’s my guy, our brothers were friends, so we’ve known each other since we were 12, we’ve always tossed the ball around,” Haynes said after Friday’s win.

In two games so far this season, Cathedral Catholic had outscored their opponents 90-0. After a Cathedral Catholic field goal to open up the second quarter, St. Augustine got a three-yard touchdown run from Gracen Halton to give them a 7-3 lead and put the Dons behind for the first time all season.

“It was nothing really,” Lucky Sutton said. “We started off at practice knowing it was gonna be a tough game so if they went up, we had to keep our composure and we just kept playing.”

The Dons didn’t take long to respond, with Charlie Mirer finding Colman Smith for a 39-yard touchdown reception after the St. Augustine kickoff went out of bounds to give the Dons excellent field position.

“Well, it’s nothing really knew to us, last year when we played Saints, they went up 14-0 on us. Overcoming adversity, especially against them in a big game like this is something… we practice like that,” Rex Haynes said.

St. Augustine got a big stop before the half when sophomore cornerback Jeremiah McClure intercepted Mirer in the red zone, but the Saints fumbled the ball back to Cathedral Catholic on the next play from scrimmage, allowing Lucky Sutton to run in from five yards out for his first touchdown of the night.

St. Augustine came out of the halftime break trailing 20-7 and got the Dons to punt the ball away on their opening drive but muffed the return, leading to another Charlie Mirer touchdown pass, this one going to Rex Haynes from 30 yards out, putting the Saints out of range for good.