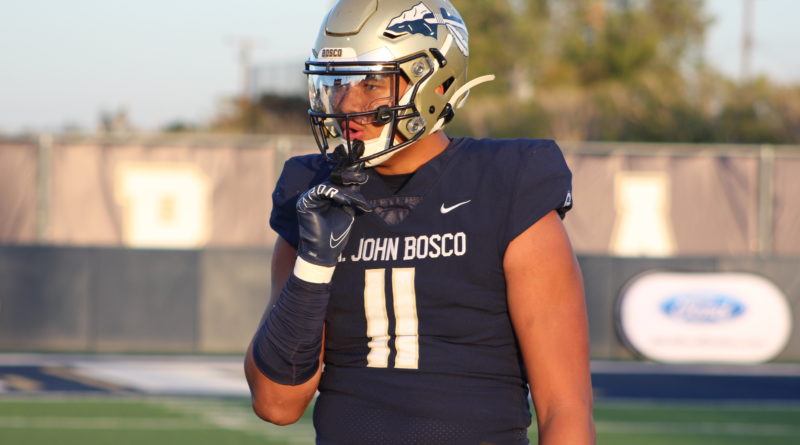 After older brother DJ led St. John Bosco to a Trinity League title in 2018 and state championship in 2019 at quarterback, California’s top high school football league is being introduced to younger brother Matayo this spring. And so far it’s been the same story for the Braves: they keep winning.

Matayo plays both ways as a defensive end and tight end and in a year when Servite had a legitimate chance to win their first league title since 2011, Matayo caught two scores to lead St. John Bosco to a 38-28 win against the Friars on Friday night.

As a sophomore, Uiagalelei stands at 6-foot-5 and weighs 260 pounds. Last week, he had a pick-six in a win against Santa Margarita and on Friday he caught two touchdowns on offense.

Uiagalelei’s first TD came on a 26-yard strike from junior quarterback Katin Houser, which put the Braves ahead 10-7 with 10:06 left in the third quarter. After a lackluster first half offensively, that score to open the second half set the tone for the Braves.

The second Uiagalelei TD came in the fourth quarter on a 4th down jump-ball throw from sophomore quarterback Pierce Clarkson. That TD made the score 31-21 and proved to be the game-winner.

“That’s my mentality the whole game: put me on the outside and throw it up, I’m gonna go get it,” Uiagalelei said.

The jury is still out on where Uiagalelei will primarily play in college, but if he continues to look this dominant at tight end it would be tough to argue against him lining up there at the next level.

The Friars led 7-3 at halftime and played great defense in the first half. But an injury to sophomore linebacker Kitione “Tuna” Talavou meant Servite coach Troy Thomas had to change his game plan defensively and the Friars were never the same in the second half.

“When Tuna went down it changed our defense and I had to move guys around,” Thomas said. “We tried to do something different and then we tried to do what we were doing in the first half and that didn’t work as well because we didn’t have the personnel so that was tough.”

Servite scored three touchdowns in the second half and even though the Noah Fifita to Tetairoa McMillan connection heated up (all of McMillan’s receptions came in the second half, including a 64-yard bomb and 3-yard TD catch), the Friars couldn’t slow down St. John Bosco’s offense enough to win.

“No excuses,” Thomas said. “I think our kids played really hard and Bosco made some nice adjustments.”

Against Sierra Canyon, it was Rayshon Luke who had the big night. On Friday, junior tailback Jabari Bates stole the show. He finished the game with 172 yards on the ground including a 76-yard TD, which put St. John Bosco ahead 24-14 late in the third quarter.

“It’s really fun competing with these guys,” Bates said after the game. “We get better every day going against each other in the weight room and on the field. We’re like brothers.”

Junior running back Michael Hayes scored St. John Bosco’s final touchdown of the night. Hayes, Bates and Luke make up arguably the best backfield in California and one of the best in the country.