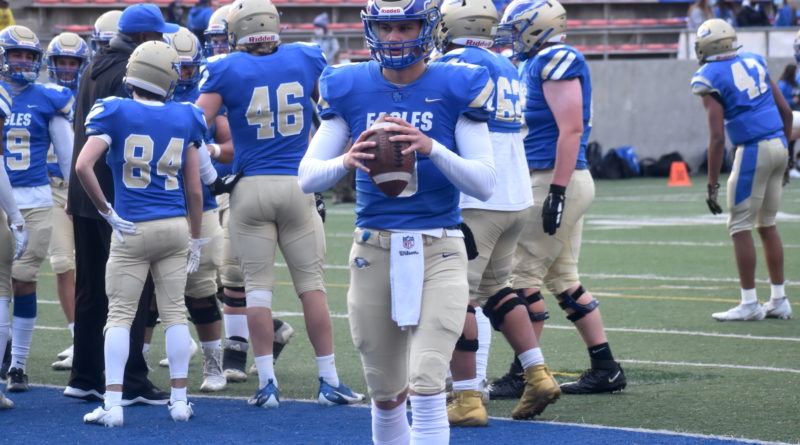 SANTA ANA– Colt Fulton threw for four touchdowns and over 400 yards on Thursday, and Santa Margarita put on a defensive clinic in a 42-0 domination of JSerra at Santa Ana Stadium. The Eagles moved to 2-1 on the season and 1-1 in league play.

It’s official: Santa Margarita is a factor in the Trinity League again, having now snapped its league play losing streak that dated back to 2017 in the toughest league in the country.

Any Trinity League victory is huge, but in addition to snapping the losing streak, it’s simply clear that Santa Margarita is done rebuilding. It’s a tough break that the senior-heavy Eagles have a major year of contention coinciding with a one-off year of shortened preseason and no playoffs. But this program has once again found its footing to tackle perennially enormous expectations. So even when this loaded senior class is gone, there likely won’t be a sense of having to start from scratch in order to remain competitive in the Trinity League for new head coach Anthony Rouzier and a litany of talented juniors and sophomores.

Also, if the postseason had not been canceled this season, this team would officially be a major threat to make a Division 1 playoff berth or go on a Division 2 championship run. It is the best SM squad in years.

Santa Margarita’s first couple of touchdown drives took a little time to pan out, but once the passing game was in rhythm, the Eagles’ offense shifted from steadily clearing first downs to exploding down the field via the passing game. SM led 21-0 less than two minutes into the second quarter with JSerra’s offense dead in the water. By that point, the Eagles were in complete control of the game.

It’s only been three games, but so far, numerous Eagles are having some of the better breakout campaigns in the Southern Section. And the same new faces continued dominating in this one.

Colt Fulton was already a bona fide 3-star prospect and impact player starting at QB for Santa Margarita last season, but through three games he’s already fairly close to surpassing his entire 2019 passing yardage. He’s at nearly 1,000 yards with a passer rating of 119.6 so far after putting up 1,361 as a junior, and has already nearly doubled his passing touchdown total of seven with 13 this season. Fulton threw for 403 yards on Thursday to lead an explosive offensive effort from the get-go.

His two main targets were Reymello Murphy (106 yards, three touchdowns) and Michael Buckley (132 yards, one touchdown), both of whom are having breakout senior campaigns. Murphy, a 3-star prospect with interest from high-majors but no D-1 offers yet, has been turning heads since transferring down from Archbishop Mitty. He’s caught for over 100 yards in all three games this season and leads the team with 350 yards and six TDs receiving.

Three-star junior DT Hero Kanu, playing his first season since coming over from Germany, has picked up 10 Power-5 offers in the past two weeks. (Yes, you read that correctly.) And he was a force against JSerra, leading a vicious defensive effort that went 11 men deep but started up front, alongside another new face from Germany, future UW Husky Maurice Heims at DE.

Despite having one of the better offensive lines in California, JSerra wasn’t able to get anything going all night, and struggled quite a bit to move the ball. On offense, SM’s main producers made play after play in the air supplemented by a running game that kept the Lions’ defense honest and a strong effort from the O-line.

Ian Grogan and Hussein Santillan both ran for touchdowns for the Eagles.

BEST DEFENSIVE LINE IN THE STATE?

With Kanu breaking out at a remarkable level, Heims making a big impact, and SBLive First Team All-State DE Derek Wilkins back for his senior year, Santa Margarita’s defensive line truly may be the best in California.

Joining those three national recruits up front is senior Matthew Auriemma, who had seven tackles last week against St. John Bosco and was a force against JSerra as well. That front four stuffs the run quite well and is even better at pass rushing. When the season ends, SM’s D-line might be among the state’s leaders in sacks and/or tackles for loss despite facing a Trinity League schedule.

It’s no secret that this is a rebuilding year for JSerra, a squad that is almost always among the Southern Section’s elites but returns almost no top players from 2019. It also has to be very challenging for a team to see exactly what it has in terms of young, up-and-coming talent having to dive straight into Trinity League play with no non-league games.

That means JSerra seems poised to ride this season out in the Trinity League basement, and that likely won’t relent until the season is over. But it’s no accident that the Lions are ranked in the top couple hundred in the country every single season. Pat Harlow and co. know how to build a powerhouse, and count on them doing so again very soon. Especially with a promising young quarterback in sophomore Jaxon Potter with enough upside to build around going forward.