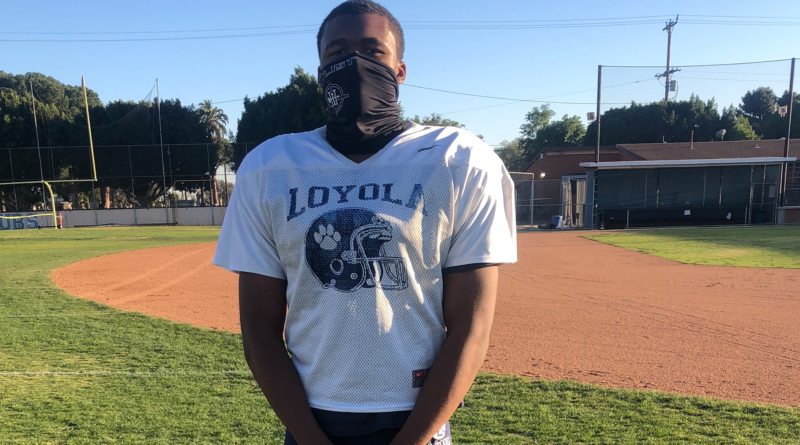 It’s tougher now to land a Division I college football scholarship coming out of high school than ever before.

There are two primary reasons fewer seniors signed this cycle: the COVID-19 pandemic and schools recruiting the transfer portal harder than ever before.

Seniors in California were hit especially hard by the pandemic because the high school football season was moved from the fall to the spring, eliminating any chance of seniors receiving an offer based on tape from their final high school season. But that wasn’t the only contributing factor to fewer California seniors signing with FBS teams, according to 247Sports National Recruiting Analyst Greg Biggins.

Players who were borderline FBS recruits as juniors never got to show college coaches that they made the jump from a questionable prospect to a sure thing.

“Josh would be a Division I signee if we weren’t in this pandemic,” Loyola head coach Drew Casani said.

Long’s 247Sports.com recruiting page looks like any other Division I kid. It shows scholarship offers from Arizona State, Kansas, Nevada, New Mexico and UNLV. He’d developed relationships with coaches from some of those programs as a junior, but then the pandemic hit and today he’s still unsigned.

“A lot of things fell through for me,” Long said at a Loyola football practice earlier this month. “There were a lot of coaches that said they were going to come back in the summer but couldn’t due to COVID. It was basically like a chain reaction. That happened and then my recruitment slowed down and then it was just wait and see if the season comes back.”

And now that the season is back, it’s most likely too little too late for seniors like Long, although he remains optimistic.

“I’m hoping for a scholarship out of these four games,” he said. “I’m hoping an opportunity presents itself.”

This recruiting ripple effect isn’t only being felt by the class of 2021; 2022’s have to deal with it too.

FBS schools have 85 football scholarships and even though that number will go up this fall because the NCAA is allowing any player who wishes to use an extra year of eligibility to do so because of the pandemic, the 85 limit is expected to return in 2022. That crunch will force smaller 2022 recruiting classes, according to Biggins.

2022 recruits not only have to deal with the impending scholarship reduction, they’re also fighting off potential transfer portal additions.

Loyola junior running back Harrison Allen rushed for 867 yards and 13 touchdowns as a sophomore. One DI school really likes him, but they recently took a running back transfer and have two senior tailbacks who plan to use their extra year of eligibility to come back next year, which has currently squeezed Allen out of his first DI offer.

This is the new recruiting reality.

“Schools used to use the last four spots in a recruiting class for guys who had a chance or showed potential or flashes but you weren’t 100-percent sold on,” Biggins said. “Now schools fill those spots in the portal, especially with the rule coming that allows those kids to play right away. You can now get a guy with two or three years of college experience and he can play immediately versus a guy who is coming straight from high school who you aren’t sure about. Schools are going with the portal kid.”

It appears that the trend of fewer high school seniors signing with FBS schools is here to stay. Even though it will be tougher for them to land scholarships, at least the 2022 class in California will get an abbreviated junior season and then a full senior season to showcase themselves. Class of 2021 recruits in the state got the opposite of that and for many of them, it killed their dreams of signing out of high school.

“My heart hurts for the 2021’s who didn’t have an offer at all and didn’t have a chance to be seen at all,” Biggins said. “Thankfully there’s a season now, but the reality is we’ve already had both signing days.”

St. John Bosco safety Jordan Walker is one of the many California prospects who never formally received a Division I scholarship offer.

“It’s been really frustrating to see people that you know you’re better than sign and it’s like ‘man I used to play against that kid,’ but that’s just another road block and you can’t stop,” he said.

Walker hopes to use this spring to lock in “anything he can find” at the next level.

“Cole got screwed,” Sierra Canyon head coach Jon Ellinghouse told SBLive. “He really could have benefited from having a fall season.”

“As of now I’m just looking at schools to walk on at mainly in the Southern area because my family lives down in Mississippi,” he said. “I’m going to use these six games to show colleges that I can play at the next level.”

Even though Walker and Bullock never got the chance to commit to an FBS school early, for future recruits who are lucky enough to receive an offer in this ever-changing recruiting landscape, Biggins recommends committing early to lock in a spot.

“Offers aren’t committable forever,” he said. “A lot of them aren’t even committable the day they go out. A lot of times it’s offer now and evaluate later and if we like you later then we’ll honor that scholarship. Even the ones that are committable, when spots fill up, all of a sudden you go from having all of these options to maybe only having one and sometimes that one isn’t even there in the end.”

That’s what happened to Long. He had options, waited, and then it was too late.

“I never thought we wouldn’t have a fall season,” Long said. “I wasn’t even thinking about committing back then, but now if I was to redo it, I would have committed early to secure a scholarship.”