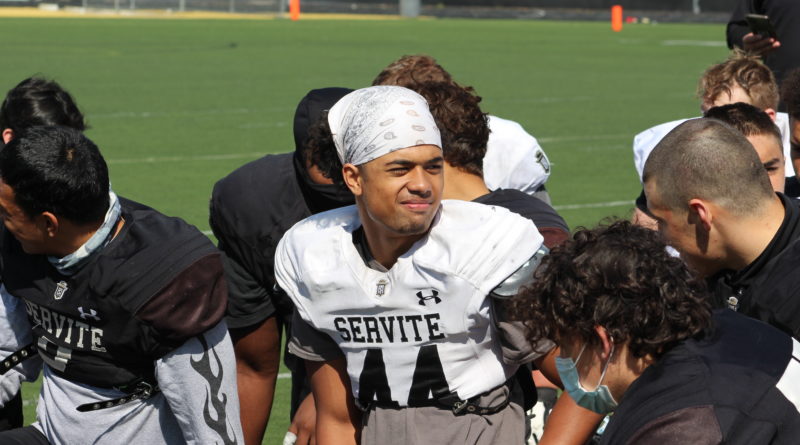 Southern California high school football fans get their second top-five matchup of the season on Friday when No. 1 St. John Bosco hosts No. 3 Servite.

Santa Margarita hung close with St. John Bosco in their game Saturday night, but eventually the Braves pulled away winning 65-28. Sophomore defensive end Matayo Uiagalelei had a pick-six in the game.

After falling to No. 1 St. John Bosco 42-21 in their opener, Sierra Canyon dominated St. Bernard on Friday winning 56-0.

Mission Viejo destroyed Oak Hills in their opener winning 55-6. Micah Carreon had a pick-six in the game.

Corona Centennial beat King in their first game of the spring season winning 50-0.

Alemany took down No. 20 Notre Dame 21-9 to open Mission League play. Sophomore safety RJ Jones had an interception he returned 65-yards for a TD in the win.

On the field, the Lancers will be very talented this spring, led by senior starting quarterback Mikey Zele and a scary group of linebackers (Isaac Garcia, Carson Cook, Cooper Robertson and Dez Diles). Senior running back Julien Stokes is another name to know.

Oaks Christian came out slow out of the gates on Friday, but rallied late to beat rival Westlake 30-16. Freshman receiver Bryce Farrell caught two touchdowns in the win.

Sophomore QB Malachi Nelson has looked like the real deal in Los Alamitos’ wins over Long Beach Millikan and Corona del Mar to open the season.

The Cubs turned what looked like a rebuilding season into a Division 4 finals run in 2019. Loyola returns numerous playmakers in 2021 including an elite corner tandem in Ceyair Wright (USC signee) and Zakhari Spears (Washington signee).

A positive COVID-19 test canceled Loyola’s opener against Upland. The Cubs hope to start their season this week against St. Bernard.

Santa Margarita hung tough with St. John Bosco in their Trinity League opener, but eventually fell 65-28. Senior quarterback Colt Fulton completed 23 of 40 passes for 268 yards, four TDs and an interception in the game.

Poly won a hard fought overtime showdown against No. 19 Gardena Serra two weeks ago thanks to a balanced rushing attack and good defense. They’ll now roll in the Moore League and that’s what happened Friday in their 41-0 win over Lakewood.

Edison rolled to a 55-7 win over Trabuco Hills in their season opener and kept up that momentum in a 47-14 win over Newport Harbor on Friday.

Vista Murrieta won a barn burner in their season opener taking down Chaparral 34-33 thanks to a clutch fourth down TD toss from Brady Jones.

Notre Dame fell in their season opener 21-9 to No. 7 Alemany. Micah McGavin caught a TD in the game for the Knights.

Murrieta Valley took down Heritage 48-14. Tiger Bachmeier caught a TD in the game.