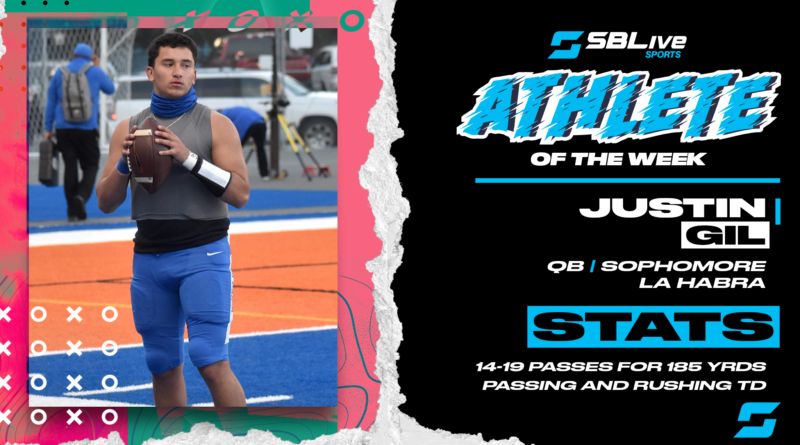 In Gil’s varsity debut, the sophomore completed 14-19 passes for 185 yards, and had both a passing and rushing touchdown. La Habra defeated reigning CIFSS Division 2 finalist Chaminade 35-16.

Gil received 42.05% of the vote, beating out Mira Costa WR Thomas Southey who finished second with 35.29%. Granite Hills RB Joaquin Thomas finished third with 10.11% and Helix RB Christian Washington finished fourth with 4.12%. There were over 30,000 votes tallied this week!

Katin Houser, St. John Bosco QB: In his debut as a Brave, Houser threw for two touchdowns in under three quarters of action.

Jack Kilpatrick, Cathedral Catholic RB: The senior running back caught three passes for 89 yards and was on the receiving end of two of Mirer’s three touchdown passes.

Dennis Andrew, Orange Glen QB: Andrew started his junior season with a bang, passing for 506 yards and seven touchdowns in the Patriot’s loss to Santa Fe Christian on Friday.

Christian Washington, Helix RB: Washington had 328 all-purpose yards, a receiving touchdown, and a kickoff return for a touchdown in the opening week loss to St. Augustine.

Trey Bradford, San Marcos DB: The Fordham-signee had six tackles and returned an interception for a touchdown in the Knight’s 9-7 loss to La Costa Canyon on Friday.

Justus McComb, Granite Hills QB: The Southwest Minnesota State-signee started his season strong with 118 passing yards and three touchdowns against Valhalla. He also added another touchdown on the ground.

Braeden Boyles, Edison QB: Boyles only attempted nine passes in a 55-7 blowout of Trabuco Hills, but he completed seven of them for four touchdowns.

Makai Lemon, Los Alamitos WR/DB: Lemon caught for 115 yards and a touchdown on offense, and had an interception on defense.

Vince Silva, Sunny Hills RB/LB: Silva ran for 174 yards and a touchdown, and finished with over 200 yards of offense. He also made four tackles.

Ethan Pocci, Yorba Linda RB: Yorba Linda came up just short in a 24-23 loss against Newport Harbor, but Pocci gave it all he could with 186 yards and two touchdowns rushing.

Casey Pavlik, Mira Costa QB: In his first ever varsity start, Pavlik completed 28 of 41 passes for 404 yards and five touchdowns.

Colt Fulton, Santa Margarita QB: Fulton completed 18-25 passes for 315 yards and five touchdowns as SM defeated Mayfair 54-16. He did so in under three quarters of action.