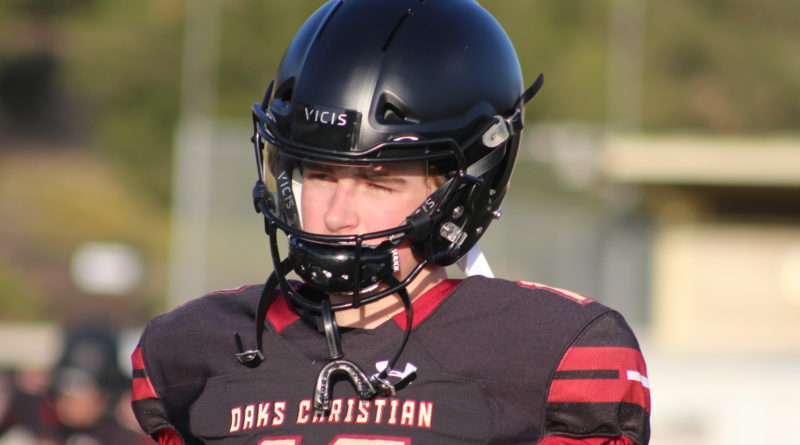 WESTLAKE VILLAGE — In a back and forth affair, Oaks Christian senior Carson Schwesinger did it all Friday night, leading the Lions to a 30-16 win over rival Westlake. Oaks Christian moved to 2-0 with the win and Westlake dropped to 0-1. Below are three takeaways.

SCHWESINGER HAS BIG NIGHT FOR LIONS

Schwesinger, a future UCLA walk-on, caught nine passes for 126 yards and a touchdown at tight end and also made a crucial second half interception for Oaks Christian.

“He’s big time,” Oaks Christian head coach Charlie Collins said after the game. “He’s our guy and that’s what we expect out of him. He’s our leader and he’s doing what I expect him to do.”

Schwesinger transferred from Santa Clarita Christian in the offseason. He intercepted two passes in Oaks Christian’s first game of the season against Paraclete, a 37-14 win.

The senior is certainly making the most of the spring season so far.

Outside of Schwesinger, Oaks Christian junior QB Cole Tannenbaum and freshman receiver Chase Farrell were the other two top performers for the Lions. Tannenbaum threw for 391 yards and three touchdowns. He hit Farrell on touchdown passes of 35 and 40 yards in the second half, which helped Oaks pull away after a tight first three quarters. The game was tied 10-10 at halftime and Oaks led 17-16 heading into the fourth.

Collins didn’t hold back when describing his team’s lack of focus on Saturday.

“Unfortunately you hate to say it, but we were looking past this game and thinking about Sierra Canyon,” he said. “There’s a lesson in it. Looking too far ahead and then you have four turnovers and what not, you make it a closer game. In spite of all that we still managed to come back and wake up and win. We’ll make a lot of corrections, come back next weekend and we’ll be ready to roll.”

WESTLAKE LOOKS SET UP FOR SUCCESS

Despite being inexperienced, Westlake battled and maybe even could have walked away with a win if a break or two had gone their way on Saturday. The main missed opportunity the Warriors will roll their eyes at in the film room came in the second quarter when they turned the ball over on downs on fourth and goal from the one yard-line.

“We left some opportunities on the board,” Westlake head coach Tim Kirksey said. “…But I think my guys played exceptionally well for only having 14 days of real practice coming into our first game.”

“The expectation is it doesn’t matter how young you are or who’s the next guy up from an opportunity standpoint, we feel like we can play with anybody and we showed that tonight,” Kirksey said.