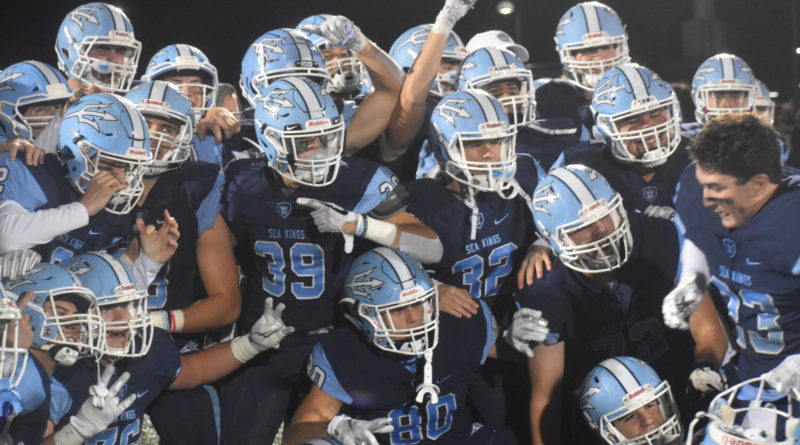 While many Southern California high school football teams have not yet played an official game, Week 1 of the 2021 spring football season did not disappoint. With almost every team now set to play – including many potential league championship matchups – Week 2 is guaranteed to be even better.

Picking just 10 games was a tough task in a week with so many must-see matchups, but here are the Top 10 games to watch this week in Southern California high school football.

Two of Ventura County’s best go at it on Saturday in a game that could decide the Marmonte League. Coming off a 37-14 statement win over Paraclete and having won this game 35-14 last season, Oaks Christian has a clear edge here.

The Lions are overflowing with young talent, with too many impact players to name. Cole Tannenbaum, who got significant action playing behind Jameson Wang, looked good in his debut as Oaks’ QB1, and RB Semaj Freeman was dominant with 134 yards and three touchdowns. DE Sterling Lane absolutely erupted for six tackles, five tackles for loss, four sacks, and three QB-hurries. WR/DB Carson Schwesinger was also outstanding with 46 yards and a touchdown receiving, two interceptions, and a forced fumble.

But Westlake will be ready for battle, and features a horde of talent including DT Victory Vaka, WR Ja’Seem Reed, and RB Dane Reed. This match also features the Westlake debut of former Oxnard 3-star QB Jaden Jones. Don’t be surprised if the underdog Warriors make this a real contest.

Chaparral was the surprise X-factor in the Southwestern League last season, and this year the Pumas are aiming for the crown. They are deep with returners on both sides of the ball, and major size up front. Elia Migao was one of the best O-linemen in the section last season, and their offense also includes one of SoCal’s better RB tandems in Hunter Roddy and Matthew Majel. Chap also has a scary defensive line including Enoka Migao, Tristen Ramirez, and Chris Morales.

Still, despite the loss of 4-star TE Jack Pedersen, Vista Murrieta has the size and talent to match up. DL Landon Gallagher and LB Marcus Nguyen lead a strong front seven, and Jack D’Ambra is the anchor of the OL. Brady Jones will be under center for the Broncos after coming on strong last season, and has a new target in Linfield Christian transfer Jalani Jefferson, who’ll not only play WR but lead an athletic secondary alongside Jordan Little. This one is up for grabs with a lot on the line.

Speaking of extremely competitive leagues, the Avocado League has multiple must-see battles this week including Mission Hills at Oceanside. Oceanside, led by one of the state’s best RBs in Kavika Tua, seeks to start the season off right and avenge last season’s 27-0 loss. Mission Hills nearly won the league last year, but came up just short in their league play opener losing 17-7 against Carlsbad. The Grizzlies are not looking to settle for second place, and have to be ready for a battle in their season debut to take home the title this time around.

Staying in the San Diego Section, reigning section champ Helix is looking to bounce back after dropping their season opener against St. Augustine. Christian Washington ran for 145 yards but the Highlanders only got 13 points on the board. After a solid but not spectacular 7-5 2019 season, Mater Dei Catholic is poised for a huge season, returning nearly all its top players. That includes 3-star QB Trevor Appelman, most of its 2019 receiving corps, SS Michael Herrington, and the top ILB in the Class of 2023, Tre Edwards. Helix still has the edge here, but this could also turn into a massive statement win for a Crusaders program on the rise.

After coming up just short against St. Francis in a 38-35 thriller, Mira Costa welcomes Culver City to the Bay League for the Centaurs’ season opener. Casey Pavlik threw for five touchdowns and over 400 yards in his varsity debut last game, and has a big-time WR1 to throw to in Thomas Southey. So if you like aerial battles, this one is for you – Culver City QB Zevi Eckhaus threw for 4,456 yards and 59 touchdowns last season on a ridiculous passer rating of 142.9, and he has 3-star receivers Emari Pait and Legend Waring waiting for him in the end zone.

Two perennial Mission League contenders dive right into the title race at 5 p.m. on Friday. Alemany, which some consider the top favorite to win the league, will debut JR. Dylan Gebbia as its new QB1, and he has an established star to pass to in Kevin Green Jr with SB JD Sumlin now a Warrior after transferring in from Sierra Canyon. Alemany also has the top RB and LB in the Mission League in Floyd Chalk and Niuafe Tuihalamaka, respectively. The biggest storyline for Notre Dame revolves around their top player, QB Cooper Meek, who missed essentially all of last season with an injury. He’s a 3-star recruit who proved himself as a clear D-1 talent with a strong sophomore campaign in 2018, but has a steep hill to climb with a young, inexperienced group around him if the Knights want to contend for a league championship.

The battle for High Desert supremacy and the Mojave River League will almost certainly be decided right off the bat in these teams’ season openers. Serrano won this 17-7 last season, but returns very little of its 2019 core, with WR/DB JJ Rider as the key returner. Apple Valley is the favorite this time, featuring the beastly QB/WR tandem of 4-star signal caller Jayden Denegal and Sacramento State commit Tyron Smith. Also returning for the Sun Devils are senior CB Marquis Cato and one of the section’s top breakout lineman candidates, sophomore OT Raymond Pulido.

While Servite is the clear favorite to pull out a W in the first week of Trinity League play, this is a can’t-miss matchup. The Friars were dominant in a 42-6 win over Damien last week and feature the country’s top QB/WR/TE trio in the Class of 2022 – or maybe in all of high school football – in Noah Fifita, Tetairoa McMillan, and Keyan Burnett. CB Noah Avinger and LB Jacob Manu lead a stacked defense, and Servite really has big-name players at nearly every position on both ends.

But OLu is also loaded with too much talent to name, and is even bigger up front than Servite. OT Jason White leads one of the biggest offensive lines in all of high school football, and Jason Terry has transferred in to fill some big shoes at RB. With QB Logan Gonzalez and WRs Malik Blackmon, Nick Gallegos, and Desmin Jackson (also an RB) returning, the Lancers are guaranteed to have a better passing game than last season. They also just might have enough in the secondary to slow down Servite’s aerial attack, with Bryce Phillips and Noah Chase leading the way.

Reigning CIFSS Division 2 champ Sierra Canyon is sure to be fired up coming off a reasonable but disappointing loss at St. John Bosco, and St. Bernard is set to debut an absolute horde of new talent. Get your popcorn.

It needs to be said twice: get your popcorn.

Los Al has an elite passing game running the show, led by 4-star sophomores QB Malachi Nelson and WR Makai Lemon. The Griffins are coming off a 59-0 blowout win over Milliken and are ready for their first chance to really step into the limelight. They’ll have to go through a talented core of upperclassmen with a true championship pedigree to do it this week.

In any given week of Southern California high school football, there are dozens of great games to watch between top programs. Here are some other exciting matchups happening this week: