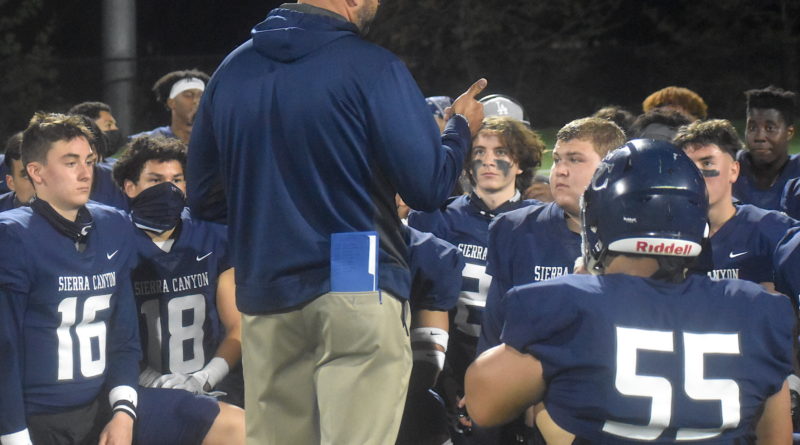 CHATSWORTH– After dropping its season opener 42-21 last week at St. John Bosco, Sierra Canyon came ready to play in every way at home against St. Bernard on Friday. The Trailblazers got off to a fast start, leading 21-0 after the first quarter, and only kept adding onto it. Here are three takeaways from the game:

SIERRA CANYON FIRES ON ALL CYLINDERS

The Trailblazers’ received strong contributions from so many players that it’s hard to even find a place to start in singling out standout individuals.

The defense set the tone, routinely creating turnovers and/or landing the offense such good field position that it barely had to move the ball to score. The front seven, led by DE Ezekiel Larry and LB Drue Watts, did a very solid job pressuring St. Bernard QBs Jackson Dadich and Darius Curry, and an even better job stuffing the run with high 3-star RB Jaylen Thompson coming at them. Sierra Canyon’s secondary was even more dominant, only allowing 124 yards in the air, some of which came in garbage time, and nearly intercepting numerous passes that got broken up.

Watts got a pick-six, Ezekiel Larry recovered a fumble, and CB Elias Larry, one of the stars of the secondary, also recorded a fumble recovery.

“Last week we were really disappointed with our ability to do the little things that are not necessarily in between the lines. Getting plays in, substituting… having only two weeks to practice, it was hard to do that. So we’ve been harping on our guys all week long to be able to execute… we did a better job at executing at a higher level.”

Everyone got in on the action offensively for Sierra Canyon. QB Daniel Duran completed 11 of 16 passes for 135 yards and two touchdowns to Donovan Williams and DJ Harvey. Anthony Spearman and Khalil Peart both had first-half rushing touchdowns, and Jason Jones Jr. had one in each half.

Even K/P Josh Bryan was on top of his game, going 7-7 on PATs and drilling numerous kickoffs into the vicinity of the crossbar.

This game started with a Sierra Canyon three-and-out, and looked like it might be a low-scoring defensive battle. Then the Trailblazers turned on the jets offensively while allowing only a couple first downs total in the first 1.5 quarters. It took them a little over five minutes to get on the board with a pass from Duran to Williams, and nearly 10 minutes to make it 14-0 on a Peart power run.

At that point it still appeared to be a game, but the Trailblazers got the ball back less than a minute later with great field position, and Jones ran it home to make it 21-0 with a minute remaining in the first quarter. Even though St. Bernard then played its best stretch of ball for the rest of the first half, in which it only allowed one more score until halftime, the deficit was already too large.

While this was by all accounts an ugly loss for the Vikings, it would be an understatement to say not all hope is lost. They were going up against the reigning Southern Section Division 2 champion and CIF 1-AA state finalist, a Sierra Canyon team with a lot of continuity and a game against the reigning national champion already under its belt this season. Meanwhile, St. Bernard has an almost entirely new roster from last season, and this was its first game, on the road no less.

That’s not to make excuses for an extremely talented squad that was not up to the challenge against a better team, but the St. Bernard sideline seemed to understand the context of the situation, and didn’t implode the way talented teams with major ambitions often do in blowout losses. The message from the coaching staff was for the players to keep their heads up and stay calm, and while the score only got more lopsided, there wasn’t a sense of panic.

Additionally, while it won’t reflect in the stat sheet, freshman QB Darius Curry showed why he already had seven college from primarily Power-5 schools before ever playing a snap of high school ball. His poise, ability to extend plays with his legs, and passing accuracy were off the charts relative to his age in a very difficult situation, and he completed nine of 13 passes. Curry is also the Vikings’ punter, and after a couple mediocre punts to start the game, his last few were very strong. He officially “got next” as part of a St. Bernard program with a very bright future.

“And I’ll tell you what, I don’t think anybody’s going to want to see that team in a couple years. They’re young and talented and well-coached, so we’ve got a lot of respect for them.”