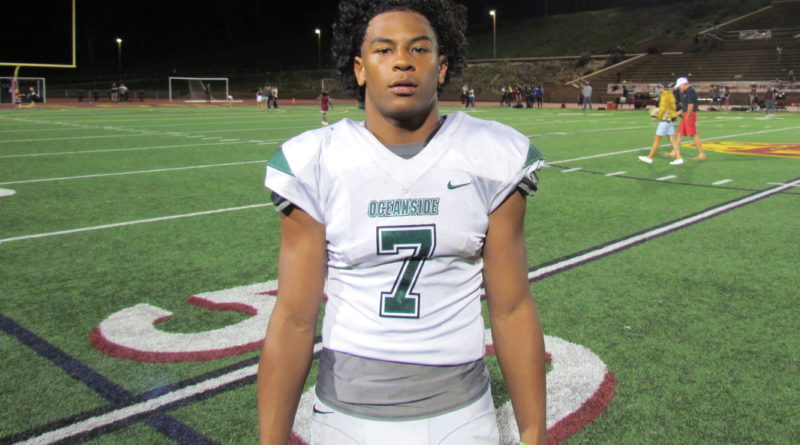 With the spring 2021 football season underway across most of the state, SBLive California continues to take a look at the top high school football players in each section, position by position.

The San Diego Section is loaded with running back talent again, starting with Oceanside’s Kavika Tua. Here’s a look at the Top 20 backs in the CIFSDS.

Note: The main criteria for our running back rankings are statistics from the 2019 high school season relative to team success (on offense). The rankings were compiled by SBLive reporter Bodie DeSilva.

Norwood was off to a strong start during his junior season, rushing for over 500 yards and five touchdowns in five games before a season ending injury. He should be a key piece of the Lancers offense in the 2021 spring season.

Like many of San Diego’s top running backs, Britton had his 2019 campaign end early due to injury. He was coming off of a 310-yard, five touchdown performance against La Jolla Country Day when he last played. With the Eagles pounding the rock, expect Britton to have a big 2021 season.

Stevenson has averaged over six yards per carry in each of his last two seasons and is closing in on 1,000 rushing yards for his career. He signed with Southwest Minnesota State in February.

Jackson broke out as a sophomore with over 1,100 yards and was well on his way as a junior before an injury shut him down after six games. He’ll look to get back to his old ways as he closes out his senior year.

Nealy has been limited to only 12 games over the past two seasons but has averaged over ten yards per carry and has 12 rushing touchdowns during that time. He transfers from Steele Canyon to Lincoln for his senior year to give the Hornets another weapon on offense.

Devoux has flown under the radar during his first three seasons for the Vikings but certainly hasn’t lacked for production. He’s carried for over 3,700 yards and has 57 rushing touchdowns during that time and should have the opportunity to make a move on the section’s career rushing list this season.

Sega carried for 971 yards last season, averaging over eight yards per carry as he helped the Wildcats to the CIF Division 2 Championship and is also one of the better linebackers in the section.

Lingao formed an excellent running back tandem with Dustan Ellison throughout the season and on their way to capturing the CIF Division 4 Championship. He averaged over nine yards per carry last season and scored 12 rushing touchdowns. Lingao is committed to The University of Redlands.

Mageo’s move over to Oceanside following two seasons at Tri-City Christian gives the Pirates an excellent one-two punch with him and senior Kavika Tua. Mageo eclipsed the 1,000-yard mark last season for the Eagles and finished with 17 rushing touchdowns.

Hernandez averaged just under 11 yards per carry as a junior and missed out on additional yards when the Trojans were blowing out their opponents. He saved the best for last, rushing for 212 yards and three touchdowns against Francis Parker in the CIF Championship Game.

Hall averaged over ten yards per carry and had four rushing touchdowns in backup duty for the Dons last season and should form one of the county’s best duos alongside Lucky Sutton.

Sutton only had 32 carries during the 2019 season but impressed enough to pick up offers from four Mountain West schools including San Diego State. He’s a top breakout candidate for the 2021 Spring season.

Hicks is closing in on 2,000 rushing yards for his career as he enters his last season for the Tigers and has shown off his ability on defense the past two seasons with 111 tackles, four sacks, six forced fumbles, and three interceptions.

Ellison has posted back-to-back 1,000-yard rushing seasons for Canyon Hills despite exiting early several times when his team had a big lead. He’s scored 39 rushing touchdowns the past two seasons and should once again be one of San Diego’s top weapons on the ground.

Washington stepped in for the injured Elelyon Noa midway through the 2019 season and looks to be the next great running back for the Highlanders. He ran for 1,110 yards while averaging eight yards per carry and scored 15 touchdowns on the ground.

Estrada was held out of the end zone only once last season on his way to 1,306 rushing yards for the Kearny Komets. He’ll play his senior season at Mater Dei Catholic and has signed with Idaho.

Gardinera had a streak of 11 straight 100-yard rushing games as he helped the Falcons to a 12-1 record and a berth in the CIF Division 3 Championship Game. He nearly doubled his yardage from his sophomore to junior season, finishing with 1,783 yards and 24 touchdowns.

Tucker enters the season as San Diego’s top all-purpose running back after posting huge numbers in 2019. He rushed for over 1,000 yards while averaging over nine yards per carry and caught 50 passes for 905 yards, finishing the season with 20 total touchdowns. He’s signed with Cornell.

Cardwell ran for just under 2,000 yards and had 34 rushing touchdowns during the past two seasons at St. Augustine. He’s transferred over to Morse for his senior season and signed with Oregon in February.

Tua had a huge junior season, rushing for over 2,100 yards while averaging just under nine yards per carry. He scored 21 touchdowns on the ground and caught 27 passes and two more touchdowns. Offers have come in from San Jose State, South Dakota, and Sacramento State.

There were several running backs in the conversation for our Top 20 who narrowly missed the cut. Here they are: