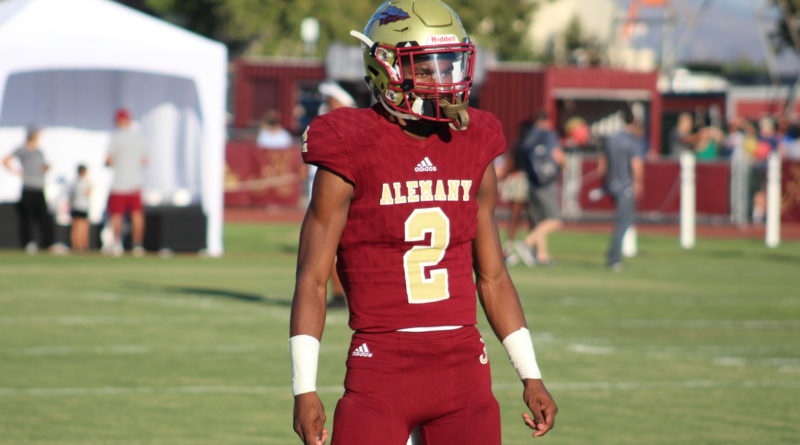 Ahead of league play beginning across the state, SBLive is previewing some of the top high school football leagues in California.

Here’s everything you need to know about the Mission League, which starts league play on Friday. The Mission League is comprised of Alemany, Bishop Amat, Cathedral, Chaminade, Notre Dame and Gardena Serra.

Bishop Amat has won the Mission League for two straight years, posting perfect 5-0 records in both 2018 and 2019. Junior quarterback Tobin O’Dell returns for the Lancers this season after throwing for ten touchdowns as a sophomore. He’s the main playmaker for Bishop Amat this spring following the graduation of running back Damien Moore, last year’s Mission League Player of the Year.

On paper, the Lancers don’t have the same level of talent as they’ve had in years past, especially with would-be senior Dyson McCutcheon, a University of Washington defensive back signee, opting out of the spring season. But other Mission League teams know not to overlook Steve Hagerty coached teams. The Lancers will still be a formidable foe this spring. Senior defensive lineman Martin Rodriguez and senior linebacker Ryan Talamantes will anchor Amat’s defense. On offense, senior tight end Donavan Clinton will make life easier for O’Dell as a pass catcher and run blocker.

BIGGEST QUESTION FOR BISHOP AMAT: Is there enough talent on offense to three-peat?

Who will emerge as the team’s top pass catcher? Who replaces Moore in the backfield? These are the main questions facing Bishop Amat heading into league play.

It’s been an ugly start to the spring season for Chaminade. 2021 quarterback Jaylen Henderson opted out of the season, the Eagles had three turnovers on special teams in a scrimmage against Paraclete and they lost their opener to La Habra 35-16. Chaminade has talent, but early season returns indicate that this will be a rebuilding year for the Eagles who are rotating two sophomore quarterbacks, Indiana Wijay and Jacob Macias.

Chaminade does have a history in recent years of starting slow and finishing strong though. They went 0-2 in 2019 before advancing to the Division 2 Southern Section championship game, so don’t rule out a potential late season push.

BIGGEST QUESTION FOR CHAMINADE: Will the Eagles find their quarterback and other underclassmen who will help this fall?

Chaminade will get better as the season goes on and will certainly be competitive in the Mission League — Alemany seems like the only team clearly ahead of the Eagles right now, so don’t expect Chaminade to be routinely blown out. But don’t anticipate them pushing for a league title.

“We’re just happy to get back out there,” head coach Ed Croson said after the Paraclete scrimmage. “We’re way behind where we normally are in a season.”

The Eagles are young and this abbreviated season should reveal a lot about their future.

Even with a new quarterback, Alemany has enough talent to win the Mission League this spring. In fact, they should win it even though they lost four seniors to early graduation/spring opt outs. 2022 quarterback Dylan Gebbia has been named the starter for Alemany following Miller Moss’ decision to graduate early and enroll at USC. He’s not the only loss for the Warriors who will also be without Campbell McHarg (OL, Cal Poly signee), Myles Williams (DE, Cal signee) and Jaylin Smith (DB, USC signee). They are still enrolled at Alemany, but have opted out of the season.

BIGGEST QUESTION FOR ALEMANY: Can the Warriors get good enough quarterback play to run the table? Going 5-0 is definitely on the table for Alemany. If Gebbia has a big spring, it would be a surprise if the Warriors didn’t win out.

New Notre Dame head coach Joe McNab was former head man Kevin Rooney’s defensive coordinator for 39 years, so not much will change for the Knights this spring in terms of style of play. Notre Dame returns their starting QB Cooper Meek who missed almost all of last season with an injury, but the team is inexperienced overall.

“We’re young this year but we’re tight,” Meek told SBLive. “I feel like the Mission League is pretty open this year and we’re excited to get after it. We have a lot of guys that really just want to play.”

Notre Dame scrimmaged Loyola on Saturday and looked a little rusty, according to McNab, which means they’ll potentially have their hands full in their season opener against Alemany on Friday. But that is the only game Notre Dame will be surefire underdogs in this spring.

BIGGEST QUESTION FOR NOTRE DAME: We know the Knights will be fairly young, but can some of the seniors step up and push Notre Dame to a second place league finish?

Serra opened its season with a 27-21 overtime loss to Long Beach Poly last weekend. The Cavaliers really struggled on offense in the first half of the game and had trouble stopping the run.

2022 Serra QB Maalik Murphy is committed to Texas. He’s the team’s x-factor this spring. Murphy is capable of making consistent game-winning plays, he just lacks varsity experience. The Long Beach Poly game was his first ever varsity start. This spring season will be crucial for his development and how much he improves will directly correlate to how many games Serra wins in the league.

Even though they struggled in the run game against Poly, Serra’s defense is solid. Senior linebacker Lando Brown is one of the most underrated players in California and he forms a strong partnership with fellow senior linebacker Tyray O’dell.

BIGGEST QUESTION FOR GARDENA SERRA: Will the Cavaliers’ offensive line give Murphy enough time to make plays? That was one of the main issues Serra had against Poly. The Cavaliers also struggled to run the ball in the game. Getting improved offensive line play will help in both areas — that’s the key for Serra. Their defense is solid and certainly good enough to win Mission League games. The offensive line is Serra’s x-factor.

Cathedral lost last year’s QB Lucas Lenhoff and multiple receivers for this season because they transferred to play in North Carolina. Those losses make what was already going to be a very tough season for the Mission League’s newest team even tougher. In their season opener, Cathedral lost to Downey 24-0.

“We’re trying to get our kids some experience so we can battle next year,” Cathedral head coach Anthony Jefferson told SBLive.

BIGGEST QUESTION FOR CATHEDRAL: Can their defensive line cause problems in the Mission League?

The Phantoms are in a rebuilding year, but Jefferson says his defensive line is the strength of the team. That unit will be the most likely to make something happen for Cathedral this spring.