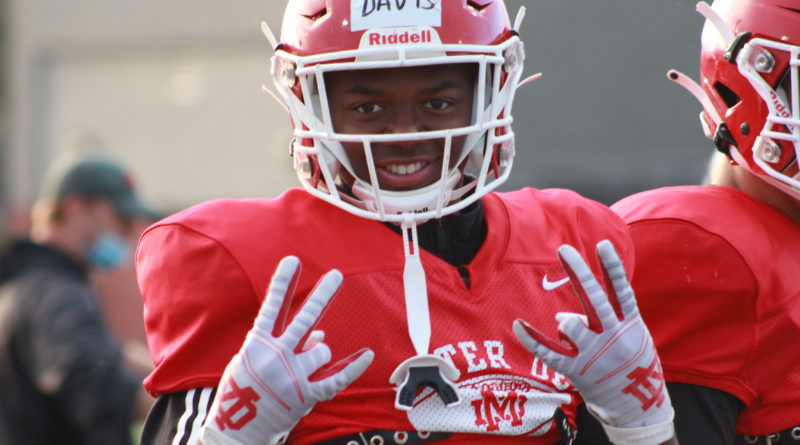 Top-ranked St. John Bosco was impressive in it season-opening win over Sierra Canyon – now we get to see what No. 2 Mater Dei looks like. The Monarchs open their 2021 season against No. 20 JSerra on Friday.

Mater Dei is in a similar position to St. John Bosco heading into their 2021 spring opener against No. 20 JSerra: they have to replace their legendary quarterback from 2019 as well now that Bryce Young is at Alabama. Junior Emmett Brown, sophomore Parker Awad and freshman Elijah Brown are all competing at the QB spot. The Monarchs will run the ball more this spring with Marceese Yetts and stud junior Raleek Brown. Head coach Bruce Rollinson is very excited about Brown, an Oklahoma commit.

Servite dominated Damien in their season opener, winning 42-6. The Friars have the best passing attack in California led by 2022 QB Noah Fifita.

Mission Viejo was supposed to play La Habra last week but the game was canceled due to a positive COVID-19 test in the Diablo program. Below is last week’s ranking rationale for Mission Viejo who has been cleared to play this week against Trabuco Hills:

Sierra Canyon fell to No. 1 St. John Bosco 42-21 in their opener, but showed enough promise to move to No. 5. DJ Harvey caught a TD in the game and made plays on defense as well as special teams.

Senior Jake Retzlaff will start at quarterback when he’s healthy after splitting time under center a year ago and should have a huge season for Cen10, who begins its season Thursday against King. Retzlaff picked up an injury in club football and won’t be cleared to play in the Huskies opener, so sophomore QB’s Isreal Carter and Carson Conklin will play.

Last year’s starting quarterback Tobin O’Dell is back this spring for Bishop Amat. Returning the starting QB is a luxury only two of the previous seven teams listed have. Amat is 10-0 in the Mission League in the last two seasons. They’ll be at or near the top of the league once again in 2021.

Oaks Christian backed up head coach Charles Collins’ preseason thinking in their season opening 37-14 win over Paraclete: “I don’t want to jinx anything, but we’re going to be dangerous,” he told SBLive in December. “We’re definitely going to be explosive on offense in my opinion.”

Running back Semaj Freeman scored three TDs for the Lions on Saturday night.

The Cubs turned what looked like a rebuilding season into a Division 4 finals run in 2019. Loyola returns numerous playmakers in 2021 including an elite corner tandem in Ceyair Wright (USC signee) and Zakhari Spears (Washington signee). The Cubs impressed in their Saturday scrimmage against No. 19 Notre Dame, so they move up.

Starting quarterback Colt Fulton and star defensive lineman Derek Wilkins (Cal signee) are back for the Eagles who routed Mayfair 54-16 in their season opener. Santa Margarita will be in the running for most improved team this spring.

Poly won a hard fought overtime showdown against No. 23 Gardena Serra on Friday thanks to a balanced rushing attack and good defense.

La Habra blew out Chaminade in their season opener after their game against Mission Viejo was canceled. Sophomore quarterback Justin Gil turned heads.

Edison rolled to a 55-7 win over Trabuco Hills to enter this week’s rankings.

A few seniors and transfers will be missed this spring for Notre Dame along with legendary head coach Kevin Rooney who retired, but the Knights return their starting QB Cooper Meek who missed almost all of last season with an injury. New head coach Joe McNab was Rooney’s defensive coordinator for 39 years. He said his team looked a little rusty in their scrimmage against Loyola on Saturday. Notre Dame faces a stiff test in their opener against No. 7 Alemany on Thursday.

JSerra lost a handful of transfers and will be very inexperienced, but still talented. Offensive lineman Mason Murphy (USC signee) and linebacker Jaden Genova (Army commit) are the team’s top players. Sophomore quarterback Jaxon Potter should have a big year. The Lions open the season Friday against No. 2 Mater Dei.

While the Lancers are losing some key pieces such as running back Cooper Vander Hill and linebacker Jonah Laban, they should still be solid. Junior Logan Gonzalez will start at QB this spring. Orange Lutheran will play No. 3 Servite in their opener at St. John Bosco’s Panish Stadium.

Third year head coach Eric Peterson is high on starting QB Brady Jones, a junior. “He’s gonna be exceptional for us,” Peterson told SBLive. “We’re excited about him. He started games for us last year, so he’s proven he can win, and he can sling it.”

Serra Gardena struggled on offense in their opener against Long Beach Poly so they drop 13 spots this week.

Junior quarterback Tyler Voss has had an impressive offseason. 2022 wideout Zamondre Merriweather will be one of his top targets.