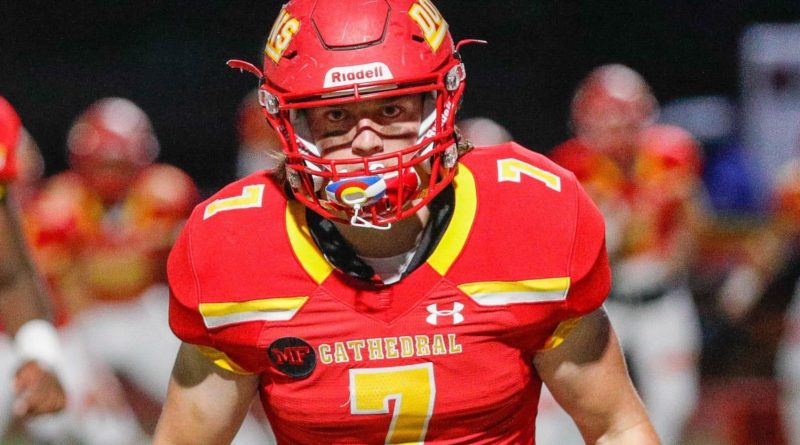 In the San Diego Section, Cathedral Catholic was impressive in its 41-0 shutout of Torrey Pines, and St. Augustine turned some heads with a 21-13 upset of Helix.

All of those games had an impact on this week’s statewide Top 25 rankings, which you can view below. The rankings were compiled by SBLive California reporter Connor Morrissette and will be released every Monday throughout the season.

Mater Dei is in a similar position to St. John Bosco heading into their 2021 spring opener against No. 20 JSerra: they have to replace their legendary quarterback from 2019 as well now that Bryce Young is at Alabama. Junior Emmett Brown, sophomore Parker Awad and freshman Elijah Brown are all competing at the QB spot. The Monarchs will run the ball more this spring with Marceese Yetts and stud junior Raleek Brown. Head coach Bruce Rollinson is very excited about Brown, an Oklahoma commit.

De La Salle survived somewhat of a scare to beat No. 24 St. Mary’s 35-27 and extend their Northern California winning streak to 311 games.

Servite dominated Damien in their season opener, winning 42-6. The Friars have the best passing attack in California led by 2022 QB Noah Fifita.

Mission Viejo was supposed to play La Habra last week but the game was canceled due to a positive COVID-19 test in the Diablo program. Below is last week’s ranking rationale for Mission Viejo who has been cleared to play this week against Trabuco Hills:

After starting six games under center a year ago due to Daylin McLemore (now at Arizona State) picking up an injury, junior Dominique Lampkin is ready for the spotlight this spring.

“Our identity is a tough, hardworking and dedicated team,” he told SBLive. “The thing that makes Serra football special is the brotherhood at our school. We work together as a team and go hard in everything we do.”

Serra opens its season this week on the road against No. 21 Valley Christian.

Sierra Canyon fell to No. 1 St. John Bosco 42-21 in their opener, but showed enough promise to move to No. 7. DJ Harvey caught a TD in the game and made plays on defense as well as special teams.

Senior Jake Retzlaff will start at quarterback when he’s healthy after splitting time under center a year ago and should have a huge season for Cen10, who begins its season Thursday against King. Retzlaff picked up an injury in club football and won’t be cleared to play in the Huskies opener, so sophomore QB’s Isreal Carter and Carson Conklin will play.

The Dons return six starters on offense and seven on defense. Those returners had a major impact in Cathedral Catholic’s 41-0 demolition of Torrey Pines over the weekend.

Just as Folsom head coach Paul Doherty predicted, Folsom was ready to play in their season opening 23-18 win over No. 25 Oak Ridge.

“When we get the chance to play, we’ll be ready to roll,” he told SBLive in December. “Credit to the kids and coaches.”

Junior quarterback Tyler Tremain impressed in his debut. He’s a player to watch this spring.

Last year’s starting quarterback Tobin O’Dell is back this spring for Bishop Amat. Returning the starting QB is a luxury not many of the top California high school football teams have in 2021. Amat is 10-0 in the Mission League in the last two seasons. They’ll be at or near the top of the league once again in 2021.

St. Augustine enters the rankings this week following their 21-13 upset win over Helix.

Oceanside will go as far as star running back Kavika Tua takes them. In 2019 as a junior, Tua finished the year with 2,832 all-purpose yards and 24 total touchdowns.

Oaks Christian backed up head coach Charles Collins’ preseason thinking in their season opening 37-14 win over Paraclete: “I don’t want to jinx anything, but we’re going to be dangerous,” he told SBLive in December. “We’re definitely going to be explosive on offense in my opinion.”

Running back Semaj Freeman scored three TDs for the Lions on Saturday night.

Central has a lot of turnover following 2019’s undefeated state championship run, but that doesn’t mean the Grizzlies will take a major step back.

“We’re young almost everywhere across the board,” Central head coach Kyle Biggs told SBLive. “I think our offensive line might be one of the best ones we’ve had at Central … We’re young but we’ve got guys. I wouldn’t say one position stands out more than the rest because there’s really question marks everywhere but as a whole, I’m really excited.”

Buchanan brings back six starters on each side of the ball. Expect senior wide receiver Darrien Gaines to have a big spring.

“Darrien is fast, versatile and can go up and high point the ball very well,” Buchanan head coach Matt Giordano told SBLive. “Once the ball is in his hands he is very dangerous. Everybody on defense will need to know where he is before the ball is snapped. He is arguably the best WR in our section.”

Veteren head coach Mike Machado wants to reward his seniors for their patience this spring.

“Things are going to be different than usual,” he told SBLive. “I think a big part of this season is about the seniors who worked in your program and put themselves in a position to maybe have been recruited by now. Get them some film. That’s what I’m concerned with.”

Senior running back Chase Laubach is a player to watch.

USC signee Prophet Brown, a running back and defensive back, is playing for Monterey Trail this spring. In 2019, he had 779 rushing yards, 11 rushing touchdowns, 343 receiving yards, five receiving touchdowns, and three interceptions.

Despite losing to De La Salle in their opener 35-27, St. Mary’s showed that they are a Top 25 team. Junior receiver Jadyn Marshall is one of the top wideouts in California.