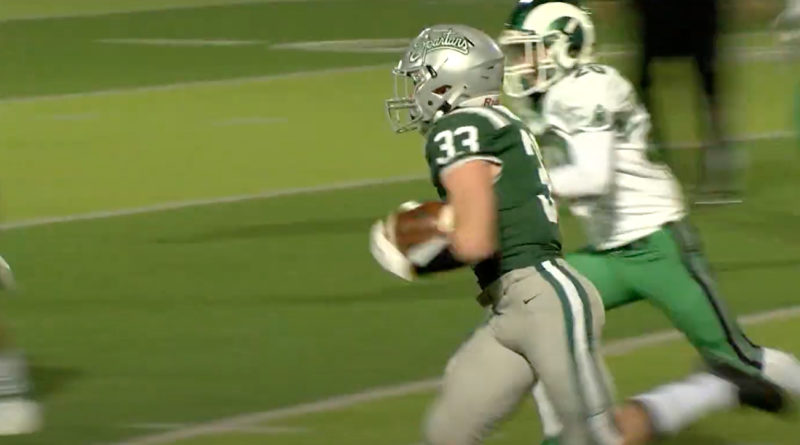 CONCORD – Traveling to Concord on a brisk Saturday night is not an unusual part of my 30 years of covering Bay Area high school sports.

This time of year I would normally be covering the end of the basketball season where De La Salle is typically part of the boys’ hoops playoff picture. But nothing about this high school sports year is normal.

On this Saturday night, in mid-March, the De La Salle football team was playing its first game of the season against Stockton power St. Mary’s. The game is part of a six game schedule for the Spartans, perennially one of the very best teams in the nation.

At 7 p.m. the bleachers at De La Salle were empty. The fans from the JV game were ushered out of the stadium so the two people allotted for each player could be allowed to come in and watch the varsity game.

This season there will be no playoffs, no state title hopes for either team. The best the Spartans can hope for is a league title based on regular season wins. Every game will be meaningful for other reasons.

Senior quarterback Dorian Hale was introduced with his parents as they walked through a green and white balloon tunnel entering the stadium to get their pictures taken on senior night. This tradition is usually held during the final home game of the season, but during a pandemic no one really knows when the last home game will be held.

With the stands only about 20 percent occupied, the game kicked off. De La Salle was sloppy from the start. The Spartans offense is based on lots of practice to get their timing down to a choreographed precision. But during a pandemic there is no practice as a team with lineman packed in tightly to run a complex offense.

Hale completed an early pass to impressive, 6-foot-4, 240 pound tight end and defensive tackle Brodie Tagaloa, who barreled over defenders for an 18-yard gain. But penalties and lack of execution hurt the Spartans in the first quarter and the drive stalled.

But late in the first quarter the Spartan offensive line worked its magic, opening a hole the size of a balloon tunnel for speedy back Nico Torrez who raced 60 yards for the first score of the game, making it 7-0 De La Salle.

This year’s St. Mary’s team is loaded with talent on both sides of the ball, including at quarterback where they alternate QBs each series. With Nathan Arnaudo behind center, he connected with speedy wideout Jaden Marshall on a 50-yard TD pass. The extra point failed and the Rams trailed 7-6.

The Rams quickly scored again, taking a 13-7 lead – which woke up the Spartans. De La Salle came into the game riding a 310-game winning streak against Northern California teams and they did not want to see that legendary streak end on Saturday. The Spartans responded, with Hale firing a dart to junior Bryant Meredith for a 34-yard touchdown and a 14-13 De La Salle lead.

From there, De La Salle’s defense took over. Lineman Chase Tofaeono recorded one of his two sacks in the game and Lu Hearns picked off a St. Mary’s pass to preserve the Spartans’ one-point halftime lead.

The second half was all De La Salle with Torrez notching another long TD run, this one good for 40 yards. Mekhi Norfleet then added a 40-yard TD run of his own, extending De La Salle’s lead to 28-13.

De La Salle controlled the game from there, allowing the second-team offense to come for a series late in the game. This shortened season is as much about letting the seniors have some fun as it is about winning games. In the end the Spartans took home a 35-27 win and extended their NorCal win streak to 311 games.

It was uncomfortable for longtime Spartan faithful used to racking up huge margins of victory on Northern California opponents.

But on this chili March evening, at a time when high school football is normally looking toward spring practice, this seemed like a huge victory in so many ways.

Be sure to check out 49ers Cal-Hi Sports Report presented by U.S. Bank, Sundays at 6 and 10 p.m. on NBC Sports California. Here’s a preview of this week’s show: