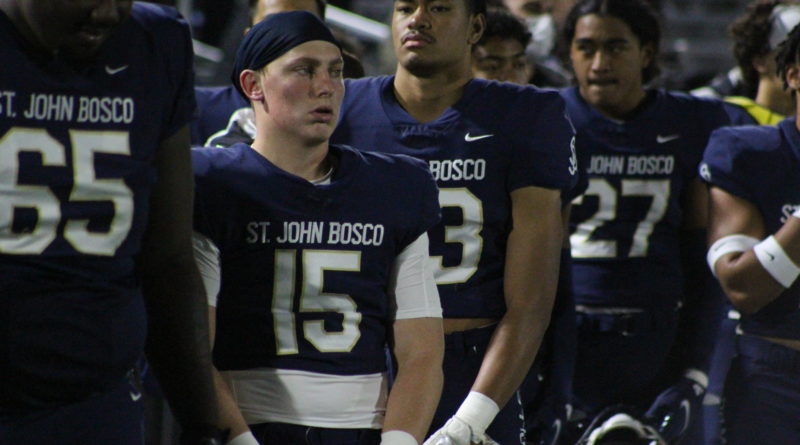 BELLFLOWER — In a battle between two CIF heavyweights Saturday night in Southern California, Sierra Canyon threw the first punch – but St. John Bosco steadied itself and showed why it’s the defending national champion.

The St. John Bosco quarterback race is so tight that head coach Jason Negro said junior quarterback Katin Houser and sophomore QB Pierce Clarkson did “roshambo” to determine who would start Saturday’s game. Clarkson won and the two quarterbacks switched off every series.

Houser made the best throw of the night in the third quarter when he rolled to his right and hit junior Chedon James in the back of the end zone for 21-yard touchdown. Fox Sports color commentator Greg Biggins repeatedly called the TD toss a “college throw” on the Fox broadcast.

“I feel really relieved [about the competition] because this is my first varsity start technically,” Houser said. “Going out there and making plays and putting my team in a good situation is a complete relief on me. I really want to go out there and prove to myself that I can do this and I feel like I did today.”

“We’re going to have to evaluate and grade the guys and see how they did,” Negro said. “We’ll figure that out during the week.”

Sierra Canyon head coach Jon Ellinghouse said he didn’t want to make any excuses for his team’s defeat, but they’re warranted. The 2021 Sierra Canyon football team is darn good, but the Trailblazers have had some breaks go against them this offseason. Last year’s quarterback Chayden Peery ended up enrolling early at Georgia Tech when the football season was pushed back from its planned December start date, leaving the team with a void under center.

Trailblazer starter Daniel Duran transferred into Sierra Canyon a few days before padded practices began and has had two weeks to learn the offense. Going up against St. John Bosco, last year’s undisputed national champions, with a QB so new was always going to be a major challenge.

Even though he threw two picks, Duran did throw two scores and played without fear on Saturday. He’ll be a good match for Ellinghouse, a coach with guts, this spring.

“We just have to execute at a higher level,” Ellinghouse said. “It was sloppy tonight … We have a lot of young kids and kids from different programs, but we’ll get together and play our brand of football quick.”

ST. JOHN BOSCO WINS IN A DIFFERENT WAY THAN 2019

Negro said in the offseason that his team would look different this spring due to losing seniors. Graduating a generational QB in DJ Uiagalelei, who was at the game on Saturday, will of course lead to a new offensive approach.

The Braves want to focus more on the run this spring and try to win games in the trenches. For the most part, that’s what happened Saturday.

Junior tailback Rayshon Luke scored on TD runs of 17 and 67 yards and sophomores Michael Hayes and Clarkson added rushing TDs of their own.

Defensively, Bosco’s strength is on the line and that was on display Saturday as well. Junior defensive end Nathan Burrell batted down multiple Sierra Canyon passes and Matayo Uiagalelei made his presence felt on the other end of the line with a few QB hits.

Even though it was too sloppy at times for his liking, Negro walked off the field happy.

“For us to come out and beat these guys by 21 points, I was super pumped up,” he said.