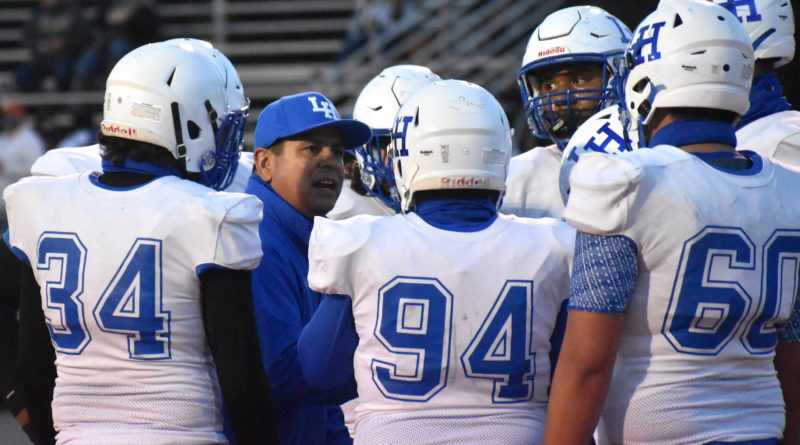 WEST HILLS – High school football games have returned to California. And La Habra and Chaminade were grateful to be on the field Friday night.

In a hastily arranged game, announced just hours before it kicked off, La Habra rolled to a 35-16 season-opening victory. La Habra had been set to play Mission Viejo until COVID-19 protocols forced a late cancellation. Chaminade offered to host a game, and it was on.

LA HABRA COMES UP BIG AT THE LINE OF SCRIMMAGE

While the Highlanders were at a minor size disadvantage in the trenches, it was largely up front where the battle was won.

Their defense set the tone, holding Chaminade to six points through well over three quarters, and the first unit only allowed nine points total. Three-star OLB TJ Patu led the charge for an athletic front seven that pushed the edge aggressively for nearly the whole game, stuffing runs and keeping Chaminade QB Indiana Wijay out of rhythm. Brian Kight, who also had a b and Nico Munoz both returned fumbles for touchdowns.

The offensive line held off a sizable Chaminade front well enough to consistently buy time for sophomore quarterback Justin Gil and create at least one seam for their rushing threats to make headway. La Habra never had “the big play” on offense, but spent the whole first half marching up and down with series of short passes and incremental runs, and the O-line also helped keep plays moving after the initial action.

JUSTIN GIL IS READY TO GO

Whoever was to be named La Habra’s next starting quarterback had huge shoes to fill. Last season they had 3-star Penn commit Ryan Zanelli under center, and he threw for 47 touchdowns with a passer rating of 131.3. Then 5-star C/O 2021 QB Jake Garcia transferred in from Narbonne, but left for Georgia when the California season was in doubt.

But sophomore Justin Gil, who had a strong campaign starting for Villa Park’s freshman team last season, was poised and capable. He completed 14 of 19 passes for 183 yards and a touchdown, and also ran for a touchdown. Henry Jackson, Jacob Apodaca, and Brandon Vasquez had strong nights holding onto his passes and picking up yards after contact. Gil displayed great decision-making as a passer, and he was decisive and effective the small handful of times he decided to keep it himself. He’s clearly a player to watch from a recruiting lens going forward.

BRANDON VASQUEZ: A FIRE YOU CAN’T PUT OUT

Coming off a junior campaign in which he caught for over 1,100 yards, Vasquez’s 38 receiving yards felt modest. But he also had a long kick return to past mid-field to start the game that established momentum from the get-go and helped La Habra get a touchdown barely two minutes into the game. And the energy he brings is clearly an additional contribution.

At 5-9, 175, he’s always one of the smaller players on a football field, but as an aggressive, talented playmaker, he’s bound to take countless hard hits throughout the course of the season. And he always jumps right back up. No example could be more iconic than last season’s opening game, in which he got suplexed by 5-star LB Justin Flowe (an illegal move and 15-yard penalty) and got back up to win La Habra the game scoring two of its three touchdowns. But even in this one, he took numerous particularly hard shots and bounced right back up to pump up the Highlanders’ crowd and sideline. (For example, at 3:47.)

That fire coming from a team’s best offensive player is contagious.

Chaminade wasn’t expecting a fairly lopsided loss for its long-awaited return to football, but the Eagles’ second half displayed plenty of reasons to stay positive. Their defense started the game both very rusty and lacking great energy, but they displayed plenty of grit and fire by the start of the second half. And holding La Habra scoreless in the final two quarters speaks for itself.

Offense seems to be where the Eagles have a longer way to go, but there were plenty of good signs there too. Sophomore quarterback Indiana Wijay struggled facing a ton of pressure up front, but he didn’t lose his poise. Even after getting clobbered numerous times and fumbling twice, he was still ready to go next time he was on the field. Additionally, Chaminade had quite a few uncharacteristic drops coming from its extremely talented receiver corps, and that’s certainly going to be a thing of the past by midseason. Paul Holyfield Jr. looked promising as the Eagles’ new RB1 and made the most of every seam he could find.

Plus, games like this that are announced the morning before kickoff don’t really exist in a normal season. La Habra only found out on Thursday that Mission Viejo had to cancel their match due to COVID-19, and Chaminade previously had no game scheduled. So neither team had any time to watch film to game plan, let alone instill their strategy into their players in practice. While La Habra came out victorious, that’s a brutal way for anyone to resume football after a year and three months. Now when Chaminade takes the field next week against a formidable Serra squad to start league play, this tough debut should be to their advantage.

WHOSE SCORE IS IT ANYWAY?

There was some confusion throughout the stadium about what the score was from the second quarter through after the end of the fourth quarter expiring. Three total scores throughout the game took place during stretches where both head coaches agreed to sub in second unit players. To the confusion of many, the scoreboard read 21-6 at halftime despite two La Habra touchdowns occurring in the second quarter. Chaminade also scored a touchdown in the waning minutes of the game with the starters out.

So, the scoreboard read 21-9 as game time ended, but 35-16 was the official finish. But what’s more important is, two sides came together in the middle of a heated battle to get second unit players some reps in a season where so much has already been taken away from every player.