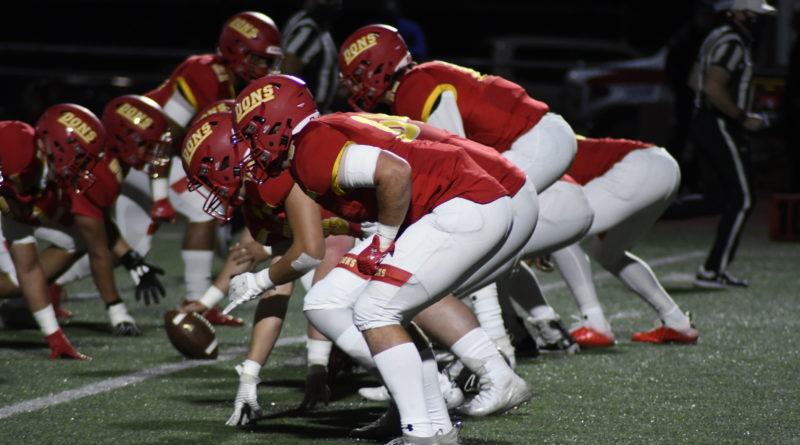 CARMEL VALLEY — In a battle between rivals separated by just over a mile, Cathedral Catholic scored early and often in their 41-0 week one victory against Torrey Pines.

SBLive reporter Bodie DeSilva breaks down his five takeaways from the game below.

Cathedral Catholic junior quarterback Charlie Mirer only had nine opportunities to put the ball in the air on Friday night, but made the most of it by completing five passes for 173 yards and three touchdowns. Mirer was making his third career start for the Dons, the first two coming 16 months ago.

Cathedral Catholic senior defensive back Dee’Shon Swafford got things started by returning a punt 55 yards for a touchdown during the the first quarter and helped lead a defense that forced the Falcons to turn it over four times and made them uncomfortable all night.

“Just trying to bring a spark to the team,” Swafford said of his punt return. “We needed a big play and I like to say big time players make big time plays in big time games, so perfect time to make a big time play so that’s what I tried to do.”

“This might be one of the best teams we’ve ever had as a program, I’m just gonna say that out of bias, I’m on the team but it’s great,” Junior quarterback Charlie Mirer said. “I mean everyone knows if we had a real season who would be the champs, we’re just trying to back that up. We’re trying to go 6-0 and then next year win state, that’s the main goal.”

Without playoffs during the spring 2021 season, the Dons will look to claim a league championship. They’ll travel to Steele Canyon next week before diving into the Western League slate.

Charlie Mirer found senior running back Jack Kilpatrick on a swing pass that he turned into a 35-yard touchdown down the right sideline. The Dons took a 24-0 lead at that point late in the second quarter and zapped any remaining energy from the Falcons.

Prior to the game, Cathedral Catholic honored their former teacher and assistant football coach Mario Fierro, who was tragically killed in February. Fierro served as the Dons special teams coordinator and was a favorite among his students and players.

“It means a lot,” Swafford said of starting the season with a score on special teams. “It’s almost like he’s on the sidelines really because he was the special teams coordinator for us, it’s all in memory of him. I hope we call can portray his legacy in a great way and continue to ball out the season for him.”

With football on pause in California for the past 16 months, teams won’t just pick up where they were back in November of 2019, but the Dons certainly look to be on their way. They excelled in all three phases of the game and scored in each quarter en route to the shutout victory.

“It felt great, it felt really great. It’s been a while since we’ve been on the field, we’ve been working really hard. It’s been over a year, every single one of us wanted to get on the field forever… We played how we we’re supposed to play, I mean its Dons football. We played hard, we’re gonna smack people around that’s how we’re gonna do it,” Charlie Mirer told SBLive following the game.

“Man, it was a blessing,” Swafford said of returning to the field. “Having to deal with COVID, obviously Coach Fierro’s death and all the adversity we’ve been through, it shows this team is really a fighter. That’s what it means to be a Don and it feels great to be back on the field and put out for Coach Fierro.”