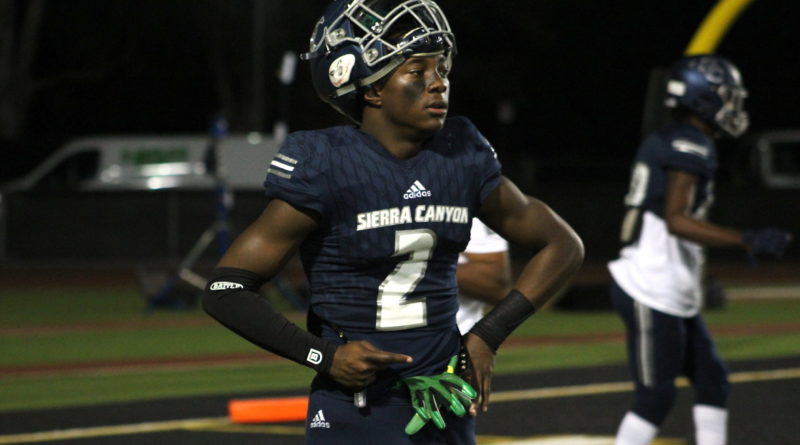 That means our countdown of the top games of the week across the state is back too. Get your popcorn ready for some great matchups in Week 1 of the spring 2021 season.

St. Francis opened up last season with an exciting 24-21 victory over Mira Costa, and looks to do the same again on Saturday. The Golden Knights return a ton of talent on defense, and are led offensively by 3-star WR Bryson Reeves and 3-star RB Max Garrison, both of whom double as DBs.

Mira Costa had a prolific passing game last season and returns top receiver Thomas Southey. He has has multiple scholarship offers, but is looking to break through to the next level of recruiting as a senior.

Additionally, both teams’ leagues have a new potential top dog. Last season, Mira Costa came in second in the Bay League to Palos Verdes, who lost to Culver City in pre-league play – now Culver City has joined the Bay League. And reigning Angelus League co-champion St. Francis now has to deal with 2019 CIFSS Division 4 finalist Loyola. Put it all together, and this has the makings of another great battle between the two sides.

One of two primetime Sac-Joaquin Section non-league clashes in our top 10, this matchup would be a potential CIFSJS Division 2 finals preview in a normal season.

Torrey Pines lost its QB to Texas during the pandemic, but returns four of five O-linemen and all its receivers. They’re switching to a spread offense after being in Wing-T for decades. They have three D-I commits on defense (Wagner commit DB Mo Vanderwiel, Boise State signees LB Marco Notarainni and TE/LB Matt Lauter) plus three others (DE Zach Rowell, DE Ava Leota, and DB Griffin Grant) with offers.

At the helm of the Falcons’ new spread offense will be a new quarterback – 3-star junior Elijah Ortiz, who’s inexperienced but talented and ready to make a name for himself at the varsity level.

Cathedral also has a talented first-time varsity QB1 under center in Charlier Mirer, who received an offer from Michigan during the offseason. His main targets will likely be senior Colman Smith and 3-star junior Rex Haynes. However, the Dons are a run-first squad, with 2-star senior Christian Hall, Jack Kilpatrick, and Lucky Sutton ready to pick up heavier loads. 3-star junior DE Jaxson Moi leads a young but talented defense.

Sonoma County football couldn’t kick off any better with the county’s two top incumbent teams – and two reigning CIF Division 3 state finalists – going at it with a league title on the line.

Rancho took home a North Coast Section Division 3 title last season and defeated Las Lomas in a Regional Bowl game to make the CIF 3-A state title game. The Cougars also gave Cardinal Newman a run for its money in league play last season, coming up short but keeping the deficit to 10 points. That said, Newman is the heavy favorite here, not only for winning a 3-AA state championship last season but in large part because the Cardinals return more of their 2019 team. But this could be a close game – one of California’s only top-flight league play matchups of the week – and both teams know how much is at stake with no postseason to look forward to.

This makes another must-see San Diego showdown to open up the season, with Helix coming in at No. 9 in our statewide rankings and St. Augustine loaded with returning talent. While these teams aren’t in the same league, they played twice last season, including a playoff game. Helix won both games by a combined 11 points, so the stage is set for another potential thriller.

Reigning section champ Helix is dealing with the loss of one of the country’s best quarterbacks, Tyler Buchner, who enrolled early at Notre Dame, leaving QB as a major question mark for now. But the Highlanders are still loaded with talent, including 4-star OL/DL Josh Simmons, 3-star DB Jaiden Brown, 3-star RB Christian Washington, and 3-star WR Clay Petry.

St. Augustine, on the other hand returns its starting QB, 2-star Richie Colmenero. The Saints are also one of the section’s only teams with enough size to not only match up with Helix, but potentially beat the Highlanders up front on either side of the ball. That’s with 4-star DE Gracen Halton, 3-star ILB Malcolm Williams, and 2-star DL Christian Gaeta anchoring the front seven, and a massive O-line featuring TangiTangi Pongia, Luke Bolin, and Misa Sandoval.

Just about every Mission League game is going to be in consideration for a top spot on this list, and the Lancers’ and Knights’ season-opener is no exception. Amat has won two straight league titles, and is certainly in the mix to make it three. Notre Dame dealt with some impactful injuries throughout the course of last season but looked like a real contender at times, and is always a threat to compete for a league title.

This game also presumably features the return of Notre Dame 3-star QB Cooper Meek, who missed essentially all of 2019 with an injury but is now 100%. The year before that, he had an outstanding sophomore campaign and proved himself as a clear D-I talent. Still, 247Sports reports him as having no D-I offers despite his 3-star ranking, so that will be one of the Southern Section’s top storylines to follow this season.

For a while now, Mission Viejo has been the alpha dog in a very crowded field of strong Orange County public school programs. (In fact, last season Mission Viejo was in the discussion for best public school team in the entire country.) MV will certainly be the favorite in every game it plays this season, this week included. But they’ll face another one of the top public school teams in SoCal, a gritty Highlanders squad that understands and embraces the level of competition it’s about to face.

La Habra held the Diablos to three scores last season in a 23-6 loss, and was one of only two teams to hold them to 16 points through three quarters. Slot receiver Brandon Vasquez is the top name to know on offense, one of SoCal’s top receiving threats who caught for over 1,100 yards last season. Justin Gil, a sophomore, will be his new signal caller. High 3-star OLB/DE TJ Patu is La Habra’s defensive anchor.

Like La Habra, Mission Viejo has a new sophomore QB1 and major star talent at SB/WR and LB/DE. Kadin Semonza will start at quarterback, and his main target will be 4-star Cal signee Mavin Anderson. 4-star MLB/EDGE Easton Mascarenas is signed with a Oregon State, and comes off a 91 tackle/17 TFL/5.5 sack/three interception junior campaign. The Diablos have more established talent with 3-star CB Ryder Fitch, 2-star RB Jacquez Robertson, and several others.

Serra won this pre-league battle 27-24 last season, and both teams might be considerably better this season. It features 5-star talent, as Texas commit Maalik Murphy makes his debut as Serra’s QB1. And anyone who’s watched these teams can tell you that it’s bound to get physical. Nowhere in the state will there be a better time and place to catch some Friday night lights.

In addition to Murphy, Serra returns its top rusher, RB Elijah Davis. Davis is also the Cavaliers’ leading returning receiver, and could be a featured receiving option again alongside breakout candidates in 3-star WR Brody McKinnon and Devin Ford. Their defense, loaded with athletes, should be fun to watch as well. 3-star LB Lando Brown is one of the most underrated – and outright best – defensive players in the state, recording a staggering line of 99 tackles, 29 tackles for loss, and 19 sacks as a junior. He forms a vicious ILB tandem with Tyray O’Dell, and 4-star UCLA signee Devin Kirkwood looms in the secondary.

Meanwhile, Poly also has a talented junior QB ready for his chance as a starter in Shea Kuykendall, who has a deep receiver corps to work with that includes 3-star New Mexico commit Keyonta Lanier. The Jackrabbits’ senior LB/DE duo of Bryun Parham and Jacob Tuioti combined for a ridiculous 173 tackles, 46 tackles for loss, and 13 sacks, and as always will have a blazing fast secondary behind them.

Arguably the top two teams in the Sac-Joaquin Section start the season with a bang this Saturday. Oak Ridge is the reigning champ after edging out Monterey Trail by one score in the finals after Monterey Trail upset Folsom in the semifinals. Both squads are talented as usual, and are in a similar boat as both lost 3-star QBs to early graduation.

Folsom will debut not only a new starting QB but also a deep arsenal of young, talented receiving threats. In addition to JR. Austin McMillan, Folsom has one of the highest-upside sophomore receiving corps in the state with WRs Rico Flores and DJ Brown and TEs Walker Lyons and Mason Norberg. Talented senior RB Mitch Anderson will also be unleashed. Defense is where Folsom has a ton of experience, with DLs Jake Melander, Khalil Habib, and Apollo Jeffs returning alongside DBs Lonnell Turbin, Dorian Blackwell, and Michael Chavez.

Taking over at QB for Oak Ridge will be sophomore Drew Cowart, and he’ll have one of the section’s top WRs to pass to in Brandon Barthel. Where the Trojans return the most talent is throughout the front seven, with LB Ryan Enney coming off a huge junior season and Hunter Nabers, Elijah Hansen, and Drew VanKomen all ready to make an impact while doubling as OLs or TEs. Oak Ridge has more roster holes, but is still the Sac-Joaquin Section team to be beat until proven otherwise, which is exactly what Folsom will try to prove this week. While there aren’t any postseason championship games this season, this matchup might feel like one.

While this isn’t a league game, Sierra Canyon against the reigning national champion is as an exciting of a season-opener as the high school football world could ask for.

St. John Bosco will miss numerous focal points on both sides of the ball from last year’s powerhouse, but it’s no secret that the Braves might still be the best team in the country in the 2020-21 season. That said, two-time reigning section champ and state finalist Sierra Canyon was absolutely in the mix for section and state titles at the open division level this season before the playoffs were canceled. A team that made the CIF 1-AA title game and finished ranked in the top-50 in the country last season, the Trailblazers return enough talent to have a chance against anyone.

There are too many stars to name in this one, but football fans across the country will be tuning in Saturday night to watch these heavyweights go at it.

In any given week of California high school football, there are a few dozen great games to watch between top programs. Here are some other exciting matchups happening this week: