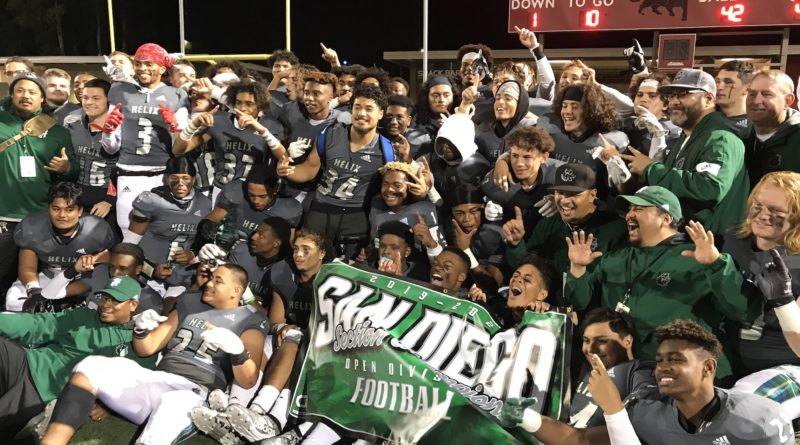 The Highlanders captured the Open Division Championship in 2019, their third in the past five years. Despite key losses on both sides of the ball, the Highlanders return a strong senior class and add in transfers Josh Simmons (San Diego State signee) and Clay Petry (Penn signee). Helix has yet to announce their starting quarterback but will have the luxury of easing him in with top flight players surrounding him.

Oceanside returns 13 starters from last season’s CIF Division 1 Championship team, including eight on the defensive side. Senior running back Kavika Tua eclipsed the 2,000-yard mark last season and is ready for an encore. The Pirates are the favorite in what will be a deep and talented Avocado League.

The Dons graduated five All-CIF selections from a season ago but still return 13 starters and have several talented underclassmen ready to make their mark. Christian Hall, Lucky Sutton, and Jack Kilpatrick should form an excellent rushing trio.

“We’ve got some pieces to the puzzle, it’s just a matter of how quickly can we get continuity. We’re typically that no-name defense. We profess to the kids we don’t need that superstar, we just need eleven guys that are gonna get to the ball really fast and play that punishing style of defense,” Cathedral Catholic Defensive Coordinator John Montali said of this year’s group.

The Hornets combination of young talent and impact transfers should give them their best team in recent memory. Sophomore quarterback Samuel Cooper looks to be among the breakout candidates during the 2021 spring season.

“This is probably the biggest we’ve been since I’ve been here,” Lincoln Asst. Head Coach Jason Carter told SBLive. “We average six-four and a half across the offensive line. You feel really good when you know you’ve got the beef up front. Then you look at those wide receivers and they can hit a home run with a three-yard pass or a five-yard out.”

The Saints are big up front on both sides of the ball led by junior defensive lineman and Oregon commit Gracen Halton. Experienced quarterback Richard Colmenero III returns under center and will have several young but talented weapons at his disposal.

“I am really excited about our (offensive) line. The guys are super big, strong, and athletic. They just look like a group that’s going to be really good for us,” St. Augustine Head Coach Joe Kremer said.

Torrey Pines has their best defense in several years led by Boise State signees Marco Notarainni and Matt Lauter and Wagner commit Mo Vanderwiel. They return four of five offensive linemen as well as all their receivers with transfer quarterback Elijah Ortiz taking over under center. Zach Rowell is one to watch as part of San Diego’s loaded defensive line group in the 2022 class.

Week 1: at No. 3 Cathedral Catholic

El Camino went on a late season run in 2019, sparked by sophomore quarterback Kiah Reid. The Wildcats took the CIF Division 2 Championship and advanced to the D3-AA State title game. El Camino should be strong up front on both sides of the ball and will have several playmakers to compliment Reid.

The Crusaders have one of San Diego’s most talented rosters led by quarterback Trevor Appelman (New Mexico State signee) and defensive back Darren Barkins (Oregon signee). Tre Edwards and Chris Snyder are among the best sophomore prospects in Southern California. They’ll get a challenge against San Diego’s best, Helix, in week two.

The Lancers have experience at the quarterback position with Penn signee Aidan Sayin but will need to find him help on the outside after graduating nearly every receiver from 2019. Running back Mazlo Norwood was off to a strong start as a junior before a season ending injury and should provide a boost in the running game. Senior Dylan Smith is one of San Diego’s top offensive linemen.

Mission Hills has experience on offense in receiver Skai Donnell, running back Cameron Woolsey, and lineman Troy Faulker that will help to ease in quarterback Gunner Hensley who transfers in from Carlsbad after playing junior varsity last season. Defensive back Elisha Lloyd, a Utah signee, leads what should be a strong unit. Junior Jaiden Letua is a breakout candidate at linebacker.