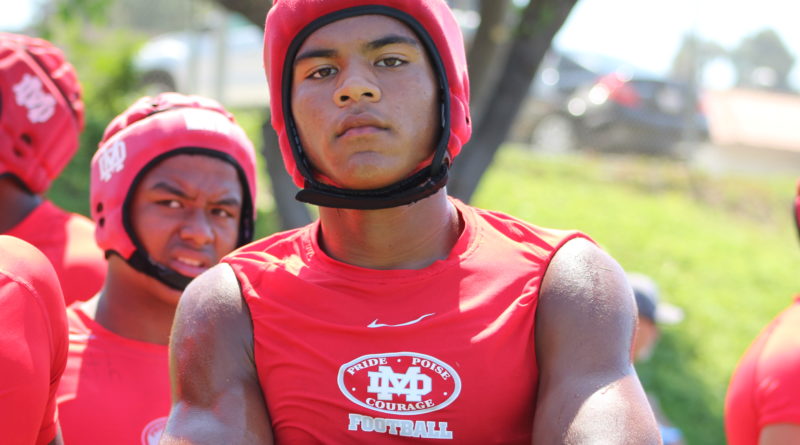 The spring 2021 high school football season in California begins on Thursday. Ahead of the abbreviated season in the Southern Section, SBLive California reporter Connor Morrissette will preview some of the top leagues in Southern California.

Here’s everything you need to know about the Trinity League, arguably the best high school football league in the country:

The Monarchs have talent all over the field. They have the best secondary and receiving corps in California led by 2021 wideout Kyron Ware-Hudson and 2022 cornerback Domani Jackson, both USC commits (Ware-Hudson is signed).

Raesjon Davis, a third USC commit (also signed), is the top 2021 linebacker in California. Air Force commit Marceese Yetts and 2022 Oklahoma commit Raleek Brown lead a very talented backfield. Colorado State signee George Miki-Han and stud 2023 lineman BJ Tolo return to protect the quarterback. The defensive line and quarterback spots are the only areas that will be inexperienced this spring.

Junior Emmett Brown, sophomore Parker Awad and freshman Elijah Brown are all competing to win the starting quarterback job. Whoever wins the QB1 competition will be an x-factor. Head coach Bruce Rollinson isn’t afraid to play freshman Elijah Brown if he’s the best option for the Monarchs’ opener against JSerra on March 19.

The Braves are the defending national champions and our preseason No. 1 team in California.

St. John Bosco won the Division 1 CIF Southern Section championship in 2019 against Mater Dei, and even though they lost a lot of great seniors from that team, there is enough talent in the pipeline to win a Trinity League title this spring.

Sophomore Pierce Clarkson and junior Katin Houser are competing to win the starting quarterback job. Both are Division 1 recruits and both will play this spring.

St. John Bosco’s offense is very balanced and will put up a lot of points. Offensive coordinator Steven Lo is one of the best in California.

BIGGEST QUESTION FOR ST. JOHN BOSCO: The Braves have a lot of big names at linebacker and in the secondary – but they’re young. Can their freshmen and sophomores on defense rise to the occasion and lead St. John Bosco to a Trinity League title?

This year it’s Servite, not Mater Dei or St. John Bosco, who returns its star quarterback. Class of 2022 gunslinger Noah Fifita is back for the Friars fresh off an offseason that has seen his recruitment take off. He’s the top QB in the Trinity League and he’s throwing to the best wide receiver in 2022 wideout Tetairoa McMillan. 2022 USC tight end commit Keyan Burnett is another top target for Fifita.

San Diego State signee Noah Avinger anchors the secondary and may play a little receiver too. Senior utility man Deville Fata could have a breakout season for the Friars at tailback. Behind these standouts, are there enough playmakers to get Servite over the hump? That’s what we’ll be watching.

The junior class at Servite is special. They will get two chances to win the school’s first league title since 2011 this spring and then again this fall.

BIGGEST QUESTION FOR SERVITE: The passing game has the potential to be the league’s best, but what about the rest of the team? There are other gems on the Servite roster, but does Servite have the proper depth required to win the Trinity League?

JSerra was hit with quite the transfer bug in the offseason as at least 15 players left the school. There is still talent in the Lions program however, headlined by 2021 offensive lineman Mason Murphy (USC signee) and 2021 linebacker Jaden Genova (Army commit). Sophomore quarterback Jaxon Potter will get the nod under center this spring.

No matter what happens this spring, Harlow will get a chance to see which underclassmen can help him in the fall. He’s going to learn a lot about his team over the course of JSerra’s five league games. Between the COVID-19 layoff and the Lions’ inexperience, JSerra is a bit of a question mark. Going 2-3 in the league is a possibility, but so is going 0-5.

BIGGEST QUESTION FOR JSERRA: Can the Lions win two games again to take fourth place in the Trinity League?

The Lancers bring back a talented offensive line, which will be the strength of the team. Senior Rice commit Faaeanuu Pepe will be the “key to the run game,” according to head coach JP Presley.

Junior Logan Gonzalez will start at QB and senior Joey Feghali and juniors Desmin Jackson and Jason Terry will carry the ball for Orange Lutheran this spring. Terry transferred from Fairmont Prep, where he rushed for 2,186 yards and 28 touchdowns in 2019. The Lancers will be solid on offense.

Defensively, there are question marks, especially on the line.

“We have a lot of guys that are worth watching this season,” Rouzier said. “It’s a nice thing for us. It hasn’t been like this for a long time.”

“Hero probably has the highest ceiling on our team,” Rouzier said.

On the offensive side of the ball, the Eagles bring back senior quarterback Colt Fulton and Rouzier is excited about senior running back Hussein Santillan, a transfer from Mexico City. Junior Ian Grogan will be the team’s top receiver.

BIGGEST QUESTION FOR SANTA MARGARITA: How big of a jump can the Eagles make this spring? The talent is there, but between having a new head coach, a handful of transfers and an extremely shortened run-up of practices before games begin, how much progress can be made from last season? Rouzier has been on the staff for the two previous seasons as an assistant, so he isn’t completely new, but he faces the tough task of getting the most out of a talented group in a year when they needed spring ball and summer ball to adequately prepare.