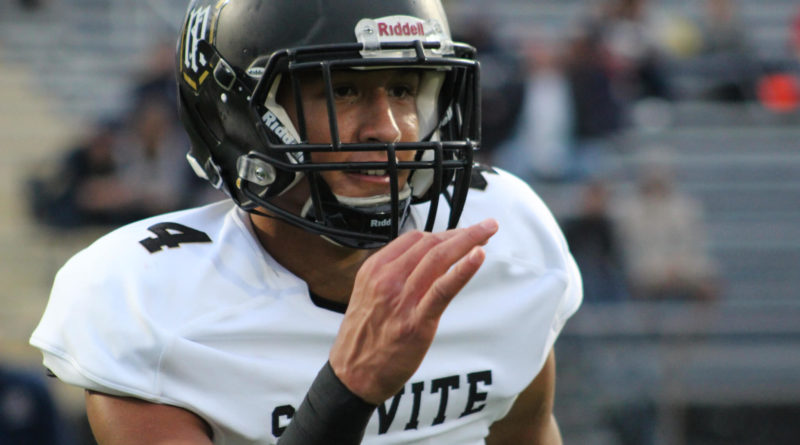 With the spring 2021 football season getting ready to kick off SBLive California continues to take a look at the top high school football players in the state, position by position.

After taking an in-depth look at the best wide receivers in every section, we’re now breaking down the top receivers in the state.

The main criteria for our Top 25 WR rankings are statistics from the 2019 high school season relative to team success (on offense) and strength of schedule. The rankings were compiled by SBLive reporters Bodie DeSilva, Lance Smith and Connor Morrissette.

Class of 2021 WRs who have decided to graduate and enroll early in college were not considered in these rankings.

Hall had a solid sophomore season at running back before making the move to receiver as a junior. He responded with 70 catches for 893 yards and eight touchdowns. He’s transferred from Bakersfield Ridgeview to Garces Memorial for his senior year and has signed with Cal Poly.

Cristofalo was a dominant offensive weapon for the Padres in 2019. He caught 55 passes for 1,203 yards and nine touchdowns and showed his versatility by playing running back and averaging 10 yards per carry.

A high 3-star recruit, Cope picked Utah over a dozen other offers after finishing with over 800 receiving yards as a junior. Cope will be a star of what’s sure to be another elite Culver City passing attack this spring.

Petry saw time on both sides of the ball and even played some quarterback during his three seasons at The Bishop’s School. He took the next step as a junior finishing with 1,204 receiving yards and 14 touchdowns. He’s transferred to Helix High School for his final season and committed to The University of Pennsylvania in December.

Fox, a 4-star prospect, has been one of the most versatile offensive threats in SoCal since his freshman year of high school. He can dominate a game running the ball, receiving at slot or wideout, and returning both kicks and punts. Most games, he’s doing all of the above, and he comes into his junior season with an astounding career line of 1,008 receiving yards, 919 rushing yards, 658 KR yards, and 455 PR yards – over 3,000 yards total.

In 2019, Vasquez totaled 1,104 receiving yards, 12 receiving touchdowns, and 73 rushing yards for an explosive La Habra offense. He’s one of the premier pure slot receivers in the state. So far, Vasquez has been underrated from a recruiting standpoint, and is easily one of SoCal’s best available offensive playmakers.

As a sophomore at Canoga Park, Arango-Serna led the L.A. City Section in receiving yardage last season with 1,341. He also finished with 15 receiving touchdowns for the Division II champs, giving him career totals of 2,364 yards receiving and 22 touchdowns just in his underclassman years. While it won’t benefit him in these rankings, he was a standout FS too last season too with five picks and 41 tackles. Arango-Serna is a 3-star prospect with three Ivy League offers.

One of the best athletes in San Diego, Jessie jumped onto the map last season after catching 65 passes for 972 yards and 16 touchdowns for the Patriots. He’s signed with New Mexico.

A candidate for San Diego’s fastest player, Tucker is arguably the top two-way player in the section. He caught 17 passes for 440 yards and five touchdowns during his sophomore season at St. Augustine and added four interceptions and two forced fumbles on defense. Tucker has offers from nearly all of the Pac-12 schools as well as several other schools nationally and has transferred to Lincoln High School.

Meredith saw time at both running back and receiver last year playing in Valhalla’s run-heavy offense, totaling 390 yards and three touchdowns over six games. He’s spending his senior season at Mater Dei Catholic where he should post huge numbers in the Crusaders’ high-octane offense. Meredith signed with Washington State in December.

The top receiver in the High Desert, Smith finished with 1,037 receiving yards and 17 touchdowns last season. That came in only 11 games with Apple Valley’s starters coming out early in a lot of blowout wins.

A 4-star ATH signed with USC, Bullock is one of the top three-phase players in California. Last season for a formidable Mustangs squad, he finished the season with 914 receiving yards and eight touchdowns, and also had over 200 returning yards in special teams.

While Bullock is a Power-5 caliber wideout, he’s an even better FS, and DB is expected to be his primary position once he’s a Trojan. It didn’t factor into these rankings, but he had six interceptions, 45 tackles (29 solo), and a sack last season in the secondary.

Nunnally, a 3-star Washington State signee, was a key cog in Cardinal Newman’s 14-1 3-AA state championship team a year ago. In 10 games, he hauled in 10 TDs and ran for 29 yards and two more scores. He did that playing alongside another future D-I receiver a year above him in a balanced offense that spread the production around. He finished 2019 with over 700 passing yards as well.

When it’s all said and done, Boardingham has a chance to be among the top wide receivers the City Section has ever produced. He currently holds scholarship offers from Notre Dame, Arizona State and Nevada, among others.

Last season, Boardingham caught 54 passes for 910 yards and 12 touchdowns as a sophomore for the Open Division champion Patriots. He was an All-City first team pick.

As a junior, Staples ended the year with 1,087 yards and 11 touchdowns in just nine games despite facing regular double and triple coverage. The high 3-star prospect picked UCLA over at least 17 other schools, and possesses elite upside at 6-2, 180, with track star speed.

As just a sophomore, Green had 1,076 receiving yards and eight receiving touchdowns going against outstanding secondaries nearly every week. Green, a 4-star prospect, has at least 11 offers heading into his junior season.

Williams carried a heavy load as the focal point of a very talented but young Etiwanda offense last season, and he put up monster numbers. In 12 games, he totaled 1,218 receiving yards, 11 receiving touchdowns, 242 yards and two touchdowns rushing, and 295 KR yards. Williams is currently a 4-star prospect with at least seven offers from mostly Power-5 schools.

A 4-star Cal signee, Anderson’s ability to thrive as both a slot receiver and downfield threat might be unmatched in California. His 2019 numbers were deflated by the Diablos’ proficiency in ending games before halftime, but he still caught seven touchdowns in 11 games. Even more than that, the constant attention he commanded in opponents’ game plans greatly helped keep the field open for one of the better offenses in the country.

SBLive’s reigning L.A. County All-Purpose Player of the Year, Harvey is a top-five receiver in the section while dominating even more on the defensive side of the ball. On offense, he finished with 1,465 yards and seven touchdowns for the Division 2 champ and CIF 1-AA state finalist Trailblazers. He was one of SoCal’s best return specialists with 312 KR yards and 269 PR yards (581 in total). And while it doesn’t factor into our WR ranking, he’s a 4-star Virginia Tech signee at cornerback who registered four picks and 25 passes defensed as a junior.

Marshall is the top receiver in the Sac-Joaquin Section. Last season he made 68 catches for 1,128 yards and nine TDs. He’s received 12 Division 1 scholarship offers, per 247Sports.com.

A consensus top-five receiver in the Class of 2022, Williams was up to a mind-blowing 48 offers before dropping a top-16 in November. That came before ever taking a snap on a football field as an upperclassman. As a sophomore, he was third on one of the best teams in the country with 684 receiving yards. Expect Williams to contend for the top spot going forward with Kody Epps and Cristian Dixon now in college.

In terms of production, Peters is the top returning WR in the section. He helped lead a Sentinels squad that went 0-10 in 2018 to a 12-1 season and Division 13 semifinals appearance in 2019. He finished the season with 1,478 yards and 18 touchdowns. A 3-star prospect, Peters picked Washington State out of a dozen schools to offer him.

With 853 yards and 13 touchdowns receiving, Ware-Hudson was the WR2 for arguably the best passing game in the country last season. The 4-star USC commit possesses particularly steady hands, blazing speed, and the body control to make contorted catches in coverage look way too easy. Without a doubt, he’ll be in the running for status as the best WR in California this spring.

Expectations were high for T-Mac upon first stepping onto a varsity field in 2019, having already been ranked as the number one WR in the Class of 2022, and McMillan lived up to them to every degree, oftentimes in highlight fashion. In just 10 games going against some of the best defenses in high school, he was second on the Friars with 851 receiving yards and 12 touchdowns, and first in receptions with 65.

McMillan, a 5-star prospect with at least 24 offers, has two more seasons to headline a dominant passing game with arguably the section’s best quarterback, Noah Fifita, who recently came on the SBLive California Podcast. They have a strong chance to prove themselves as the best QB/WR tandem in the entire Class of 2022 before it’s all said and done, while potentially getting Servite over the top.