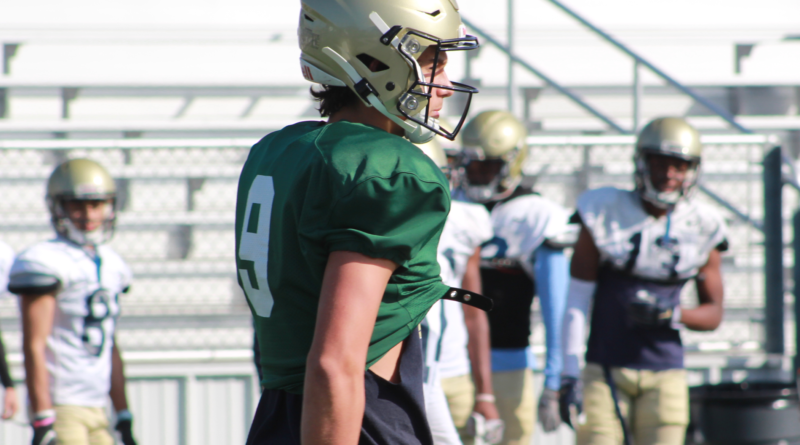 The 2021 spring high school football season in California will look a lot different than the usual fall program.

There will be fewer games, less time to prepare and no postseason. Another interesting wrinkle will be how teams decide on playing time. Will some coaches let seniors play in favor of more talented younger players as an act of good faith for sticking with their teams through the depths of the pandemic? It’s possible.

And what about the quarterback spot? Teams that return their starters are very fortunate. In a shortened season with 14 days of padded practice before game one, first-year starters will be baptized by fire this spring.

The best game of Week One in Southern California pits the reigning Division 2 Southern Section champion Sierra Canyon Trailblazers against last year’s Division 1 champions, the St. John Bosco Braves. Both teams need to replace last year’s starting quarterbacks following the early graduation of Sierra Canyon’s Chayden Peery (Georgia Tech) and the graduation of St. John Bosco’s DJ Uiagalelei, who started two games for Clemson in 2019. Neither team has named a starter and the game is less than two weeks away (March 13). Welcome to high school football in a pandemic.

Junior Daniel Duran, sophomore Ryan Staub and freshman Alonzo Contreras are all competing for Sierra Canyon’s QB1 spot. Staub is the only player who was with the program a year ago. Duran recently transferred from St. Bonaventure.

“We’re going equal reps right now,” Sierra Canyon head coach Jon Ellinghouse told SBLive. “Usually we would be competing in passing league all summer and doing tournaments and getting a lot of reps and an understanding of what every guy can do. We’ve had some time with two of the three and we’ve got a shortened camp, but we do have a couple of weeks.”

Ellinghouse hopes to name a starting quarterback instead of going with a platoon.

“There aren’t really many ties in life,” he said. “In my experience, someone will put their foot on the gas and take it and that’s my hope here.”

The situation at St. John Bosco is similar, but the competition is between two quarterbacks: sophomore Pierce Clarkson and junior Katin Houser. Both Clarkson and Houser have received Division I scholarship offers in the past few weeks. Clarkson played on Bosco’s lower level teams a season ago and Houser transferred in from Liberty High School in Nevada last spring.

“The lack of time to evaluate has been super challenging,” St. John Bosco head coach Jason Negro told SBLive. “At the end of the day, we have to establish as much stress upon them in practice, to make it as game like as possible to get them ready. We don’t know where we’re at right now, other than the fact that they’re competing super hard.”

Negro is comfortable waiting until after the season begins to officially name the starter and wouldn’t rule out both playing significant snaps multiple games into the year.

“Ideally we want to have one guy that takes the responsibility to be the starter because he just has a bit of a better flow, however if we can’t determine who that guy is going to be, we’re going to play both of them out of necessity,” he said. “We’re not going to make a decision without allowing them to compete the way they need to compete. It’s our responsibility to evaluate them in game like situations and we haven’t had that. It could potentially fade into the season where we’re going to use multiple guys.”

Taking over for Uiagalelei will be no small task, but both Houser and Clarkson are confident in themselves ahead of a decision from Negro and his staff.

“I’m still competing, but I really like my odds,” Houser said. “I feel like I mesh well with this team and we’re going to do really well this year.”

“I’m just doing what I can do,” Clarkson said. “I’m not worried about anything else. I’m just competing and coming here every day getting ready to work. So far it’s going well.”