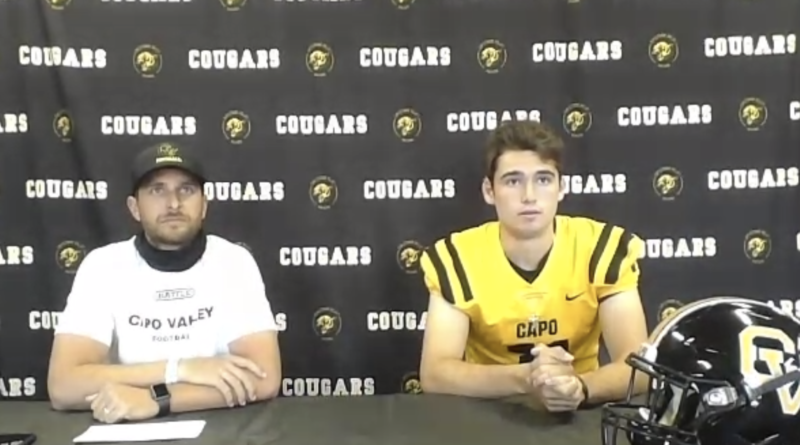 La Habra will have a new quarterback this season following the graduation of Ryan Zanelli (Penn). Sophomore Justin Gil, a Villa Park transfer, has won the job. Sophomore Ryan Vasquez was also competing for the job, but picked up an injury and will miss this season. Multiple La Habra players said their opener against Mission Viejo was the game they’re most excited for in 2021.

Similarly to La Habra, San Clemente’s players have their finale against Mission Viejo circled on their calendars as the biggest of the year.

The team is excited about junior quarterback Lochlan Rosmalen, a transfer from St. John Bosco. Swarthout mentioned how Rosmalen has tremendous leadership skills.

San Clemente had to forfeit all of their games a year ago and were kicked out of the Southern Section playoffs due to fielding an ineligible player. Tritons head coach Jaime Ortiz is excited to have a clean slate this spring.

“Every year is a new journey and our kids know that what’s in the past is in the past,” Ortiz said.

San Clemente assistant football coach Joe Wood died of COVID-19 in February. The Tritons have dedicated their season to Wood.

Sophomore Kadin Semonza has been named Mission Viejo’s starting quarterback for the spring. He replaces Peter Costelli who graduated in December and enrolled at Utah. Even with a new quarterback, the Diablos are the preseason favorite in the South Coast League following last season’s Division 1 Southern Section semifinal appearance. Star linebacker Easton Mascarenas (Oregon State signee) and star receiver Mavin Anderson (Cal signee) will suit up for Mission Viejo this spring.

Capo Valley brings back six starters on offense and eight on defense this spring. The most important returner for the Cougars is senior quarterback Dartanyon Moussiaux. He threw for 2,139 yards and 20 touchdowns playing a brutally tough schedule in 2019. With Moussiaux leading the offense, expect Capo Valley to compete for a Sea View League championship.

Second year head coach Sean Curtis said five or six players will focus on other sports and not play football for the Cougars this spring and that a few others will attempt to play multiple sports at once.

“Those guys are going to try their best to do both and we’re going to work with their coach to see if we can get it done,” Curtis said. “It’s a strange year.”

Hudson Jones is a three year returning starter under center for the Stallions, who will be in the South Coast league this season. Playing against Mission Viejo, San Clemente, and Tesoro will be a challenge, but the defending Division 4 Southern Section champions will be up for it.

Jones nearly moved with his family to Arizona in order to play high school football in the offseason, but they elected to stay at San Juan Hills.

“We were thinking about it,” Jones said. “But when CIF announced that they were going to push the season back, we were excited to stay and obviously it worked out well.”

It will be a bit of a rebuilding year for Tesoro this spring.

“We were extremely senior-laden last season,” head coach Matt Poston said. “We ended up winning ten games and a lot of that was because of the senior class. We have three starters coming back on each side of the ball, but last year’s junior class is a group that has paid its dues and is ready.”

Poston also discussed what happens if Orange County stays in the seven to 14 COVID-19 cases per 100,000 people bracket and his team needs to be tested for coronavirus weekly ahead of games. If that occurs, even a single positive test could be very costly.

“If a player has a positive test, obviously they’re going to be out, but then they’re going to do the contact tracing,” Poston said. “Who did that player spend significant time with in the situation? Using our offensive line as an example, if one of them gets a positive test and they trace it to the others, I don’t know how we’d go into a game without an offensive line, so to speak.”