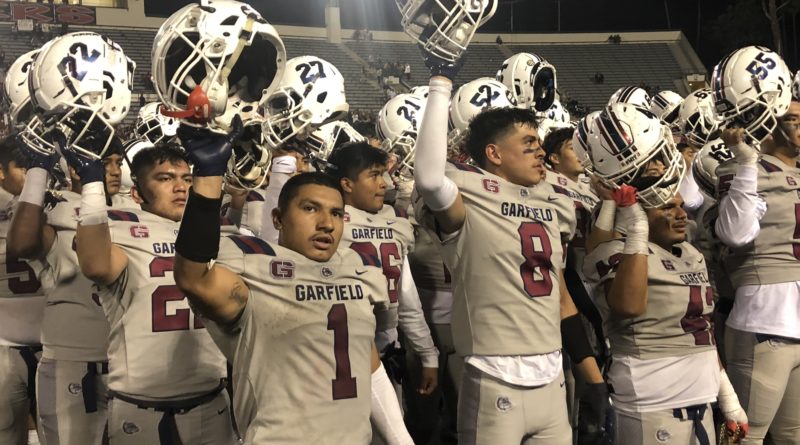 Many high school football teams throughout California will have their first padded practice today or early next week after the the California Department of Public Health updated its return-to-play guidelines last week.

Schools in counties that have an adjusted case rate equal to or less than 14 COVID-19 cases per 100,000 people have been cleared to begin padded football practice today. Los Angeles County met that threshold in the latest numbers released Tuesday, yet there will be no athletic practices of any kind today at non-charter schools in the Los Angeles Unified School District.

Public school districts and private schools can choose to be more restrictive than the CDPH guidance, and right now that’s exactly what’s happening at LAUSD. Football coaches in the district are understanding, but frustrated about the lack of a path forward.

“El Monte Unified did the right thing,” Boyle Heights Roosevelt head coach Aldo Parral said Thursday. “Their board came out and said they’re not having Season 1 Sports and that was that.”

Right now, all signs point to the football season being canceled in LAUSD, but what’s complicating matters is that LAUSD Superintendent Austin Beutner announced Monday that high school teams in the District can return to socially distanced athletic conditioning in March.

“In anticipation of a more complete reopening of schools in April, we will begin next week to offer child care, one-on-one and small group instruction, services for students with special needs and a return to athletic conditioning. Your school principal will have more information on this during the course of the week,” he said.

Athletic conditioning had been paused following the post-Thanksgiving surge of COVID-19 cases in LA County in early December. Bringing back conditioning is a step in the right direction, but there’s no guarantee that it will lead to sports – especially Season 1 sports like football – being played.

Like Parral, Arreola just wants a decision to be made. If the District doesn’t think it’s realistic to have Season 1 sports this spring then he’d prefer them to just cancel until the fall and let high school athletes gear up to potentially participate in a Season 2 sport. The lack of transparency and communication has been frustrating for coaches to deal with.

“What sucks is that the District keeps putting it out like there’s hope,” Parral said. “That’s wrong. It’s like your mom and dad splitting up and then your dad starts coming around again and it looks like they’re getting back together and then boom, they just break up again.”

The majority of LA City Section football coaches want a season this spring, but they recognize that despite the state and county okaying the sport, it will still be a major challenge for LAUSD to play.

“I understand if the kids aren’t given the opportunity to play because like I tell everyone, our community has been decimated, especially East LA,” Garfield head football coach Lorenzo Hernandez told SBLive. “I had kids telling me they couldn’t show up in the past because they had COVID and that would happen once or twice a week. Whichever way our Superintendent goes, I’m going to have to support it because I’ve lived it and I understand it. Our offensive coordinator’s brother, a former player of mine, passed away from COVID.”

Even with decreasing case rates and a county health department that says it’s okay to play, there are still COVID-19 risks to playing, risks that will continue to exist until more people receive the COVID-19 vaccine.

“Playing isn’t the safe route,” Parral said. “To keep kids off the field is a safe route.”

And that’s the issue. All along Buetner has stated LAUSD won’t compromise safety when reopening schools. It’s why elementary schools aren’t open in the District, even though LA County says they can be. Buetner says that in order to reopen those schools 25,000 District employees must be vaccinated. He wants to reopen other schools by April.

There’s a path forward to returning to school, which is the District’s main priority. But how do high school athletics factor into that plan? Right now, we don’t know.