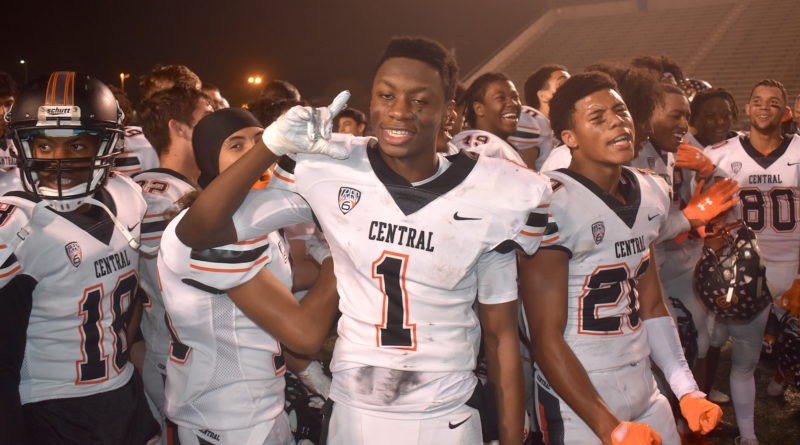 Here’s a closer look at the Top 15 wide receivers in the CIF Central Section heading into the 2020-21 season. The rankings were compiled by SBLive reporter Bodie DeSilva.

James only caught 22 passes in 2019 but was able to turn that into 446 yards and three touchdowns. He should see a bigger role after the graduation of several other receivers.

Salinas stepped up for the Aztecs during his first season on campus by leading the team in rushing and receiving. He ended the year with 57 catches for 786 yards and eight touchdowns.

The Tigers had two 1,000-yard rushers in 2019 but looked in Cordova’s direction when they threw. He hauled in 22 passes for 518 yards and five touchdowns.

Weaver nearly doubled his production from his sophomore season, finishing with 30 catches for 530 yards and five touchdowns in 2019.

Allen caught 36 passes for 460 yards and five touchdowns during his sophomore season and should be a name to watch over the next couple of seasons while playing for one of the state’s top teams.

Magana has been a big piece of the Tigers offense over the past two seasons, totaling over 100 catches, nearly 1,200 yards, and 12 touchdowns during that time.

Holmes was a part of a strong receiving group that helped the Mustangs to an undefeated league championship in 2019. He finished his junior season with 30 catches for 528 yards and seven touchdowns while also averaging 14 yards per carry on the ground.

The Royals threw the ball less than 20 percent of the time in 2019, but often looked towards Berkeley when putting the ball in the air. He finished the year with 15 catches for 503 yards and four touchdowns. He’s signed with San Jose State.

Lopez got a taste of varsity action as a sophomore and made a huge impact during his junior year as the Tigers top offensive weapon. He finished with 44 catches for 810 yards and 11 touchdowns.

Rodriguez caught 55 of Orosi’s pass completions during the 2019 season. He finished with 915 receiving yards and eight touchdowns through the air while also running for four more touchdowns.

Jimenez was very consistent during his junior season, catching six passes or more in eight of his games. He finished the year with 61 catches for 937 yards and seven touchdowns.

Howard has good size – 6-foot-2, 190 pounds – and he used it to make plays all over the field for Clovis West last season. He signed with Eastern Washington and plans to line up at wide receiver in college.

James has been a dynamic playmaker for The Tribe over the past two seasons. He’s caught 154 passes for 2,040 yards and has scored through the air, on the ground, and in the return game, including a 76-yard kick return with one shoe:

Hall had a solid sophomore season at running back before making the move to receiver as a junior. He responded with 70 catches for 893 yards and eight touchdowns. He’s transferred from Bakersfield Ridgeview to Garces Memorial for his senior year and has signed with Cal Poly.

Worthy caught 54 passes for 992 yards and 16 touchdowns during his junior campaign as he helped the Grizzlies to a perfect season and a CIF D1-AA State Championship. He signed with Michigan in December after strongly considering Alabama. After contemplating whether to enroll early, he has decided to play his senior season at Central.