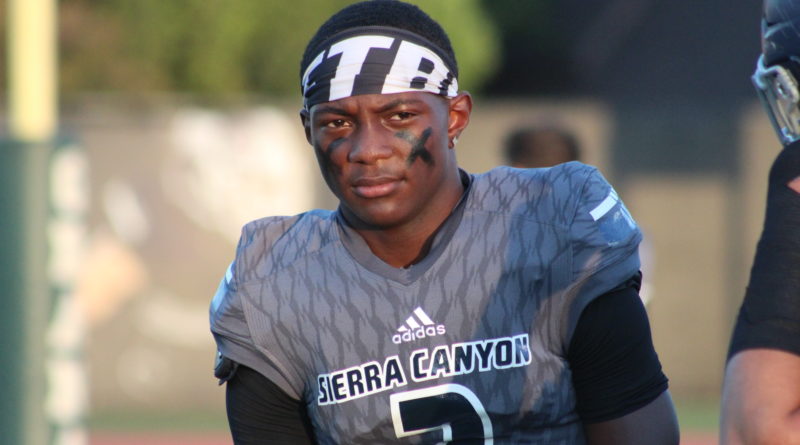 California high school football is back!

SBLive California continues to preview the top football teams and players in the state ahead of the 2020-2021 season. You can find all of our high school football coverage here. And you can download our new iPhone app here.

With the spring football season scheduled to kick off as early as March 11, SBLive is releasing its statewide preseason All-State team. The two teams — first team and second team — were compiled by SBLive reporters Connor Morrissette, Bodie DeSilva and Lance Smith. Players from all 10 CIF Sections were considered.

As just a sophomore playing one of the hardest schedules in the country last season, Fifita threw for 2,892 yards and 37 touchdowns in 11 games. He only had four interceptions and finished with a passer rating of 125.3. Fifita’s recruitment has spiked last season, as he’s now a high 3-star prospect with at least eight offers, including multiple from Power-5 schools.

The second-ranked junior OG in the country, Greene was a pillar of one of the top O-lines in the country last season for the national champion. A 6-5, 330-pound high 4-star prospect, he’s up to at least two dozen offers.

Migao won Lineman of the Year in the loaded Southwestern League last season, and the 6-foot-3, 320-pound guard’s recruitment blew up. He’s now a 3-star prospect who signed with BYU over at least 10 offers, primarily from Power-5 schools. He’s also the reigning SBLive Inland Empire Offensive Lineman of the Year.

A 6-foot-4, 312-pound guard and 4-star recruit, Pulealii signed with UCLA over at least 18 other schools to offer him.

Another future Bruin, DiGiorgio is a high 3-star OT who received over a dozen offers.

Byrne is a 3-star prospect who signed with Oregon State out of 18 offers.

In 2019, Tua led Oceanside to a San Diego Section Division 1 title with 2,166 yards and 21 touchdowns rushing plus 393 yards and two touchdowns receiving. He was also an outstanding punt returner with 220 punt-return yards. Tua is now a 3-star prospect with at least four D-I offers, but remains one of the state’s most underrated offensive backs.

A 5-star prospect with at least 35 offers, Brown ran for 996 yards and 16 touchdowns last season for Edison (Stockton) as a sophomore. He did it on 10.5 yards per carry, a huge mark for the focal point of every opposing defense, and also led the Vikings with 667 yards and nine touchdowns in the air. Brown will now suit up for Mater Dei and recently committed to Oklahoma.

Last season as a first-year varsity player, the 5-star receiver caught for 851 yards and 12 touchdowns against Trinity League defenses geared to stop the pass. He is up to 23 offers.

Ware-Hudson was a linchpin of one of the best passing attacks in the country last season, catching for 853 yards and 13 touchdowns. The 4-star prospect signed with USC over 10 other offers.

Burrell is up to 4-star status and over a dozen offers after helping lead Bosco to a national championship as a sophomore. He finished the 2019 season with 58 tackles, nine tackles for loss, and 6.5 sacks, and came up clutch throughout the Braves’ playoff run.

The 4-star inside D-lineman had 89 tackles, six TFLs, and three sacks last season as a sophomore. He has at least a dozen offers, primarily Power-5.

A 4-star Oregon commit, Halton recorded 55 tackles, 12 tackles for loss, 3.5 sacks, six pass break-ups, two forced fumbles, and two fumble recoveries as a sophomore. He’s up to 18 offers on defense, and also has upside both catching and running the ball on occasion on offense for the Saints.

A 6-foot-8, 280-pound Nebraska signee who can play anywhere on the defensive line, Weaver finished 2019 with 46 tackles, 12 TFLs, and nine sacks in just 10 games. The 3-star prospect totaled at least 10 offers before choosing the Cornhuskers.

For the second straight year, Davis amassed at least 43 tackles, 16.5 TFLs, and 7.5 sacks in 2019. The 4th-ranked OLB in the country recently signed with USC.

A high 4-star ILB, Tuihalamaka has at least 19 offers with Notre Dame considered the favorite. He had 64 tackles (seven for loss) as a sophomore.

The reigning SBLive L.A. County All-Purpose Player of the Year, Harvey is a 4-star Virginia Tech signee at cornerback. He’s also one of the better WRs and return specialists in high school football, totaling well over 2,000 yards on offense and special teams alone for the CIFSS Division 2 champ.

Another reigning SBLive First Team All-L.A. County member, the USC signee is one of the top lockdown corners in country. A high 4-star prospect, Wright finished with at least 38 offers, and also 279 KR/PR yards on special teams.

Jackson is another CB committed to USC who received in the vicinity of 40 offers. Jackson is a 5-star prospect and is ranked by some as the top corner in the country in the Class of 2022.

Turner-Gooden is a high 4-star ATH prospect with at least 33 offers. His primary position going forward seems to be DB, but he can also play receiver/return specialist at an elite level.

A 3-star Sacramento State signee, Hale threw for 2,047 yards and 17 touchdowns to only three interceptions last season for the CIF Open Division state finalist. He also ran for 588 yards and six TDs.

Martinez was so dominant during his junior season that he was named the Grossmont – Hills League Offensive Player of the Year as he helped lead the Highlanders to the Open Division Championship. He’s signed with Southwest Minnesota State.

A 3-star OG with incredible size – 6-foot-6, 385 pounds – Gibbs was a major contributor in St. John Bosco’s national championship run. He signed with USC out of at least 18 schools to offer him.

A 3-star prospect who can play any spot on the O-line, Spencer committed to Penn over 10 other offers.

Miki-Han was a key figure on arguably the best O-line in the country last season. The 3-star center will play college ball at Colorado State.

A 3-star prospect who could play both tackle or guard in college, Madrigal picked Nevada over 10 other offers.

A future Aztec and 3-star recruit, Murphy caught for 476 yards and eight touchdowns as a junior.

Yet another cornerback committed to USC on our all-state team, Brown is both a 4-star DB prospect and also a D-I caliber running back. Last season he ran for 779 yards and 11 TDs on a massive 12.2 yards per carry, caught for 343 yards and five touchdowns, and had 342 kick-return yards to boot.

A 4-star prospect, Luke was the top rushing threat last year on the national champ as a sophomore with 700 yards and nine touchdowns. He also caught for 131 yards and a score.

Peters was one of the top receivers in California as a junior with 1,478 yards and 18 touchdowns. The 3-star recruit picked Washington State out of at least a dozen offers.

Williams caught for 684 yards and four touchdowns in a stacked Mater Dei receiver corps as a sophomore. A high 4-star recruit with roughly 50 offers, Williams and Kyron Ware-Hudson could form the best WR tandem in the country this season.

As a junior, Posey went off for 90 tackles, 25 tackles for loss, and 10.5 sacks playing some DE and some OLB. He’s an underrated recruit who is not nationally ranked (per 247Sports), but he has been offered at the Power-5 level.

Another underrated recruit who had a huge junior season, Tuioti won Moore League Defensive Player of the Year for his 61 tackles, 22 TFLs, five sacks, 10 QB-hurries, and two forced fumbles.

An underrated piece of Mater Dei’s elite defense last year, Narayan signed with the Navy out of at least 10 offers. He finished 2019 with 50 tackles, 18 TFLs, seven sacks, and two fumble recoveries.

Another underrated front seven prospect from a recruiting perspective, Melander had 50 tackles, nine tackles for loss, 14 QB-hurries, and a team-high six sacks as a junior.

A 3-star prospect overdue for some big D-I offers, Brown erupted for 99 tackles and 19 TFLs as a junior.

A 3-star Army commit, Genova was a centerpiece of an excellent JSerra defense with 84 tackles, eight TFLs, 2.5 sacks, nine QB-hurries, and three forced fumbles as a junior.

A versatile and hard-hitting 4-star Oregon State signee, Mascarenas had 91 tackles, 17 tackles for loss, 5.5 sacks, and three interceptions in 2019.

Tucker enters his third varsity season and has shown his ability on both sides of the ball, totaling five touchdown receptions and four interceptions during his sophomore year. He’s up to 19 scholarship offers.

A 4-star safety with at least 16 offers, Ramsey had 95 tackles for the CIF 1-AA state finalist as a sophomore.

A 4-star ATH signed with USC, Smith does a little bit of everything on the field (running, receiving, and returning the ball) but might be best at cornerback.

A 4-star ATH prospect, Kirkwood signed with UCLA over at least a dozen other offers.

A consensus top-10 punter in his class, Segovia was named an NBC All-American Punter last season.

Bryan is a Notre Dame signee and consensus top-10 kicker in his class.

A top-five ranked long snapper in his class, Greep is committed to Utah.