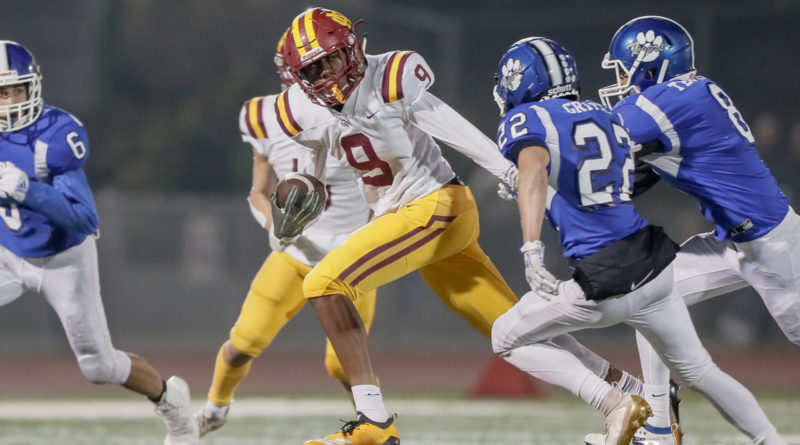 The primary criteria for our Top 10 CIF North Coast Section wide receiver rankings are statistics on offense from the 2019 high school season and strength of schedule. Production as a return specialist on special teams was also taken into consideration. Two-way players’ contributions on defense were noted in the article, but were not factored into the rankings.

Since this is not a recruiting ranking, players’ national rankings or college offers were not main criteria, but were taken into account. Performances in club football or at camps were not taken into consideration.

Here’s a closer look at the Top 10 receivers:

A nationally-ranked APB prospect, Stewart caught for 788 yards and seven touchdowns for the 11-2 Division 5 finalist. He also had nearly 100 returning yards in special teams. Stewart is one of the section’s only elite receiving threats who can shine both in the slot and at wideout, and has a great chance to pick up his first D-I offer with anything of a senior season. And while work on the defensive side of the ball didn’t factor into our rankings, Stewart (CB) is one of several players on this list who also shines in the secondary.

Williams comes in with the least 2019 production on the list, but the 4-star prospect soon will be one of NorCal high school football’s top playmakers. He cracked Pittsburg’s receiver rotation as a freshman with 272 yards and five touchdowns receiving, and he is guaranteed to rise towards the top in per-game production whenever football resumes. That could mean challenging for the top spot in the section as early as this season.

Williams has at least six offers already, primarily Power-5. He forms one of the state’s premier Class of 2023 passing triads with QB Jaden Rashada and WR Israel Polk.

Despite dealing with frequent double and triple coverage, Contreras was one of the section’s top producers at wideout in 2019. He caught for 1,029 yards and 16 touchdowns in just 10 games, and finished the season with a 211-yard playoff effort in which Windsor nearly knocked off eventual Division 3 champ and CIF 3-A state finalist Rancho Cotate. Contreras also is a standout strong safety when asked to line up two ways.

In terms of pure production, Torres is the top returning WR in the section after catching for 1,053 yards and 21 touchdowns in 11 games as a junior. He also brought in over 100 yards each in both punt returns and kick returns. And while it doesn’t impact his ranking here, Torres was a standout defensive back with three picks and 33 tackles for the 11-2 Prospectors.

A 3-star ATH prospect, Kraut picked Arizona out of at least a dozen offers where he will play the rover spot on defense. However, some of his offers came at wideout, and he’s one of the top receivers in NorCal when he’s not anchoring Carrillo’s secondary.

Hearns is heading to Cal next season to play cornerback, but the 3-star prospect is also one of the premier receivers in the section as a Spartan. He caught for 439 yards and two touchdowns last season for the perennial section champ.

A future Colorado Buffalo and 3-star ATH prospect, Reed is a big-time deep threat and the section’s top return specialist. He caught for 661 yards and 10 touchdowns last season, had a 26-yard touchdown run, and had a combined 519 yards and five TDs returning kicks and punts. That puts him at over 1,200 all-purpose yards before even counting 122 yards returning five interceptions (which didn’t factor into our rankings). And he did all that in just nine games.

Despite his outstanding 2019 production, Quesada might still be the top D-I breakout candidate in 2020-21. Last season at Freedom, which went up against some very strong defenses, he caught for 853 yards and eight touchdowns in just 10 games. That included a 150-yard effort against his new team, Pittsburg.

Quesada is nationally-ranked and has received D-I interest, but has no offers yet per 247Sports. That’s very likely to change if he can make noise again this season as part of a stacked Pirates squad.

A 3-star San Diego commit, Heverly caught for 716 yards and six touchdowns in 11 games last season. As strong as those numbers were, they were deflated by sharing targets with another future college WR and coming out early in numerous blowout wins. Heverly was clutch in close games and had his most productive nights against the Dons’ best opponents. Lastly, it won’t affect his ranking here, but he’s also a college-caliber corner.

Nunnally, a 3-star Washington State signee, was a key cog in Cardinal Newman’s 14-1 season and 3-AA state championship. In 10 games, he caught for 770 yards and 10 TDs and ran for 29 yards and two more scores. He did that playing alongside another future D-I receiver a year above him in a balanced offense that spread the production around. Nunnally could easily be a 100-yard or more per game guy if needed, and will get even more opportunities as the WR1 on the top team in the North Bay.

There were several wide receivers in the conversation for our Top 10 who narrowly missed the cut. Here they are: