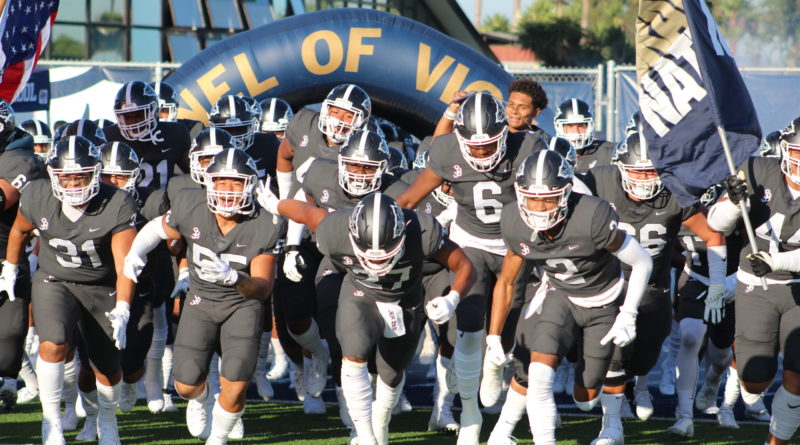 SBLive California is previewing the Top 50 high school football teams in the state ahead of the 2020-2021 season. Here’s an inside look at the St. John Bosco Braves of the CIF Southern Section, the No. 1 team in our countdown.

Coach Negro: “Earnest started last year for us. He’s one of the top offensive lineman recruits in the country. He’ll anchor our offensive line which I think will be the strength of our team.”

Coach Negro: “Max is our left guard. He’s another two year starter who comes back and will bolster our offensive line.”

Coach Negro: “Anton will play at either the guard or the tackle spot. He’s very versatile and will be a strength on our offensive line.”

Coach Negro: “Adam is a returning two year starter at the tight end position. He had a really big postseason for us last year. From the Section semifinals to the CIF state championship, he had three really great games for us to end the season. He can be an end line tight end and also a guy that can play in space. That’s a big advantage for us.

Coach Negro: “Jode is a two year starter who had a really good season for us last year on a team that was loaded with wide receivers. Jode was our third leading receiver a year ago.”

Coach Negro: “We’re going to do a lot differently this year in terms of how we’re going to attack on the offensive side and our running backs will be a big part of that. Rayshon is very talented.”

Coach Negro: “Matayo is probably our most talented defensive lineman. He’ll be playing a dual role for us at defensive end and tight end. He’s super versatile. We can stand him up and play him as an outside linebacker or on the inside in a more physical role. He can play on the left side and on the right side as well. He’s a supreme talent.”

2019 stats: Caught one pass. Made five tackles and recovered a fumble.

Coach Negro: “Jairus is a returning starter for us. He’s a really talented kid who we are excited about.”

Coach Negro: “Nate had a massive year for us last year as a sophomore. He made some huge plays in the Mater Dei finals game and then against De La Salle. He’s a returning All-Trinity League guy.”

Coach Negro: “Benny played a lot of significant snaps last year and his role will increase this season.”

2019 stats: Made four tackles and had an interception.

Coach Negro: “Jalen played a bunch last year as a sophomore. We really like what he’s going to be able to bring to the table.”

Coach Negro: “Tayvion is another really talented guy. He’s a returning starter and is super athletic. He can play on the offensive side of the ball too, but we have a lot of guys over there.”

Coach Negro: “Kyngstonn is a linebacker who will contribute.”

Coach Negro: “Jahlil will be playing corner for us. He’s probably one of the most talented kids in the entire sophomore class. He’s a versatile guy that can play both ways, but right now we’re going to keep him on the defensive side until there’s a need.”

The Braves will have a new starting quarterback this season. Coach Negro must replace last year’s Division 1 Southern Section Player of the Year and current Clemson freshman DJ Uiagalelei.

“The quarterback spot is a position that’s up for grabs,” Negro said. “Right now, I think there are two front runners that have separated themselves a little bit, but then there are other kids that are battling for the spot. The two front runners are probably Pierce Clarkson, who’s a sophomore and junior Katin Houser. The difficult thing is that we haven’t had the chance to evaluate these guys that much. We’ve been very limited in what we can do since March.”

The other QB’s in the hunt are junior Peter Fa’aita, senior Chris Carter and junior Braeden Fuller.

WHO TRANSFERRED OUT OR GRADUATED EARLY?

“I think our kids have shown a lot of resiliency. The kids are certainly staying as motivated as possible. One thing I’m confident in is that this has brought us a little bit closer together. The team chemistry has really started to improve. We’ve done so much work off of the field in terms of building team chemistry because we had to do that. It kept the kids engaged. I give a lot of credit to them for that.

“We’ve gone nearly 30 weeks preparing for a season we don’t know will happen and the kids haven’t deviated a step off the line of our original goal which was to win every game we play. The kids have been incredibly resilient and shown a lot of resolve in terms of how they’ve managed this thing.

“We haven’t had any outbreaks or situation where we needed to shut things down because we had multiple kids test positive. None of that has happened. The reasons why kids have missed due to the pandemic is because of situations that were off of the campus and outside of our school environment. I’m super proud of that. We’re a united group. We’ve built a brotherhood here that the kids can be proud of and want to be a part of. That’s what’s carried us through the last ten months.”

With the Southern Section potentially having to cancel the high school football season due to COVID-19, programs in Southern California are currently devising contingency plans in case they can’t play until the fall. Here’s Negro’s response on what St. John Bosco would do if the season scheduled for the winter/spring was cancelled:

“At St. John Bosco, we’re not going to go against county health regulations in terms of going out and just throwing kids recklessly out on a field that’s not even sanctioned, licensed or supervised in a global pandemic. That’s not something that we’re going to do as a program. We’re not going to send a message to our kids that just because we might disagree with the regulations of the state, it doesn’t necessarily mean that we’re just going to go out there rogue and play football in an unsafe environment.”

“We’re going to wait for the county and the state health departments to let us know when it is safe and what we can do in terms of returning. I think our league is pretty much in alignment with that as well. We have a pretty strong and close-knit group as a league and we’ve had a lot of dialogue between the six teams in the league from the coaches, to the AD’s, to the principals and hopefully we’re going to take a united front.

“If the CIF was to cancel the season and the state health department was to say here’s what needs to happen in order for us to play football, I think our league would be on the forefront of scheduling games and allowing our kids to be able to play.

“But I’m still hopeful. We have over a month before a decision has to be made by the CIF to cancel anything so we’re going to take it day by day.”

The best case scenario for St. John Bosco is to get solid quarterback play from whoever wins the job and then repeat as Southern Section Division 1 champions.

The most realistic scenario for St. John Bosco is to compete with Mater Dei and Servite for a Trinity League championship. Negro alluded to the fact that the Braves offense will look much different this season with a bigger emphasis on the running backs. Without DJ Uiagalelei under center, that makes a lot of sense and that style of offense will still definitely win St. John Bosco a lot of games. The Braves are young and have a different look, but they’re still loaded.

“The expectations for us are to continue the strong legacy we’ve had over the last ten years. The kids know what our expectations are. Our goal is to first try and win a Trinity League title and then get into the playoffs. In this weird 2020-21 season we understand that there probably won’t be playoffs though.

“We have to recalibrate our focus to try and become the best football team that we can in the maybe six or eight weeks that we get to play, but expectations are high. We want to win ever game that we possibly can and be one of the best teams in the Southern Section.

Our team is very hungry. We have a lot of kids who haven’t had the opportunity to play yet and so they’re really looking forward to having the chance to prove how talented they really are. When you have kids that have been itching for an opportunity and itching to get onto the field, they’re going to play at a super high level. These guys are all elite players. They’re guys that want to be great. They want to quickly make a name for themselves because their window is shrinking a little bit and because of that, I think they’re going to come out with their hair on fire.