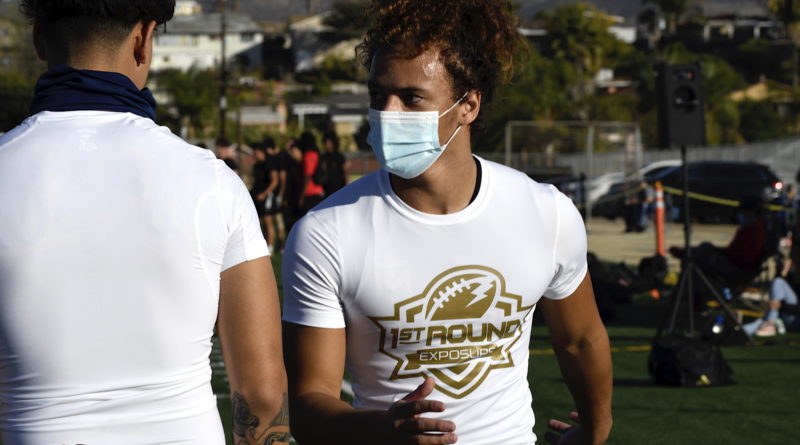 Here’s a closer look at the Top 25 wide receivers in the CIF San Diego Section heading into the 2020-21 season. The rankings were compiled by SBLive reporter Bodie DeSilva.

Miller took a back seat last season as Jahiem Allen-Pompey put up historic numbers for the Matadors, but still had a strong junior campaign. He finished the year with 48 catches for 624 yards and three touchdowns.

Johnson was an important weapon for the Braves in 2019, catching four touchdown passes and averaging 15 yards per catch. Johnson also scored twice on the ground while averaging six yards per carry. He signed with Black Hills State in February.

Pearson led the league champion Aztecs in receiving yards with 578 in 2019 and caught five touchdown passes. He added 27 tackles and two sacks on the defensive side and is signed to Concordia Chicago.

Romero was part of an excellent receiving trio for the Crusaders alongside Darren Barkins and Jessie Campbell. He led Mater Dei Catholic with 22 catches and also had 369 receiving yards and five touchdowns. Romero signed with Concordia St. Paul.

Blackford plays a key role for the Eagles on both sides of the ball. He caught seven touchdowns as a junior and scored twice more on the ground. Blackford also had two interceptions last season, giving him 12 over his varsity career. He’s committed to Taylor University.

The Titans only threw the ball 11 times per game in 2019 but when they did, they often looked towards the sophomore wideout. Blondin finished the season with 13 catches for 204 yards and three touchdowns and is sure to see his workload increase over the next couple of seasons.

Peterson was one of several key offensive pieces for the Conquistadors during their 2019 CIF Championship run. He had 488 receiving yards and six touchdowns as a junior and has 20 total touchdowns over the past two seasons.

After a solid sophomore season, King took a big step forward and caught eight touchdowns for the Aztecs while averaging 15 yards per catch. He showed his versatility with 25 tackles and three interceptions on the defensive side of the ball. King signed with Idaho in December.

Donnell is one of the toughest covers out of the slot in San Diego and was arguably the top special teams’ player in the section last season as he returned five punts last season for touchdowns.

In the Dons run-heavy offense, Smith provided them with a reliable pass catcher in 2019. He finished the year with 444 receiving yards and ended up in the end zone on six of his 19 receptions. Smith committed to the University of Chicago in January.

Williams caught 18 passes for the Pirates during their CIF Championship run in 2019 and is one of San Diego’s higher upside prospects with his 6-foot-5 frame. Offers have come in from Montana and South Dakota.

Evans burst onto the scene in 2019 as the Marauders leading receiver. He caught 33 passes for 461 yards and four touchdowns and has since seen offers come in from Fresno State and Utah State.

Paggett posted impressive numbers during his junior season at Kearny, catching 20 passes for 540 yards and four touchdowns in only seven games. He signed with Nevada in December and has transferred to Lincoln for his senior season.

Koyl-Fleming had a dominant season for Kearny in 2019, totaling 52 catches for 746 yards and four touchdowns. He’s transferred to Serra for his senior year where he’ll give the Conquistadors another talented offensive weapon.

Brooks made the most of his six games during the 2019 season, finishing with 504 receiving yards and seven touchdown catches while averaging over 33 yards per catch. He showcased himself as one of San Diego’s top receivers after the catch and is set up for a big senior season.

Campbell picked up football as a junior after focusing on basketball during the early part of his high school career and quickly made his mark. He caught 19 passes for 397 yards and four touchdowns for the Crusaders. He signed with Southern Utah earlier this month.

Solis transitioned over to wide receiver as a junior after playing quarterback the season before. He immediately showed off his skills, catching 45 passes for 601 yards and five touchdowns as he played a key role in the Vikings’ CIF Division 3 Championship run. Solis signed with the University of Chicago, where he’ll join his older brother Gabe as a receiver for the Maroons.

Rosenberg had a huge season in 2019 catching passes from San Diego’s leading passer, EJ Kreutzmann. He finished the year with 105 catches for 1,542 yards and 17 touchdowns. He’s committed to Claremont McKenna College.

Williams did a little of everything last season at Rancho Bernardo, playing both sides of the ball as well as serving as the punt and kick returner. He finished his junior campaign with 47 catches, 723 yards, and four touchdowns on offense while adding 47 tackles and five interceptions on defense. Williams signed with Idaho in December and will play his senior season at Lincoln High School.

Jefferson has had bad luck with injuries over the past two seasons that have limited him to 12 games but has provided glimpses of skill and athletic ability. He’s totaled 11 touchdowns for the Titans and is one of several players in San Diego poised for a breakout senior season.

Beachem is a physically imposing pass catcher that can line up at receiver and tight end with his size (6-foot-5, 225 pounds). He caught 34 passes last season for the Pirates to go along with 551 receiving yards and three touchdowns. Beachem was committed to Arizona State before opening up his recruitment in January.

Petry saw time on both sides of the ball and even played some quarterback during his three seasons at The Bishop’s School. He took the next step as a junior finishing with 1,204 receiving yards and 14 touchdowns. He’s transferred to Helix High School for his final season and committed to The University of Pennsylvania in December.

One of the best athletes in San Diego, Jessie jumped onto the map last season after catching 65 passes for 972 yards and 16 touchdowns for the Patriots. He’s signed with New Mexico.

A candidate for San Diego’s fastest player, Tucker is arguably the top two-way player in the section. He caught 17 passes for 440 yards and five touchdowns during his sophomore season at St. Augustine and added four interceptions and two forced fumbles on defense. Tucker has offers from nearly all of the Pac-12 schools as well as several other schools nationally and has transferred to Lincoln High School.

Meredith saw time at both running back and receiver last year playing in Valhalla’s run-heavy offense, totaling 390 yards and three touchdowns over six games. He’s spending his senior season at Mater Dei Catholic where he should post huge numbers in the Crusaders’ high-octane offense. Meredith signed with Washington State in December.

Several wide receivers were considered for our Top 25, but narrowly missed the cut. Here are honorable San Diego Section WRs who were in the conversation: