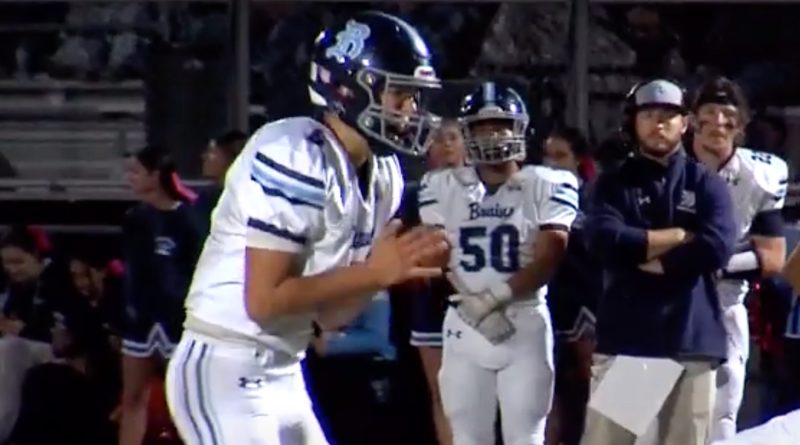 Here’s a closer look at the Top 10 quarterbacks in the CIF Central Coast Section. The rankings were compiled by SBLive reporter Bodie DeSilva.

Rampelburg backed up two-year starter Cory Taylor last season for the Warriors. Should the football season begin, Rampelburg will have the chance to be QB1 for one California’s top teams.

Peters stepped in for the Vikings as a sophomore, leading them to a 7-5 record and a berth in the CIF Semifinals in his first season as a starter. He completed the season with 16 passing touchdowns and over 1,200 yards through the air.

Purcell had a great debut season for Sacred Heart Prep as a junior, leading them to an 8-4 record before falling to eventual champion Los Gatos. He had over 1,400 passing and tossed 14 touchdowns while completing 66% of his passes.

Miller helped lead the Eagles to an undefeated league championship and a berth in the CIF Division 2 Championship game as a junior. He finished the season with 14 touchdown passes to only four interceptions and added four scores on the ground.

Gonzalez finished off his sophomore season with a five-touchdown performance that helped him as he moved into the starting role as a junior in 2019. Gonzalez led the Knights to a one-point win over Terra Nova in the CIF Division 3 Championship, getting redemption after an early-season loss to the Tigers. He finished the season with 17 touchdown passes and over 1,700 yards.

In his first year as the starter, Moffitt led the Cougars to a 10-1 record and showcased his dual-threat abilities. He finished his sophomore season with 11 touchdown passes and only three interceptions to go along 514 rushing yards and 11 scores on the ground.

Lampkin began the 2019 season as the backup for Arizona State-signee Daylin McLemore but was forced to step in following McLemore’s mid-season injury. He was able to showcase his skillset, passing for eight touchdowns and rushing for four. His first offer, from Illinois State, arrived earlier this month.

MacLeod was extremely efficient in his first season under center for the Bears, passing for 19 touchdowns and over 1,800 yards while only throwing two interceptions. MacLeod’s success should continue with standout wide receiver Jalen Moss returning alongside him.

Ojeda was one of the Central Coast Section’s leading rushers despite taking his snaps at quarterback. He made plays for the Acorns all season, finishing with 17 touchdown passes as well as 1,200 rushing yards and 16 touchdowns on the ground.

Bandanza started at quarterback for the Bruins as a sophomore and took a big step forward during his junior campaign. In 2019 he helped Branham to an 11-2 record that included an overtime loss to Milpitas in the CIF Division 4 Championship game, finishing the season with 22 touchdown passes, 678 rushing yards, and seven rushing touchdowns.