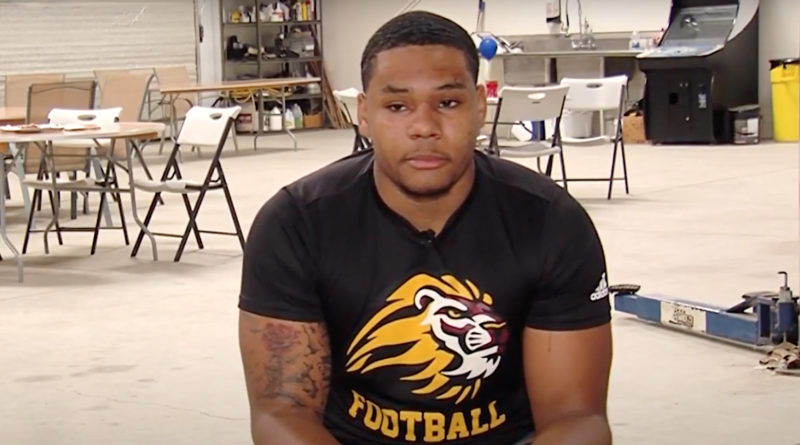 Editor’s note: This is the latest in a regular series of stories from 49ers Cal-Hi Sports that highlights high school student-athletes across Northern California.

Akili Calhoun finished his last high school class in December, and he couldn’t be happier.

“It feels great because I am completely burned out by school,” an excited Calhoun told 49ers Cal-Hi Sports. “Give me a month and I’ll be all right.”

Calhoun, a star defensive end for Liberty (Brentwood), is set to play football next season at the University of California-Berkeley. He put in a ton of extra time in the classroom so he could graduate early from Liberty and start classes at Cal in January.

“UC Berkeley, you can’t beat the education there,” Calhoun said. “On top of that my family has been through a lot, so checking in on my mom and my younger siblings has always been important to me.”

Calhoun has gone through a tough couple of years as he studied hard, played football and dealt with tragedy in his life. His parents split up, with his dad leaving. During the same time his grandmother passed away and friends also died.

“There were a whole lot of days when I went to school crying,” Calhoun said. “My sophomore and junior years I went through horrible depression. I ended up cutting off everybody around me. The only people that helped me through it were my coaches.”

“At lunch, after school or before practice he would come in and we would reset his mind and get him on track,” said Liberty head coach Ryan Partridge. “He had a lot of deaths in his families and deaths of his friends throughout his high school career. It was like bang, bang, bang, bang.”

It was those talks with Partridge and the games for Liberty that kept Calhoun moving forward. He continued to grow in size and as a football player. Coach Partridge praised his understanding of the game and his dedication to the sport.

Calhoun grew into one of the top defensive linemen in the country. He chose Cal for the education but also to stay close to home where his family could see him play.

He stepped onto the Cal campus in mid-January to start on a path he hopes will take him to the NFL. Calhoun did very well in his classes at Liberty and knows the Berkeley education will last a lifetime. But first he wants to see where football can take him.

“I’ve never really had money,” Calhoun said. “I live in a two-bedroom, two-bath apartment. We have three mattresses on the floor. I don’t even know what it’s like to sleep on a regular bed. It eats me up inside to know my family has to live like that.”