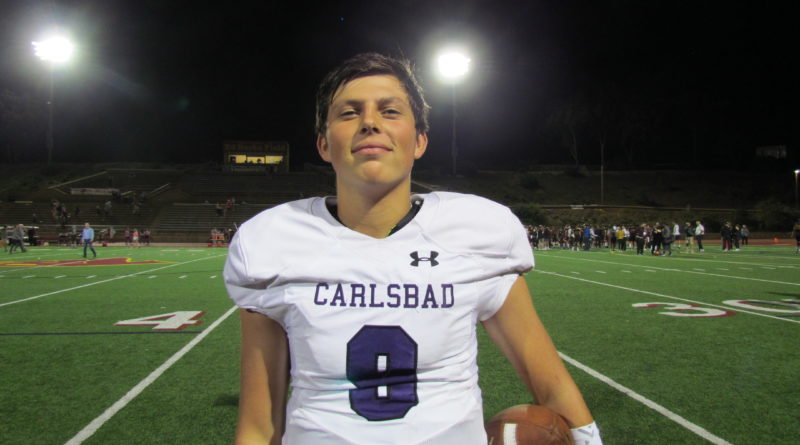 Here’s a closer look at the Top 20 quarterbacks in the CIF San Diego Section. The rankings were compiled by SBLive reporter Bodie De Silva.

There are two Class of 2021 QBs who would have been ranked near the top, but have decided to graduate and enroll early in college. Here are the two early enrollees:

Here are the Top 20 quarterbacks in the CIF San Diego Section scheduled to compete if there is a 2020-2021 season.

Villalobos threw 25 touchdown passes last season and only four interceptions. He has transferred to Valley Center for his senior season.

Luong enters his third season under center for the Colts. He’s up to 21 scholarship offers after throwing for nine touchdowns and rushing for six during his junior season.

Sayin has picked up offers from Florida State, Florida Atlantic, and San Jose State before taking his first high school snap. He’ll back up older brother Aidan for the Lancers this season.

Ramos had an excellent junior season, showing off his rushing skills and ability to throw on the run. He finished the year with 17 touchdown passes and five scores on the ground.

Bennett threw for 10 touchdowns as a junior in a run-first offense that finished the year with over 4,500 yards on the ground. He’ll have a bigger opportunity as a senior with the Panthers’ top three rushers having graduated.

Reid stepped in as the Wildcats’ starter late in the season and helped jump-start El Camino’s offense. The Wildcats averaged over 43 points per game during their final seven games including a 75-point effort in the CIF Division Two Championship game.

Krug threw seven touchdown passes and only two interceptions in 186 attempts last season. He was able to showcase his rushing ability, finishing with 931 yards and 13 touchdowns on the ground.

Cooper saw limited time as a freshman with the Hornets utilizing three quarterbacks. He finished with one passing touchdown and four rushing touchdowns and figures to lead a high-powered Lincoln attack over the next three seasons.

Laverdiere’s junior season flew under the radar despite finishing with 50 total touchdowns — 32 through the air and 18 on the ground. He enters his final season already in the top 15 on San Diego’s all-time passing touchdown leaders list with 59.

Orsborn burst onto the scene in 2019, leading the Buccaneers to a six-win season after they’d won a combined two games over the prior two seasons. He finished his sophomore year with 22 touchdowns and over 2,000 passing yards.

Mirer took over for the injured DJ Ralph against St. Augustine last season and led the Dons to a comeback win in the rivalry game. He started the final two games of the season for the Dons and provided a glimpse of what earned him an offer from Michigan in the offseason.

Taumoepeau showed a lot of improvement during his junior season, throwing for 15 touchdowns and capping the year with a 537-yard passing game against Central in the playoffs. He also added 318 rushing yards and three touchdowns on the ground. Idaho and Valparaiso are among his offers so far.

Harris threw for 19 touchdowns and nearly 2,500 yards as he led the Pirates to a CIF Championship and into the CIF State playoffs.

“The biggest part is he’s grown mentally and emotionally which is exciting from the quarterback position,” Oceanside Head Coach David Rodriguez said about his quarterback.

In his first season as the starter, Stratton’s play improved as the season went along, culminating in a CIF Division 3 Championship over previously unbeaten Scripps Ranch. His first offer has arrived from Columbia.

Colmenero passed for 24 touchdowns during his sophomore season at Eastlake before transferring to St. Augustine last season. He split time as the Saints quarterback last year, throwing 15 touchdowns and is poised for a big senior season as the established starter.

Durkin led a high-powered Scripps Ranch offense to a 12-0 start last season before falling to La Jolla in the Division 3 championship game. He tossed 20 touchdowns and added six more scores on the ground. He signed with Davidson in December.

Appleman was extremely efficient during his junior campaign, tossing 25 touchdown passes to only three interceptions. With nearly every receiver returning for the Crusaders, he’s poised for a huge senior season. Appelman signed with New Mexico State in December.

McComb carried the Eagles’ offense during his junior season. He passed for 2,691 yards and 24 touchdowns, while also leading Granite Hills in rushing with 494 yards and seven touchdowns. He is committed to Southwest Minnesota State.

Sayin passed for over 2,300 yards and had 24 touchdowns last season as he led the Lancers to an undefeated Avocado League Championship and an appearance in the San Diego Open Division Championship game. Sayin committed to the University of Pennsylvania in September.