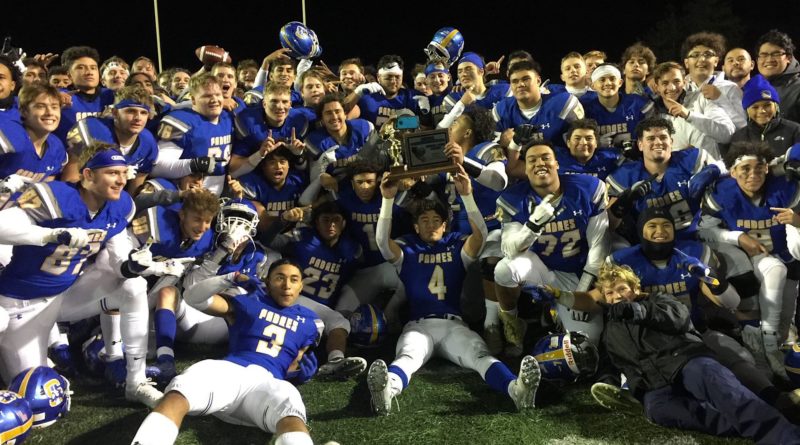 SBLive California is previewing the Top 50 high school football teams in the state ahead of the 2020-2021 season. Even with the season on hold, we will continue to highlight the best teams, players and coaches in California. Here’s an inside look at the Serra Padres of the CIF Central Coast Section, the No. 8 team in our countdown.

A 6-5, 230-pound 3-star TE, Pedersen had six catches for 84 yards and a touchdown in 2019. He signed with Louisville over more than 20 schools to offer him, and is likely to become a featured receiving target in his last year of high school ball.

Lampkin is listed on 247Sports as a 3-star ATH prospect, but if 2019 was any indication, his future might be solely under center. He stepped in for injured 3-star senior Daylin McLemore (now at Arizona State) late in the regular season, and the Padres did not miss a beat. In Serra’s final six games of the season, Lampkin threw for 734 yards and eight touchdowns on over 70% completion. He also ran for 448 yards and four touchdowns on over six yards per carry for the season.

In addition to helping lead the Padres to a Central Coast Section Division 1 championship and state semifinal victory, he also led what was nearly a comeback for the ages in the state championship game against Corona del Mar. Checking in for an injured McLemore down 35-14 with just over five minutes left (3:59 in the video), Lampkin led the offense to two touchdowns to make it 35-27, and a third drive down the field that very nearly resulted in a third touchdown as time expired. He has the potential to break out as the best quarterback in NorCal as an upperclassman.

They don’t call him “the Missil3” for nothing – Mahasin has six offers, including from the Pac-12, and is a 3-star prospect. An all-league returner, he ran for 434 yards and five touchdowns as a sophomore, and caught for 292 yards and three touchdowns.

Another all-league returner, Poni was Serra’s leading rusher last season with 489 yards on the ground, plus five touchdowns. He also proved to be a legit pass-catching threat, finishing with 14 receptions for 133 yards and a TD.

Serra’s third and final all-league returner, Helu is both a force on the O-line and a 3-star DT with 10 offers. He stands upwards of 6-foot-3 and 315 pounds, and had 21 tackles, two tackles for loss, and three sacks in 2019.

A nationally ranked prospect awaiting his first D-1 offer, Williams led the Padres with 71 tackles last season. He was also second in tackles for loss with five.

Myers received limited action as a junior, making nine tackles, a tackle for loss, and two sacks in five games. However, the Oberlin commit is likely to be a key contributor on defense if he has a senior season.

Serra’s top sophomore on defense last season, Stewart was in the mix at safety in some big games and recorded 33 tackles (three for loss).

Neither Bey nor Niu have played a down of high school football yet, but both have offers from Arizona State already, so it’s safe to say they’ll be impact players.

Long snappers just about never make the “players to watch” list, but 247Sports ranks Fadelli as the fourth best LS prospect in the Class of 2021. He’s received at least one college offer.

HOW COVID-19 HAS AFFECTED SERRA FOOTBALL

“The pandemic impacted Serra football in a big way, but it didn’t stop us from working and striving to get better. We are very dedicated and ready for whatever type of season we have. The thing we have done to adapt is to be spaced out at practice in different groups.”

Even without any returning all-league first or second teamers, Serra is once again a Central Coast Section favorite. There are certainly a few other major contenders who could knock the Padres off – league foe Valley Christian is likely their top threat – but their best-case scenario would be winning a Division 1 championship with room to spare.

Additionally, last season, Serra would’ve had a good chance to be in overtime of the CIF 1-A state championship if there was another minute left in the game against Corona del Mar. It’s impossible to set any state playoffs-related goals right now regarding the 2020-21 season, but the Padres could plausibly avenge last year’s disappointing end to an amazing run in whatever bowl games they are given.

Anything less than contention for a section championship would be surprising. Serra is returning a few key personnel from last year’s strong defensive showing, and has the offensive firepower to be even better on offense. This squad should look the part of – at minimum – a CIFCCS Division 1 semifinalist from season start to season end, and will likely wind up in the championship game.

“It gives us momentum and it makes us even more hungry because we lost,” said Lampkin about the loss to Corona del Mar in the state championship game.

“We wish to redeem ourselves and finish the season right. For me, starting in the playoffs I was very nervous at first, but as I kept playing I started to get more and more comfortable with the system and the team.

“Our identity is a tough, hardworking and dedicated team. The thing that makes Serra football special is the brotherhood at our school. We work together as a team and go hard in everything we do.”