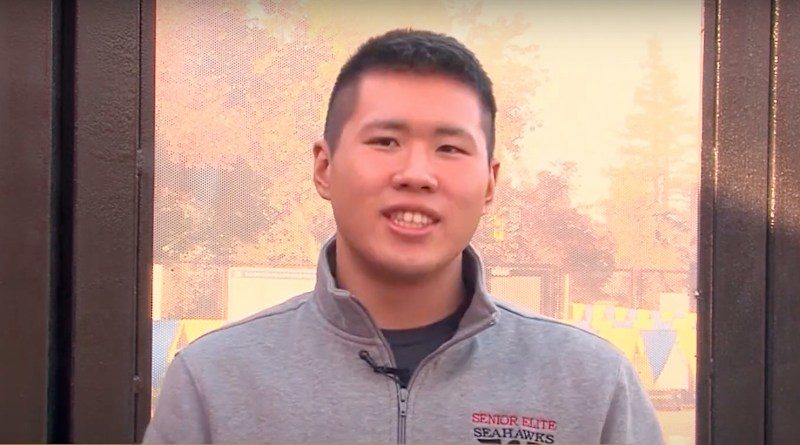 Editor’s note: This is the latest in a regular series of stories from 49ers Cal-Hi Sports that highlights high school student-athletes across Northern California.

Swimming long distances is the greatest joy in Andrew Wang’s life. His favorite event is the mile, which he thinks is so much better than the sprints.

“Sprinters – I don’t want to offend anyone – they just kind of ‘go’ I guess,” said Wang. “For me it’s a very strategic sport, because with the mile you can’t just go all out. You have to think about it.”

Being strategic is a big part of Wang’s life. The Dublin High School senior has a 4.5 GPA and scholarship offers from a variety of top colleges, including Harvard.

But in thinking about it, Wang says he decided on a character move, not just a scholastic move. He turned down Harvard and other Ivy League schools and decided to join the Army.

Wang will attend West Point in the fall and swim for his country.

“That’s what West Point is known for, building character and building who they are, becoming leaders of society,” Wang said. “And that’s something I value as a person.”

Wang will enter West Point and compete equally with the current swim team members. His mile times are among the best in the North Coast Section. He is hoping there will be a swim season this spring so he can compete for a section title before joining the Army.

Wang is Co-President of an organization called PLAY (Promoting Leadership and Aspiring Youth) that mentors young people in the area of their expertise. For Wang, that means engineering and sports. For others it might be instrumental music.

Part of the goal of PLAY is having teenagers realize the value of volunteer work. They take up community projects where they see a need, including serving Thanksgiving dinners at local senior centers. This past year they gathered a variety of personal protective equipment and delivered them to hospitals.

Wang’s dedication to his swimming and to his community is what makes him who he is. The decision to attend West Point makes much more sense who you see the person he is today and the young man he strives to become.

“My goal in joining the Military Academy is to become the best swimmer I can become. Kind of grind out points for them, try to work hard for them and to make sure that I as a person can help the team atmosphere, the team environment,” Wang explained. “I try to build positivity.”

Wang is not set yet on a major in college. He’s leaning toward Medicinal Biology. He’s a native of Albany, New York, so going back to his home state will be familiar for him.

The military is a huge commitment with many years committed after college to serving his country. It’s a commitment Wang has taken with enthusiasm knowing it will help him continue building character. Until then he swims lap after lap, strategically planning his race just as he is planning his life.