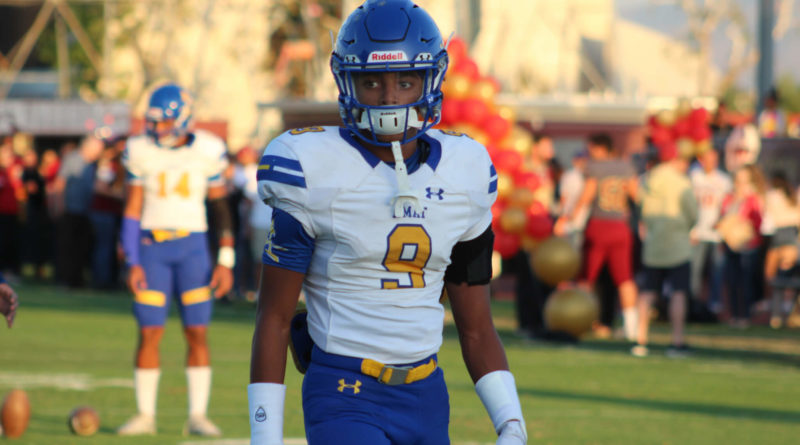 SBLive California is previewing the Top 50 high school football teams in the state ahead of the 2020-2021 season. Even with the season on hold, we will continue to highlight the best teams, players and coaches in California. Here’s an inside look at the Bishop Amat Lancers of the CIF Southern Section, the No. 12 team in our countdown.

Coach Hagerty: “Dyson is definitely a guy that is coming on very strong. Towards the middle to the end of last year he definitely got recognized. I was at Bishop Amat when Dyson’s father Daylon McCutcheon played and when Daylon broke onto the scene he was a lot further along. Dyson is just starting to stumble upon his super powers. So I’m really hoping that he gets a chance to play this year because I feel like he’s a kid that’s just realizing he’s an alpha male out there. He’s put on 20 pounds of weight in the offseason. If he plays this year he’ll do a lot of things that we knew he could do, but maybe he didn’t know. He’d be playing this year with a lot more confidence and a lot higher expectations.”

2019 stats: One rushing TD, 32 tackles on defense, one interception, one blocked field goal

Coach Hagerty: “Tobin is going to be a really, really good one. He’s gotten bigger and stronger and he moves really well. He learned a lot last year as a sophomore. His arm got stronger and he’s gotten faster. He knows our offense. He’s what every coach hopes for in their quarterback.”

Coach Hagerty: “Martin is probably our best guy up front even though we have some really good younger players there too. Martin will play nose guard for us. He’s bigger and stronger and we’re really looking forward to seeing what he’s going to do for us.”

2019 stats: Had a sack last year against Chino Hills

Coach Hagerty: “Ryan is a strong safety and linebacker hybrid. He can cover and he can blitz. He started last year and has had a good offseason. He’s stronger and more confident. I’m excited about him.”

Coach Hagerty: “Adrian gets overlooked. He’s a real weapon for us. This will be his third year with us. He punts and kicks. He was a little inconsistent last year, but he’s really worked hard at becoming more consistent. He’s the best kicker I’ve had in 13 years here. We’re excited about our special teams. We have a really solid long snapper and a holder who work very hard. That can really make a difference in games. Adrian was also four out of five last year on onside kicks. He places them so well.”

Coach Hagerty: “Donavan is a kid who I wish I could clone. He just does everything you ask him to do. He may not be the most physically gifted kid, but he outplays people and he’s a great blocker. He has good hands and runs good routes. He excels in the classroom too. You could sit down with him and have an adult conversation on just about anything. He’s just a really good kid who is a pleasure to coach. He’s like a coach out there on the field. He’s a big part of our offense.”

“We stayed away from practicing over Christmas, which seems like a good thing because some kids may have been exposed to COVID so they’ll get tested. We also have a couple of kids playing club football so they know they can’t practice with us and play that simultaneously, so they’ll stay away from our conditioning if they’re doing that. That’s the world we live in.

“The pandemic has kept us from doing what we do best which is establishing a brotherhood and getting kids to play for each other. It’s tough to cultivate an environment with the restrictions we have right now. Our strength as a team is to get the kids to play together. We want them to have a sense of we’re in this all together. We’re not the most talented, but I think we get a lot out of the kids.

“I feel bad for the kids because I know some of them are struggling. Some have texted me and talked to me on the phone saying how maybe they don’t want to play this year. It’s coming from kids who are usually pretty solid about their commitment and what they want to do. Stuff like that is usually uncommon with our kids. A lot of them are starting to doubt if this is all worth it. We’re trying to keep them up and we’re still going. We’re also following all of the rules, I can tell you that.

“In terms of kids potentially opting out, Dyson McCutcheon may be on the fence right now before heading to Washington in the fall. His dad and I talked and at one point it was a possibility he may not play, but that was a while ago and we haven’t revisited it. I don’t know exactly what’s going to happen right now, but we’ll see. I hope we have some kind of a season and he’s a part of it.”

Bishop Amat is 10-0 in the Mission League over the last two seasons. Their best case scenario is winning the league again and qualifying for the Division 1 playoffs.

The most realistic scenario is to hopefully have some sort of season and be competitive in every game. Replacing All-Section running back Damien Moore will be challenging, but between quarterback Tobin O’Dell and cornerback Dyson McCutcheon (hopefully) coming back, the Lancers return enough talent to still be very dangerous.

“I really like our group. I think we have a really good team. It’s a great blend of new and experienced players. I think our wide receivers are going to be really strong. I think offensively we’ll be able to run with our running back and our quarterback. Besides St. John Bosco and Mater Dei, most coaches always wonder about their offensive line. Some years you get returners and some years you don’t. We have one returner this year.

“I think defensively we’re going to be pretty big up front. We return a couple corners in the secondary and our safeties are going to be good. We bring back two of our better linebackers too, so I think we’re going to challenge for a league title.”

“Whether we’d be placed in Division 1 or 2 for the postseason, I think we’re in a spot where we wouldn’t go one and out although it’s hard in Division 1, which we know all about. If you’re seven or eight in that Division, which is where we usually fall, you’re going to get St. John Bosco or Mater Dei and that’s always a tough challenge. After them, I think we’re competitive with everybody else.”

“We’ve got some new kids coming up that are pretty talented that look like they’ll start. We’ll probably start five or six sophomores from that group. I really hope we get a chance to play.”