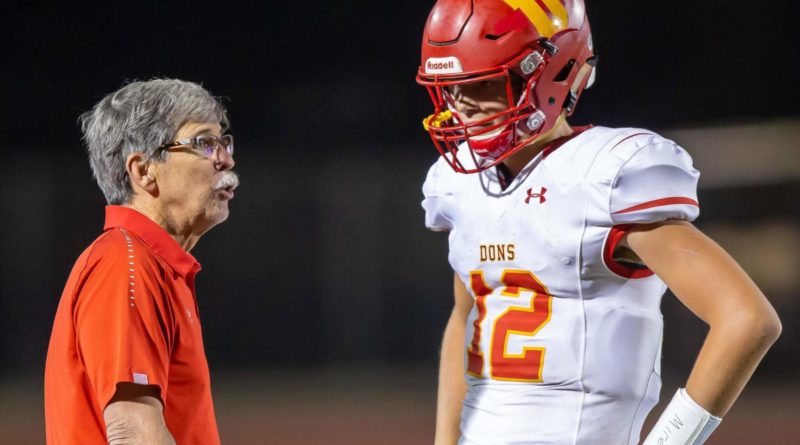 SBLive California is previewing the Top 50 high school football teams in the state ahead of the 2020-2021 season. Even with the season on hold, we will continue to highlight the best teams, players and coaches in California. Here’s an inside look at the Cathedral Catholic Dons of the CIF San Diego Section, the No. 17 team in our countdown.

Junior Charlie Mirer played in three games, making two starts last year when Ralph went down with a season ending injury. He’s battling for the starting job with senior Luke Scornavacco, who transferred back in from San Clemente after beginning his high school career with the Dons.

“Our off-season program, whether it’s COVID-19 or not, is in full swing all the time. We lift in the off season before school because we don’t have that zero period or seventh period PE option with the religion component that we have. Our kids are pretty dedicated from the week after we finish the previous season. It may be helping some schools that don’t have that program instilled into their community but it’s really been business as usual for us.”

“We have been able to get kids together on campus because we’re in a hybrid model so half our kids are on campus everyday. Our football program is split into two cohorts so the kids that are on campus lift after school, but they never inter-mix. Even when they’re at school they’re separated in small pods so we really haven’t been able to do seven on seven or any team stuff because the kids are so disjointed all over the place.

“It’s been hard to kind of organize everybody and I think that’s gonna show if and when we get a football season going. I think it’s gonna be a mess. I told Coach Doyle when all of us coaches were trying to get a start date, just give us two weeks, give us ten days just to get out and play. We may be sloppy, but I think within two weeks we could be ready to play anybody to some degree. Football has changed. It’s really year-round for the teams that are in the top ten at least.”

The Dons have loads of talent and the looks of a top five team in the San Diego Section. Getting quality quarterback play and being able to replace several key losses on the offensive line will likely determine their ability to compete for an Open Division championship.

Cathedral Catholic has experience and talent at every level of the defense and features a great running back duo in Christian Hall and Lucky Sutton. The Dons should be an Open Division team and should see a lot of competition along the way in the highly competitive Western League.

“I think we’re going to be skilled on the offensive skill positions with Christian Hall and I don’t even know if he’s a sleeper anymore, but Lucky Sutton probably should have gotten some more carries last year, but is next in line for a Dons future star running back.”

“Defensively we’re gonna be relatively young but I think we’ll be surprisingly tough especially our front seven. We have two returners in the secondary in Malachi Williams and Dee’Shon Swafford, who in my opinion are two of the better secondary guys in the county. I think they get less publicity and I think they go a little unnoticed.”

“We’ve got some pieces to the puzzle, it’s just a matter of how quickly can we get continuity. We’re typically that no-name defense. We profess to the kids we don’t need that superstar, we just need eleven guys that are gonna get to the ball really fast and play that punishing style of defense.”