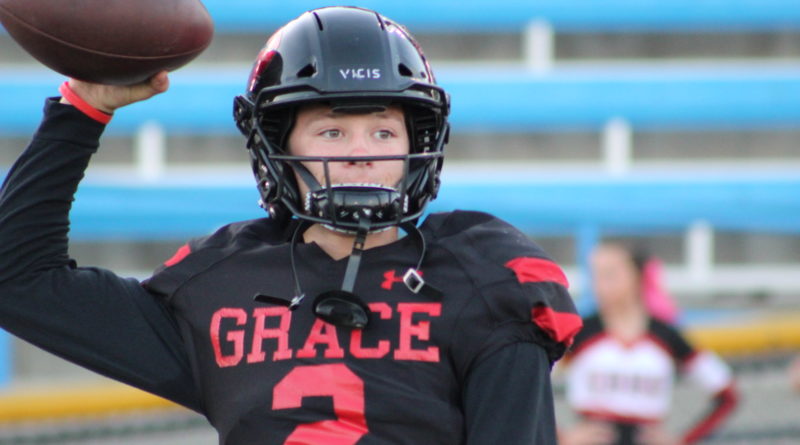 SBLive California is previewing the Top 50 high school football teams in the state ahead of the 2020-2021 season. Even with the season on hold, we will continue to highlight the best teams, players and coaches in California. Here’s an inside look at the Grace Brethren Lancers of the CIF Southern Section, the No. 19 team in our countdown.

Coach Henderson: “Mikey’s put on a lot of weight since last year. He’s got more victories than probably any quarterback in the state. He’s a true winner. I think he’s one of the more underrated quarterbacks in the state. I really want him to be able to play his senior year because people have only seen glimpses of his athletic potential, but they have seen his warrior spirit, courage and play-making ability. We’re really excited about Mikey.”

Coach Henderson: “Julien is an athlete, a gentleman and a scholar. He’s a great athlete that fits the Ivy League mold. He’s a pleasure to coach and he has a wonderful presence about himself. He’s the guy that our team is privileged to have not only because of his talent, but because of what he brings to the team off the field. He’s a very special kid.”

Coach Henderson: “Isaac is a coach’s dream. He’s a three year starter for us who made a transition from safety to linebacker. He loves the weight room and was the defensive MVP of our league last year. He always wants to get better. He’s a very aggressive and intelligent kid, but what sets him apart is his drive. It’s tremendous. He’s benching 365 pounds in high school. He’s talented, but it’s all self-made.”

Coach Henderson: “We feel like our linebacking corps is the heartbeat of our team and Carson is a big part of that. He is a real team player who is also benching 365 pounds. Carson is as good as any defensive player on our team. Last year he didn’t start at linebacker because we needed him on the offensive line and at fullback. He slotted in at linebacker, which is his position of preference, but played on offense with pride. Not once did he come to us and ask about linebacker even though we knew that was his passion. He’s a guy whose gone all in for the team. He’ll have his opportunity this year.”

Coach Henderson: “Cooper’s brother is at Iowa State and was a big-time standout for us. Cooper is a tremendous talent. He started at outside linebacker for us last year and led us in tackles. He has a tremendous energy and nose for the football. He’s gotten bigger, faster and stronger this offseason. Cooper is a great player who represents our brand well.”

Coach Henderson: “Dez is our defensive coordinator’s son. He started for us last year at linebacker. He’s a very physical player who can step up and do a great job on pass rush. He’s a gentleman too. The four linebackers that I’ve mentioned represent our brand of football very well. They’re very respectful young men who do well in school. They’re young men you’d be glad if your daughter brought them home to meet your family. You can trust these guys.”

Coach Henderson: “The stat sheet doesn’t show exactly how good Luke is for us. He’s grown up a ton and has put on a lot of weight. He’s a kid to keep an eye on. He’ll play some running back this year too for us in addition to the receiver and defensive back spots.”

“This has been very hard on young people in general in terms of mental health. Our school has done an excellent job of handling this crisis, but it’s still a tremendous stress on these young people. I give our young men, as a group, an ‘A.’ Our goal when this started was to lead through the storm and as a Christian program, we knew that storms come and go, but that doesn’t mean they’re easy.”

“Some of our guys have definitely had some tough trials during this time. Academically, this has been tough as well. The rigors of a private school online is very challenging. Our kids have had expectations of having a Homecoming game, their first day of school as a senior or a freshman, and it just hasn’t happened. There’s a lack of social interaction so I think there is a lot of disappointment out there.

“We’re really trying to teach our kids self-management to help them stay on the right path. Overall, it’s been quite challenging.”

Henderson and co. are ready to take on the challenge of the Marmonte League this season.

Even if league play is limited, look out for Grace Brethren to be in every game they play in 2021. Henderson’s team has a strong senior class led by a great QB/RB tandem in Mikey Zele and Julien Stokes. The Lancers have had an incredible rise from being a competitive team in the lower divisions of the Southern Section to becoming one of the state’s best squads.

In a normal year, Grace Brethren would be in the hunt for a Southern Section championship.

If football is played, Grace Brethren will most likely play exclusively against teams in Ventura County. The Lancers are the best team in the County, so expect them to win a lot of games.

“We’ve had such a rise and I think this group of seniors has so many contributors, which has helped so much. We have 19 seniors, which after losing so many guys from last year’s roster, a lot of these guys will start for the first time. So in spite of some of our success there’s a hunger underneath. We’re not as big as we’ve been, but we are very strong.

“I think our guys have done a tremendous job of being leaders through this storm and staying faithful and process oriented. We have record breaking numbers in the weight room. We have wide receivers squatting over 400 pounds and benching over 300 pounds.

“We’ve lifted and practiced consistently right up until the Christmas break. This team has resolve and it has hunger. We are very excited to coach this football team. They’ve showed a lot of passion and commitment. They’ve taken a lot from the previous senior classes and have grown from that. We really push senior leadership and this group is ready for their opportunity.

“Our primary goal is to win the Marmonte League, but we know that may not be possible this year due to the pandemic. We’ve really had a tremendous rise from starting in the Frontier League, the small schools league in Ventura County, to now being in the Marmonte League. We’ve won six straight league championships between our time in the Frontier League, Tri-Valley League and Camino League and we want to keep that going. That’s always been the goal for us coming into this season.”