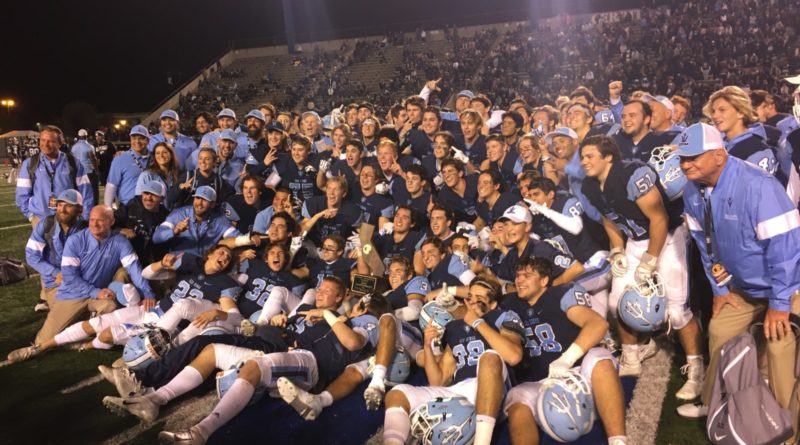 SBLive California is previewing the Top 50 high school football teams in the state ahead of the 2020-2021 season. Even with the season on hold, we will continue to highlight the best teams, players and coaches in California. Here’s an inside look at the Corona del Mar Sea Kings of the CIF Southern Section, the No. 27 team in our countdown.

The 3-star Cal Poly commit was one of the anchors of an elite CdM secondary last season, and secured the Sea Kings’ state championship with a cold-blooded interception in the waning seconds of the game. He finished 2019 with 64 tackles, 4.5 tackles for loss, and three picks.

Another nationally-ranked Cal Poly commit, Bouda was a workhorse on the offensive line last season, and added 28 tackles, 11 TFLs, and 6.5 sacks on defense.

Yet another nationally-ranked Cal Poly commit, Trachtman is another O-line anchor who can play both guard and tackle.

The 3-star Harvard commit is in the discussion of the best blocking tight end in SoCal, and is also likely to see an increase in targets as a senior.

Salmon already has a Power-5 offer (Maryland) before taking the field as an upperclassman. He didn’t get much action as a sophomore, but is a big-time breakout candidate this season.

Vicencio figures to be CdM’s RB1 this season after running for 354 yards and three touchdowns as a junior.

The versatile DB had four interceptions and 48 tackles as a big part of the Sea Kings’ success in the secondary last season.

Ledezma made 70 tackles, seven TFLs, and 3.5 sacks as a junior. He also had a forced fumble, a recovered fumble, a blocked punt, and an all-league award at the end of the season.

Brooks put in work as an undersized (5-8, 185) NG/DE last season, finishing with 40 tackles, five TFLs, and two sacks, and getting an all-league mention.

Schimm was an All-Sunset League player last season as a junior.

“A lot more individual training unaffiliated with CdM where we text our guys to meet up and we’ll work out,” said senior safety Tommy Griffin on how the Sea Kings have adapted to the pandemic.

“We’ve gotten a better understanding of our offense given there’s a lot more new faces. Same on the defensive side of the ball.

“[The pandemic] put a little bit of a dent in our morale. But we’ve adapted and used it in our favor to get bigger, stronger, and faster.”

While most of last year’s stars were seniors, this is still an experienced team, and a program that knows what it takes to win at a high level. And while the 2020-21 Sea Kings are unlikely to have a top-10 or top-five passing game in the country like last season, they have a chip on their shoulders from being counted out by those who don’t think they can still compete at an elite level.

In addition to having serious talent at the skill positions to make up for lost production, CdM has a chance to be even better in other parts of the game. The defense is loaded before even factoring in breakout candidates like Salmon, or new potential impact players such as CBs Jake Simkins and Oliver Ayala, LBs Nathan Bloom and Charlie Mannon, and DL Gavin Scott. The O-line should be at least as good in 2020, with Bouda, John and Seth Trachtman, and Schimm leading the way.

As for replacing that production, John Tipton, Cooper Hoch, Ryan Zimmerman, are considered breakout candidates to step up at WR. Same goes at TE for Scott Truniger and Sam Weaver (TE/OL) Meanwhile, there is a five-man unit in play to replace Ethan Garbers at QB. Seniors Jackson Oksnee and Cooper Wrenn are likely to be atop the race, with other talented QBs there in non-seniors David Rasor, Max Lane, and Dane Voorhees. If some of those new faces have big seasons, the Sea Kings’ offense can remain formidable.

CdM essentially ran away with a Division 3 Southern Section title last season, and then went on to win a state championship at the CIF 1-A level. That squad finished ranked top-25 in the nation by some sources. The 2020-21 Sea Kings don’t have to be on that level to remain a Southern Section powerhouse.

Don’t be surprised to see them make a run for the Division 2 title, and maybe even make the Division 1 playoffs.

With an entirely new group of playmakers, Corona del Mar may need an adjustment period to start the season.

It’s not unrealistic that the Sea Kings run the table through a difficult schedule and compete for a Division 2 championship. But if they need more time to gel than expected in the midst of a very challenging non-league schedule, it’s possible they slip into Division 3, in which case they’d have a great shot at repeating as the Division 3 champ.

“Covid has challenged us in unique fashion to overcome adversity and we are thriving with a positive vibe about leaning on each other like never before. I wish I knew exactly how we will evolve once competition starts but from a grinding work ethic and team camaraderie standpoint…we are excellent.

“Our goals will always remain the same: League, CIF and State Titles.”

“Coach O’Shea preaches about the idea of ‘WE US OURS’. That motto is instilled in our team so I think we as a team regardless of personnel will always be prepared,” said senior Tommy Griffin.

“I think year in and year out we’re always going to be well prepared, smart, fast, and tough at CdM. Last year we were loaded with talent. I think we’ll be able to make up that talent with the toughest group of 11 on each side of the ball in the county.

“Us winning state last year has added weight to the shoulders on this team’s leaders. This senior class is not even close to accomplishing what we want to, and given the opportunity, we will be ready to go.”