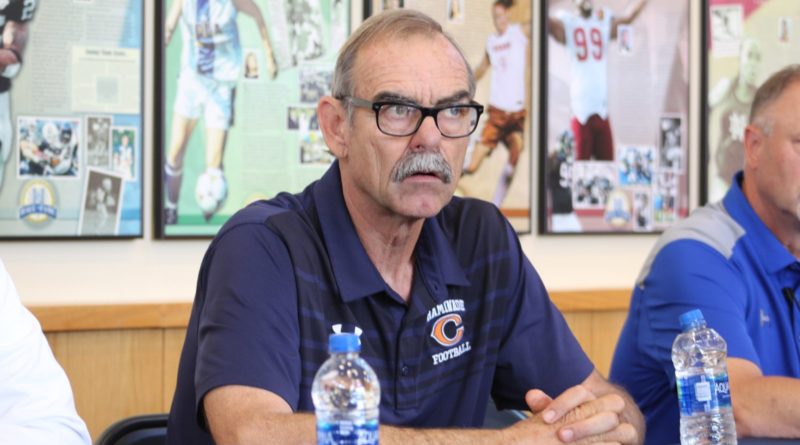 SBLive California is previewing the Top 50 high school football teams in the state ahead of the 2020-2021 season. Even with the season on hold, we will continue to highlight the best teams, players and coaches in California. Here’s an inside look at the Chaminade Eagles of the CIF Southern Section, the No. 24 team in our countdown.

Coach Croson: “Jack has a lot of offers. He was the LA Times all SoCal punter last year. His dad and uncle both played in the NFL and kicked at USC.”

Coach Croson: “Jordan is a three-year starter for us.”

Coach Croson: “Frankie has some offers. He’s a good corner.”

2019 stats: Made 50 tackles and had an interception

Coach Croson: “Ian was first team All-Mission League as a ninth grader last season. He was doubled the whole time in the tournament we played in in Arizona. They knew he was a deep threat and they did everything to take him away.”

IMPACT OF COVID-19 ON CHAMINADE FOOTBALL

COVID-19 has affected every high school football team differently. Coach Croson shares how COVID-19 has impacted Chaminade football over the past few months:

“We’ve had over 90 practices and I’ve probably shot the thermometer at parents and athletes thousands of times. We had a couple parents get sick and one of our kids had symptoms, but besides that we’ve been fine.”

“Our seniors can’t be evaluated because they have no film. They have no live 2020 film, they only have last year’s film. College coaches want to see how the kids have progressed over the course of the year and they can’t right now. We had two kids sign on Wednesday and we have a bunch of others with offers, but they’re not offers that they want to take. They need to be evaluated and right now, they can’t.”

“We went to that passing tournament in Arizona and won it. All of our guys have been working hard.”

If everyone stays healthy, Chaminade could be a seven or eight seed in Division 1, although a Division 2 playoff berth is more likely. Winning a Division 2 title would be a definite possibility in a normal year.

Coach Croson is very excited about his team and is desperate to play. This is a team that will challenge Bishop Amat for a Mission League title and should make a deep playoff push if they are in any division outside of Division 1. Led by quarterback Jaylen Henderson, this is a very experienced group. Ed Croson is one of the best coaches in California and his team has been practicing since June. Whenever they get the okay to play, they’ll be ready.

“Let’s hope there’s a season because we’re going to be really good. First of all, we have everybody back and we’ve gotten some top notch transfers, guys we think who will fit well and will help. We played last year in the playoffs with 16 kids in the ninth grade and 14 in the tenth. Our line is huge and has matured. We’re very experienced there.

“We’re really excited and want to play. Plus, our quarterback Jaylen Henderson has gotten better after throwing for 2,500 yards and rushing for almost 1,000 last year.”

“We’re bigger this year. The big thing has been the weights. We’re going to be a lot stronger team than we have been the last couple of years.”